As the new year approaches, I think of resolutions and admonishments, of things deferred, promises unkept, loyalties betrayed, and chores undone. What exactly is it that we're celebrating, on New Year's Eve? --the passing into historical oblivion of another revolution of the earth around the sun, or the anticipated fulfillments of the next? Or, simply that we've managed to exist a little longer in the vale of blurred regret?
Now in my 63rd year, I'm beginning to admit to myself that, as my time remaining grows shorter, I'm writing things off my to-do list. As a relentless reader, there are books, I now realize, that I can no longer "afford" to tackle, either because they're too long--for the probable fruits of having devoted so much time and energy to them--or because they will never seem as important as many other, shorter, works which I might have the time to consume before the end.
As an x-graduate student in English Literature, and (very briefly) a teacher of literature, I've always felt a duty to "get to" all those titles on all those reading lists over the years, books which, for one reason or another, I've not had the opportunity to pick up and start. Because literature is so plentiful--and not just in English, of course-- it is, after all, being added to at a frightening rate, so that no matter how diligent or efficient a reader any person might be, he/she will never "catch up"-- there is forever an inexhaustible supply of fodder for the consuming.
Even if, assuming one were so disposed, one set one's sights on the "greatest 100 books" of all time (including those translations of works not written originally in one's own contemporary language), there are, I would think, precious few people who have ever actually done it. And people of the kind who would, I suspect, wouldn't be the sort whose opinions or motivations I would find inspiring. The performance of feats isn't what reading is about. Once upon a time, there was Evelyn Wood, inventor or disseminator of the Reading Dynamics Course of speed reading. Speed reading enabled one to "scan" a text, and with practice, to limn the gist from any kind of written material. Adherents claimed they could "read" hundreds of pages of text in a day, with little excessive effort, and consume the content, with accurate recall.
Critics and literary hacks have been trying to steamline the process of selection for a long time, believing that if we could sift out the best books, or the best parts of the best books, we could shorten the task, and so make the goal of becoming familiar with all "the best" literature attainable by ordinary mortals. But all such short-cuts miss the point of real reading. The consumption of classic texts isn't about efficient consumption. It's about having the experience of reading, of sampling and pondering, of going through the process of absorbing the sentences and paragraphs, the arguments, the diversions and divisions of the language, as it opens and unfolds and develops. This can't be abbreviated, can't be packaged or canned or cherry-picked, as if it were a commodity, or a raw material. Literature can't be commoditized into convenient, bite-sized portions. Language can, of course, and there's a whole science of how to make it do service as ad-speak.
It's even true that some authors themselves, wishing to create ever more complex and involved linguistic objects, will write books that are so difficult to read, or to read with anything like pleasure, that almost no one will ever undertake the task, or once begun, will ever finish it. One such book, perhaps most notorious in this regard, is James Joyce's Finnegans Wake [1939]. Quoting from Wikipedia, "Written in Paris over a period of seventeen years, and published in 1939, two years before the author's death, Finnegans Wake was Joyce's final work.The entire book is written in a largely idiosyncratic language, consisting of a mixture of standard English lexical items and neologistic multilingual puns and portmanteau words, which many critics believe are attempts to recreate the experience of sleep and dreams. Owing to the works' expansive linguistic experiments, stream of consciousness writing style, literary allusions, free dream associations, and its abandonment of the conventions of plot and character construction, Finnegans Wake remains largely unread by the general public." That pretty much sums up the problem. For anyone who has actually tried to "read" Finnegans Wake, the frustrations and difficulties quickly mount up, overwhelming one's attempt to comprehend what's "happening" or even what any of it actually means. There have been "keys" to Finnegans Wake published, and there undoubtedly is an underlying system of connections, but the underlying circuit-board doesn't render the virtual experience of its reading any more apprehensible. Joyce knew, without a doubt, that the probable audience for such a work would be quite limited, but that the production of the text justified its resistant style and seemingly insurmountable barriers. I have always thought that the ability--let alone the desire--to write something like this could only be accounted as a sort of "idiot savant" innate aptitude--someone who "thought" in puns, or was constitutionally unable to resist the slippery, risible game of making puns from every word. It's almost an affliction. On the other hand, the sense of "hearing" root-sounds from other languages, or earlier forms, or in alternate contexts, is probably one of the skills associated with language ability, one which is greater in writers (especially poets) than other people. Joyce's insistence upon this verbal "play" is one of chief aspects of his genius; and Finnegans Wake is the masterpiece of that preoccupation. 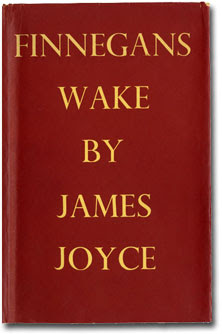 Alas, I am not one of those who loves puns. Language games--indeed, most kinds of word games--bore me to tears. Is this somehow inconsistent with my love of language generally, my indulgent pleasure in texts? Perhaps. None of us is ultimately "responsible" for our individual taste, though we have a duty to set personal preference aside, when judging art or literature on the higher planes of general applicability. Who but a professor teaching a graduate seminar on Joyce, would ever put Finnegans Wake on a serious reading list? 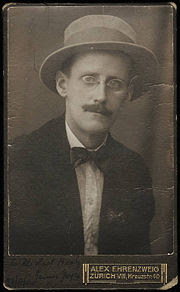 At 630 pages, Finnegans Wake is not a book which I shall ever read, alas. I admire it and respect it, as one does any monument of consequence. I know what it's "about" in its method and approach, and I could, with great effort and spare time, come to familiarize myself with its deeper meanings and ingenious wit, but I never shall. But the ability to describe a work of literature is not to experience it. And experience is the whole point. Alas, again, and again alas, I shall never have that experience. I've crossed Finnegans Wake off my life-time reading list.
Posted by Curtis Faville at 7:40 AM

I did read it and I hope you'll rethink your decision not to read "Finnegans Wake". Perhaps substitute Henry James's "Golden Bowl" or something.

I think you'd be amazed at how wonderfully the language (as impossible as it is to get through at times)inspires poetry. Every page is a goldmine of formalist, langpo, flarf, conceptualist, "read through", concrete,metaphysical,spiritual, pastoral and chance-operation poetics!

Don't discard Joyce. He's too important and too vital.

me and Ronnie Wilson and (our "teacher", Rudd Fleming,
and Eddie Gold and me

and when we had 'finished' it we began again!

Ulysses Ive read, over a period of years--(and Portrait of the Ahhtiste years ago, etc)--and Im convinced the average 'Merican, even in collegeville doesn't generally "get" all the allusions--homeric, catholic, parodies of Anglo, Irish history (including ample hints of anti-WASP, and anti-zionism--which PC sorts of Herr Doktor Profesors overlook), a bit of Ibsen etc--not to say the tongues JJ often switches into--latin/french/spanish/gaelic et al;

A fortiori, a rube (or rubette) is not likely to understand FW, which appears to be rather more daunting--Ive attempted to tackle but find it overwhelming (add sanskrit to the latin/gaelic, etc)--but tackle it I shall, begob. Finish Ulysses, then Wake (that said, Ezra Pound thought it an vast obscure mishmash, or some such so yr in good company Sir F). JJ may have been a genius, but a mad genius.

having read The Wake 1.5 times, the second time a reading-through in the John Cage manner, I enjoyed it immensely. I also discovered that the way to read the The Wake is to read it out loud in an Irish accent, and then it really does seem to hang together. It's also pretty funny.

You don't read the Wake. You live it. It's like a hot bath. You immerse yourself in it and emerge from it feeling refreshed and rejuvenated. Most of the chapters can be read aloud in between one and three hours. Each chapter is like listening to a symphony. After a page or two you begin to hear the brogue that tells you how to read the music. You enter a trancelike state. An hour or two later you get to the end of the chapter and the spell is broken. It's a highly westernized form of Buddhist meditation. Anytime you read a text you are under a spell. Joyce is in a class by himself. The Wake and The Dubliners are really the same book. If you want coherence, read The Dubliners. If you want to understand The Dubliners, read The Wake.

Sorry, but puns just drive me up a wall. In the first place, I get frustrated because I have to stop and figure each one out. That's a terrific task. Word echoes not just from English, but from other languages as well. When I don't stop, I get this horrible feeling of leaving all this stuff behind, building up in a great heap of discarded meanings. It's all so cute and flippant and slippery. Flippery. Slippant. Slibbertyflibbet.

I got tears in my eyes reading your comment:

you don't "read" Finnagin's Wake you SING IT!

Henry Miller was furious with Joyce for writing The Wake. He considered it cowardly, a return to the womb.

Alas, I am not one of those who loves puns. Language games--indeed, most kinds of word games--bore me to tears. Is this somehow inconsistent with my love of language generally, my indulgent pleasure in texts? Perhaps


Actually I agree somewhat with Sir F. here. Joycean prose at times--including sections of Ulysses-- becomes a species of the super-Zany, and however complex a bit difficult to take seriously--not quite, say Shakespeare-clown zany but related (then, most in Consumerville don't understand a scholar-jester such as Feste either, especially after he's been PBSed). Joe Conrad would never have stooped to music hall antics, even polyglot musick hall.


In the case of Ulysses one should recall Joyce usually mocks Leopold and Molly--another point lost in hepcatville, where Molly--common Dublin slang for "cheap whore"--is taken to be a heroine of sorts. There may be a Rabelaisean quality --not just Dante-- but Poldy and Molly are not heroes whatsoever. Without some inkling of latin/euro/catholic tradition Joyce can't really be understood--thus, agency becomes an issue.