Twilight is a time we associate with an indeterminacy of impression, a transition between light and dark, the end of one thing and the beginning of another, neither one nor the other, but as it were a blended mediation between two opposites. The period between the waning years of the 19th Century and the beginning decades of the 20th, is often referred to in art criticism and history as such a twilight period, when society, or the world, hesitated for a while, taking its breath, before plunging into a subsequent period of rapid change and dramatic transformation. The seeds of change were planted in its midst, to be sure, and premonitions of the coming change were everywhere evident, if one cared to notice. To our ears and eyes, this period now appears, in its art and music and architecture, as a scintillating and evanescent backwater, nostalgic, evocative, and melancholy. 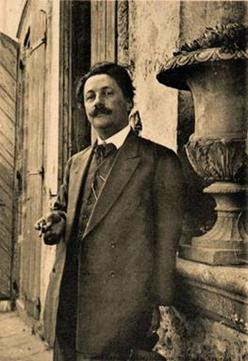 The French composer (or 'musicien') Déodat de Séverac lived between 1872 and 1921, through the Fin de Siécle, Art Nouveau, the Edwardian Age, and, at the end, World War I, the event which would sweep away all the mild presumptions and traditions of the 19th Century forever. Significant figures who came to music prominence during this period include Richard Strauss, Carl Nielsen, Jean Sibelius, Paul Dukas, Erik Satie, Enriques Granados, Isaac Albeniz, Scott Joplin, Claude Debussy, Frederick Delius, Giacomo Puccini, Leos Janacek, Engelbert Humperdinck, Charles Ives, Maurice Ravel, Arnold Schoenberg, Bela Bartok, Karol Szymanowski, Emmanuel Chabrier, to name but a few major figures. Musically speaking, the period was one of great change: The dominant centres of artistic power were being challenged everywhere. In France, the great musical conservatories, ruled over by the Victorian giants like Saint-Saens, devoted to the dogma of the classic-romantic paradigms, would eventually give way, to the work of Debussy, Ravel, Stravinsky, and the other musical revolutionaries of the day.
Severac, though a fully trained and sophisticated classical composer, followed a new trend in his time, to adapt rural or folk culture musical traditions from his native country--a trend which would gain more traction as the new century progressed--and after a period of study in Paris, returned to his native Toulouse, where he spent the rest of his life, composing pieces for piano and voice, as well as an opera. Some of his better known works for solo piano--Le chant de la terre [1900], En Languedoc [1904], Baigneuses au soleil [1908], Cerdana [1904-1911], and En vacances [1912]--show a clear influence of Spanish folk styles (Toulouse is less than 100 miles from the border with Spain. Severac's music is straightforwardly tonal, with clear harmonies and catchy rhythmic figures. Its attraction is its great evocative subtlety and seductive charm. Like Debussy and Ravel, he was often captivated by Iberian "deep song"--an aspect especially evident in Cerdana.1 His approach to the keyboard is not unlike that of Chabrier, or even Fauré (the Nocturnes); but there are passages of sheer motivic drive reminiscent of Liszt or Alcan. 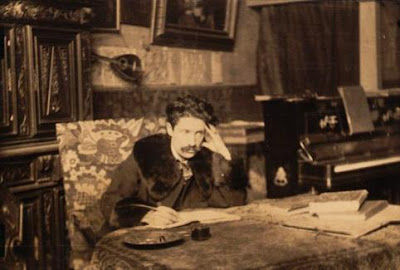 The first music of Séverac I ever heard was the En vacances ["On vacation"],2 a sequence of pieces in a country style, simple melodies which I taught myself to play on the keyboard. They combine the guileless simplicity of school-girl seriousness with a very mature sense of melancholy, leavened with melodies of great delicacy. The pieces are very accessible and should be a part of every serious keyboard student's repertory.
To my ears, Severac's music captures as well as any, the spiritual quality of the "Twilight" of the Victorian Age, at least in music. It rests on a kind of comforting presumption that would in short order be made irrelevant by the events of WWI, a world in which the weapons of mass destruction would be unleashed, and mankind's capacity for efficient killing and mechanized terror would alter forever our confidence in man's potential for goodness, and our supposed innate virtue. This music twinkles in a glimmering summer twilight of time, suspended in tranquillity.

to name but a few major figures

speaking re french impressionist musick, a Zappa thing is going online presently Sir F. Probably a bit raw or vull-garr for you and the CR posse, but in ways, Zappa, at least when attempting serious music was a child of Debussy & co, was he not, as were the best jazzers. In ways, tonal musick ended with Deb.--

Frank (also) did some neat water-colors
he was my age and born in B-more.

we exchanged a couple of drawings...

here is some Zappa 'stuff':

what America needs RIGHT NOW
are more Crazies like Zappa

damn few of us left

interesting collection of Zappa manga, Ed, and I agree wit' you that Merica could use some zappa-ing---musical snobs might roll their eyes--but FZ's musick, while a bit unsavory at times, at least f*ck's with the WASP Herd mind, so can't be all bad. Alas I sorta doubt that even Zappa musick will likely phase the Teabagger-bots or biblethumpers, or the democrat-unionist plebes for that matter (tho FZ and Gail were Demos and generally opposed GOP bootlickers).

I didn't know FZ was an ahhtist as well (his one time crony Beefheart is as well---DVV now near death I hear). Zappa product's still big in Europa as well. I trade some LPs on e-bay at times and poles or germans buy zappa stuff right up--Uncle Meat might sell for $10 in US, but $50 in Hamburg.