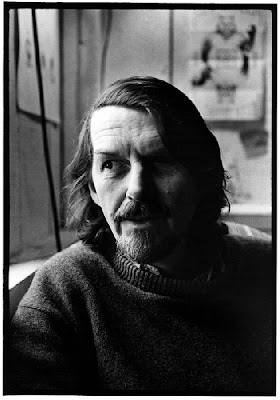 Robert Creeley's move towards a greater concision of form during the latter half of the 1960's signaled a change in his work which may have seemed at the time a sort of logical progression, following tendencies present in his work as the early to mid-1950's. The arc of his development as a poet would ascend through the chronology of his career, reaching a crescendo in the publication of the collection Pieces [1969]. The book that preceded that one, Words [1967], is the literal station of the assault on limitation, presaging and prefiguring the "fulfillment" of Pieces, and defining a crisis of commitment and emotional intensity. The structure of Words begins with an anunciation--"It is all a rhythm" as he says in the first line of the first poem in the collection--referring to the major preoccupation of the first stage of his career, summarized and contained in For Love: Poems 1950-1960, a neat interval of time. If the 'Fifties had been Creeley's devotion to the vivid, eccentric brief lyric, the 'Sixties would feature an increasing liberality, a loosening of the self-imposed bonds, both ethical and aesthetic, with which his characteristic approach to subject and style had been associated.
Ironically this ostensible growing relaxation of emotional tone was accompanied by a counter-trend towards an increasingly spare, abbreviated sense of structure, a reluctance to elaborate, to deploy amplifications, expansions. Symbolically, the closer Creeley got to the full realization of his potential as a poet of minimalist contraction, the greater the sense of drama--which was certainly not lost on the poetry reading audience of the time. As he "approached" the "edge"--both of intensity of commitment to the total investment of a few carefully chosen words--and to a personal relinquishment (a liberation) of the self to the blandishments of pleasure and release at the height of the counter-culture revolution--there was a feeling of anticipation mixed with resolute apprehension. The release, promised in Words--
HERE
What
has happened
makes
the world.
Live
on the edge,
looking.
--meant that Creeley was no longer "caught//in the time/as measure."1 He was free to explore the territory beyond, the untamed precincts, outside the entailments of his earlier successes--in a sequence of poems that occur near the end of Words--"Pieces," "A Prayer ['bless something small but infinite and quiet']," "Joy ['I could look at an empty hole for hours'],"--culminating in--
A PIECE
One and
one, two,
three.
--in which counting's measure is the very demonstration of the place to which he had come. If Words, then, was the promise of an ultimate reductio, the residue sifted from the remains of an abandoned poetic persona, Pieces would be the emblem of that realization, the proof or disproof of the validity of that choice to inhabit language at an absolute limit.
THE FARM
Tips of celery,
clouds of
grass--one day
I'll go away.
Thus this going away signaled not merely a metaphorical death, but a departure from the husked off shells of previous envelopes of identity, exhausted positions, tired versions. Having, then, arrived at a point in which the newly displaced agent of self-hood could ponder, abstracted, over the minutest evidence of feeling in words--there was the inevitable descent, from a heightened consciousness and the ascent to the summit of a vantage (on a mesa in Bolinas overlooking the wide range of the Pacific Ocean)--
THE EDGE
Place it,
make the space
of it. Yellow,
that was a time.
He saw the stain of love
was upon the world,
a selvage, a faint
afteredge of color fading
at the edge of the world,
the edge beyond that edge. 2
--a poem published in A Day Book, the collection which marks the end of Creeley's Pieces period. The Edge both summarizes and closes a period in the author's life, one in which a quest for an ultimate definition--of the closing of a gap between self and form, between the rationalization of affection and acceptance on the one hand, and the true embrace of mind with a luxurious sensual experience on the other--is remarked, and described. As each extent in time is reached, another limit is confronted ("the edge beyond that edge"). Rather than the desired release implied by life on the edge, looking out toward the extent, we have only another installment of the process. Mind (and self) still the limit of its own definition, the skin of its own system of values.
___________
1. "The Measure," pp. 45, Words.
2. From "In London," in A Day Book, Scribner's, 1972.
Posted by Curtis Faville at 6:51 AM


Creeley was a rich kid, wasn't he? Like most in belle-lettres biz--the poor boy types--Bukowski, beats etc --succeed mainly because of luck, hustle, "radical chic", being in the right whorehouse --or madhouse--at the right time, etc.

So, Creeley's Ahht was, by definition, a product of privilege. Bourgeois. Not much different than, say, Alexander Pope (or Eliot and Pound, but....at least EP knew his sh*t). Most humans don't have time for experimental poetry---someone, a Bard X, in the LA or SF 'hoods might write something minimal as well--but it doesn't really matter, since Bard X has no pedigree, no family connections, no ivy league degree, so forth. In Bard X's case it probably makes things worse (yo, Bard X, yoo urkle mutha-f-er)...A bit obvious perhaps, but ....accurate. The poor or middle class writer does well to stick to realism, journalism, documentary/non-fiction. The poesy and fancy belle-lettres are left to the tory pretty boys (or boyettes, or mental patients) .

Pound said the further poetry gets from music the worse it is. It seems to me the objectivists went the other way, toward imagism, and that Creeley went that way, even though he nods toward measure. I can't imagine his work as singable, though, any more than I can imagine Eigner's as singable.

I myself rarely think about music, but heard We Are The World coming in on the radio this morning, and decided to use the music, and import a nice selection of words into it. I wonder if you can top this?

A choice was made for us
We were born into a world
Without tea and crumpets
It's time for you to make my day
So just start giving!

We are the 3rd world
Only you can save our lives
So just start giving!


We are the 3rd world
We are their children
So just start giving!

There's a choice we didn't make
And you have to save our lives
So there'll be even more of us
So just start giving!

NB: I hope this gets people into a generous mood in time for Christmas. Like Michael Jackson, I will donate all profits to charity.

Pound played a few musical instruments (supposedly a fair violinist) and was an amateur composer, and wrote some interesting things on music. Did Creeley??? I doubt it. Does KO? Maybe a kazoo---or shofar!? For like chanukkah. Draydul draydull draydell