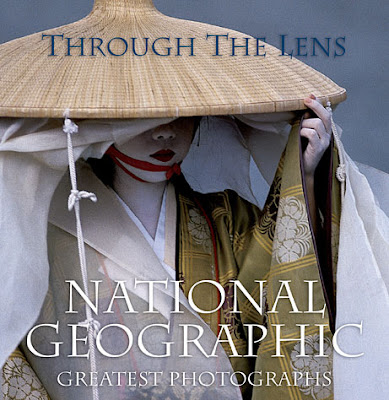 The excellent photographic monograph Through the Lens: National Geographic Greatest Photographs [Washington, D.C.: National Geographic Society, 2003], naturally emphasizes images from over the last 20 years or so. In its early years, the National Geographic magazine was more documentary, with a quasi scientific bent, but it has evolved into more of a pretty picture magazine, picking up where Life and Look magazines left off. It now seems to concentrate on animal stories, and third world venues--it's become kind of a PBS documentarian.
As a kid, I was given subscriptions to it for several years in a row, but something about it put me off over time, its tendency to take middle-of-the-road positions weakened whatever advocacy it might appear to be favoring. Its writing was not very inspiring, and the photos, though often effective, usually weren't great examples of photographic art.
But that's changed too, over the years. National Geographic now is one of the few organs where unique, quality photographs can still be published and viewed. Though its mandate now is "inspiring people to care about the planet" instead of documenting the exotic or scientifically research-worthy phenomenon, it keeps a high standard of taste in the mostly journalistic color shots it selects. Many professional photographers build their entire careers around National Geographic imagery. 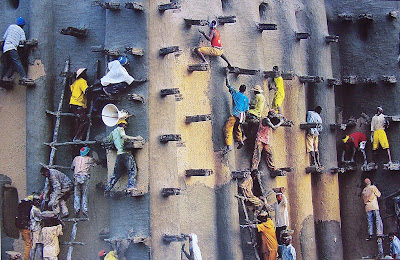 The image above is one of the best of its kind, certainly from a purely pictorial point of view. Ordinarily, professional colorists will unashamedly alter the color balance in making a print from emulsion exposures or with Photoshop@ software techniques. But the above print would work even with significant variations of color balance. (Click on the image to see it in larger format.)
What makes it so astounding is the purely gratuitous color combinations caused by the random variable pastel clothing of the workers, whose brilliant panchromatic variety is vividly and pungently contrasted with the rough muddy surface of the wall they're clinging to. The reinforcing timbers which protrude from the vertical surface of the wall, are like punctuations of the total compositional matrix. It's a tapestry of labor and activity, spread out like a canvas to illustrate a cooperative building effort, a community project, presumably. We don't know what the building is (without looking at the caption), but it's a big, important structure, one the whole social fabric invests in. You would get nothing like this in the Western World, where labor is much more specialized, and technologically advanced. Too, no building group would be allowed to work this dangerously, without any safety measures whatever to protect those laboring at many tens of feet from the ground. Those ladders are just medium-sized branches lashed together with twine or bark. This is a resurfacing job they're doing, not a constructive build.
In any event, this is an amazing shot. Workers make repairs on the walls of the Great Mosque in Djénné, Mali. @2001, Esha Chiocchio, a photographer working out of Santa Fe, New Mexico.

Not just photography but writing is exemplary. I subscribed to 'National Geographic' for years & used to read it voraciously: hoping to teach myself the 'world'.

I still think it's the world's best magazine.