In a previous post on the work of Max Douglas [1949-1970], I said the following about the premature death of poets: The sense of loss we feel in the work of one so young, on the threshold of discovery and achievement, is like a stillborn birth. If we could undo the past and open a door into possibility, we would never "know" what mightn't have happened. We can't not know what we think actually did happen. And so the dead young poets of the world spin endlessly in a sort of limbo of possibility, half in the world of make-believe, half in the world of reality. [They] remind us of the duty we bear as survivors; we carry the burden of their promise as talismans of inspiration into the future.
Joe Ceravolo [1934-1988] died at age 53 of cancer. By that point, he had already become famous, as perhaps the most original lyric voice of the Second Generation of New York School poets. Like most people who didn't live in New York and weren't familiar with the St. Marks scene during the 1960's, I first discovered his work when Columbia University Press selected his Spring in This World of Poor Mutts as the first Frank O'Hara poetry prize volume in 1968. His work got a lot of publicity for this, and the book's oddness and originality were immediately recognized by the larger literary community. I had read his poem "Ho Ho Ho Caribou" in the Paris Review #44, just before the Mutts book came out, though I wasn't sure what to make of it. It looked and sounded like major work, but having nothing else by which to compare it (for context), I was baffled and intrigued. Its author was a New Jersey guy with a wife and family, and worked as an engineer. Which made sense: the poems seemed at moments to be almost like empirical experiments in neurological apprehension, using ordinary language to explore unusual sensations and feelings about being in the natural (or man-made) world. The thing about the work was that everyone who read it immediately "got it"--that is, it wasn't difficult writing, it was very approachable and seductive, simple even. But like all things miraculous and easy-seeming, it concealed a clever and inquisitive mind behind it. 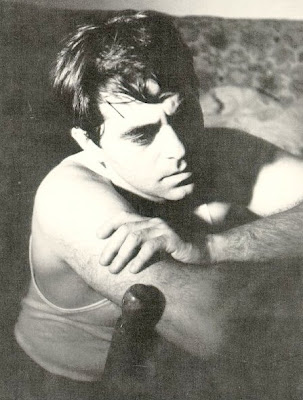 The "home-made" tradition in American verse has been traditionally identified with the work of William Carlos Williams--and behind it that of Walt Whitman. This isn't the place to go into the aspects that make Williams a down-to-earth-American-original-household-brand-name, suffice it to say that his influence has been primarily in two areas: prosodic innovation, and native American subject-matter. Williams was a small-town physician who lived in New Jersey, just as Ceravolo did. Williams was among the first writers to take on red wheelbarrows and green broken glass and chickens in the rain, instead of nymphs and gods and wraith-like apparitions, and probably the first to do it successfully. 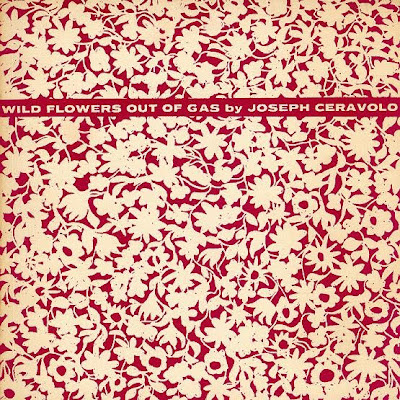 There are a great many things one can say about Ceravolo's writing, but the most obvious observation is that he's interested in the phenomenal, how forces and mass are expressed and perceived, felt. In his poems, different contexts and conditions rub up against each other, slide, slip and slither. He's interested in the natural world, almost the way a scientist is. This produces a poetry that is superficially jagged, fractured or "cubistic" in structure, broken up into adjacent planes, non-syntactic atonalities or fragments. At its best, it's fascinating exploration into the relationship between 1 thought, 2 feeling and 3 language; where language must bear the burden of whatever incompatibilities may occur between the other two. This is certainly process, but not process in the sense of manipulation. More as a listening and intuitive interplay between mind and impulse: What do things really feel like?
Heart Feels Like Water
The fish are staying here
and eating. The plant is
thin and has very long leaves
like insects' legs, the way
they bend down.
Through the water
the plant breaks from the water:
the line of the water and the air.
Told!
The poem feels like an investigation into the experience of watching fish in a pond, edged with grass. But the line-breaks set up a naive credulity, against which the startling metaphorical descriptions achieve an artless delight: "Through the water/the plant breaks from the water" startles you with its description of how light is bent through clear liquid, in the same way that leaves may seem resemble insects (Praying Mantises???--or those South American bugs which are camouflaged by looking exactly like leaves?).
The planar membrane between liquid and gas ("the line") is realized with a single exclamation "Told!" like touching the surface with a majic wand. The poem, it seems, very much asks us to take it as a kind of magical occasion, in which intensity of apprehension and vivid empirical data are presented as directly as possible, without any margins or insulation. Insulation from direct apprehension of the object is exactly what Ceravolo's not trying to do!
from Ho Ho Ho Caribou
1
Leaped at the caribou.
My son looked at the caribou.
The kangaroo leaped on the
fruit tree. I am a white
man and my children
are hungry
which is like paradise.
The doll is sleeping.
It lay down to creep into
the plate.
It was clean and flying.
10
Like a flower, little light, you open
and we make believe
we die. We did all around
you like a snake in a
well and we come up out
of the warm well and
are born again out of dry
mammas, nourishing mammas, always
holding you as I
love you and am
revived inside you, but
die in you and am
never born again in
the same place, never
stop!
Startling statements are enjambed with unusual (primitivist) imagery. The disjunctions are refreshing and dramatic ("am/never born again in/the same place" or "my children/are hungry/which is like paradise"). With just a handful of simple effects, he's able to summon up a kind of ritualistic game of archetypes and/or fetish-objects. There's a light sense of play which liberates the otherwise somber assertions from their moorings. It's not unlike the sense of surprise you sometimes get in a Williams poem, the way the poem unfolds jerkily, or ricochets off successive hits like a pin-ball zig-zagging down a maze of bongs and crooked lanes. 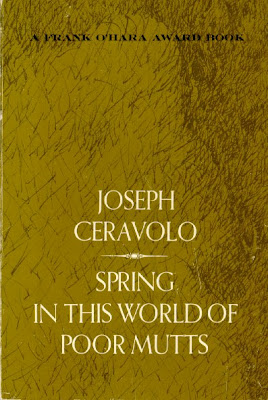 from The Green Lake is Awake
I saw three girls
passing, going to work,
yet the whole street is
moving away.
*
A dog walks over to the
little boy. He walks over
sideways and bashful.
*
If you can imagine
a park, then you can
see this crushed lollipop.
*
Paul is watching me. His
eyes get sleepy with intensity.
He looks like he's
going to sneeze.
*
The duck is bobbing up and down.
It stays almost
in the same spot
as the water under it
moves away like a river.
*
Orange soda.
Distant voices.
_____________________
May
I am lost.
I had swum before.
There is no deformation fatigue
Residual under salt water
Morning oh May flower! oh
May exist. Built.
When will water stop
cooling? Built, falling. Reeds. I am surprised.
Weakness. Torsion.
The wind, white.
Sapphire, oxidation. Million. . . . . .
Fire of Myself
What I miss most is
that live
that subtle transformation
from inert to
trans-atomic structures
that leaves my welded
and supple body
that carries the imprint
of that body
into the land
of pure migration
* * * * *
Meandering through my own consciousness, I can see how Ceravolo's work influenced my own, like these random examples culled from my own collected early poems:
The blunder
forward
rocks
the boat--
under
water
under
water
*
Water giggles, happy with itself?
Though it needs some seriousness
About itself to make the
Contradiction into
A rubberband.
*
a siren
is a glass of milk
in the morning--
pulsing
*
Ceravolo can't be forgotten. In this age of instant reputations and instant disintegration, it seems like the culture's memory is never more than a click or two away. Poems sit stubbornly on the page, and the world's exploding archive of data buries us all under an insupportable burden. Allan Kornblum published The Green Lake is Awake: Selected Poems by Joseph Ceravolo in 1994 [Coffee House Press: Minneapolis, 131 pages]. Introduction by Kenneth Koch, who had been Ceravolo's poetry teacher way back when. The wonderful thing about him is that his work--though contemporary with an entire generation of writers in and around the New York area, who shared an active interest in experimental writing--is nothing like theirs. He wasn't a poetry groupie slavishly following the well-rutted career path of would-be hangers-on/academics, he had "a life" separate and distinct and integral to the "real world" which fed directly into his imagination. He was pure. And in that sense his writing gives one hope--amongst all the clawing, grasping, greedy ambition and envy which seems to infect the world of art and literature, his work was a made thing, clean and necessary--as refreshing as a soda on a hot summer afternoon. 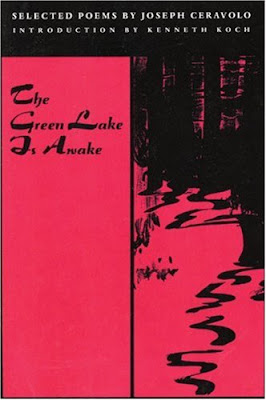 Posted by Curtis Faville at 8:48 AM

This work does remind me of Larry Fagin's work.

I had never read this poet. I don't like it that much, but it isn't terrible.

Was he a smoker?

What did he do for a living?

What kind of cancer was it that killed him?

Fagin is a rough contemporary, though they led lives quite different.

Ceravolo was some kind of practical engineer, I believe a civil engineer.

I don't know if he smoked, but in one of the pictures of him, he's holding a butt.

It's difficult to quote Ceravolo effectively. His work is elusive, and the more you read it, the more there is, and familiarity isn't a problem.

He isn't telling stories, and he isn't trying to inspire the reader to religions transcendence. He's after something else. I don't feel he and Fagin have anything much in common.

Cash was ..ah contend a ...more authentic voice, however raw, as far as pinche ingles go, than WC Williams and his schoool of word- decorators (and Ezra Pound.....welll sometimes his ahhty-self was too much)

the ghost of Wordsworth agrees, ah wager. Not to say Wesley