The history of Western Art had been the progression--despite a series of setbacks and false leads (like the Dark Ages)--of an increasing mastery over accurate representation, or verisimilitude. This trend underwent a deep transformation in the 20th Century, as photography and electronic imaging supplanted the hand, as media replicated our apprehension of the known: Seen, heard, followed, imagined.
Brain research suggests that we "build" the dimensions of the known out of a set of cognitive models, and that our sense of the structure of "the world" is a parallel version of "reality."
As the ability to create a third thing--the artistic object--by which to represent this "reality"--began to decline, the importance assigned to the mastery over the medium has tended to fall, leaving a residual core of insight or meaning. The artist's gift now is interpreted as the ability to see meaning and beauty, and this meaning and beauty isn't simply in the ability to create or interpret a meaningful representation in a resistant, timeless form. Most aesthetic theory now acknowledges the ephemeral and the performed as valid artistic representations of man's response to the world and his place in it.
What we know of human artistic artifact is the consequence of the endurance, the survival of objects. Through archeology, and accidental preservation, we have a rough, incomplete picture of what man made through time. Historically, we have both the works, and in some cases the text of what artists or society thought about art.
Occasionally, an artistic enterprise appears that can have only an ephemeral existence, and cannot last. This temporariness may make it seem less substantial than finished, enduring objects. If something doesn't stand the test of endurance, how can it even hold the value of its form or meaning?
The work of Bill Dan exists somewhere in a limbo between performance art and traditional sculpture. It's a skill--perhaps a mystical ability--but the artifacts it leaves in its wake are so fragile that the experience of them can only survive as a report, a photograph, or as an instance of direct experience. 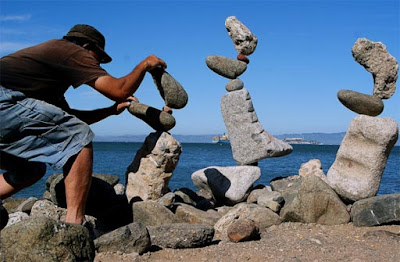 Everyone, I presume, has seen a juggler, the nimble performer throwing balls or spinning plates or kicking hacky-sacks, sometimes while doing something else. These performances are feats, or learned skills--impressive, sometimes even miraculous, but we don't think of them as art per se. Performance art, on the other hand, may not have any inherent skill or ability associated with it; the idea or narrative or ingenuity of the presentation may be the point itself. Where does the "art" of Bill Dan fall in the artistic range? 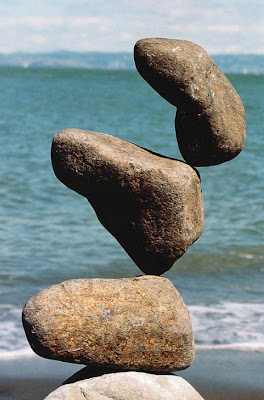 The ability to balance objects against the incessant, predictable, even pull of gravity is certainly a skill, like painting or drawing or playing an instrument, or juggling fruit. But stacking irregular piles of eccentrically shaped rocks seems somehow more elemental. And stacking them in precariously insistent forms, where the points of balance are so tenuous, truncate, and fragile, does seem a very ambitious form of making. 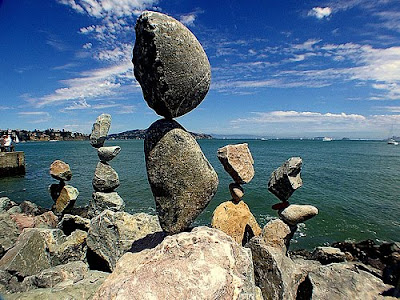 Working in public, along the riprap shorelines of the San Francisco Bay Area Peninsula, Dan has managed to achieve a world-wide reputation as a "rock sculptor" or "rock balancer." The charming faux-amateurishness of his quest for improbable balance makes his work feel as if it is itself a kind of balancing act--between sheer audacity, religious patience, and incredible intuitive touch. 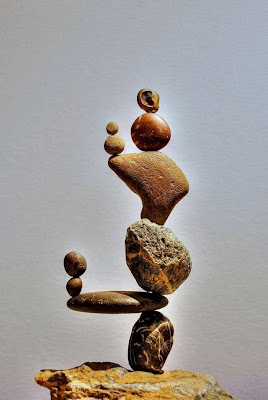 Does Bill possess some strange, special power over objects--specifically stones--that enables him to find their centers and set their tandem positions according to some ineffable formula which he's able to locate in naked space? 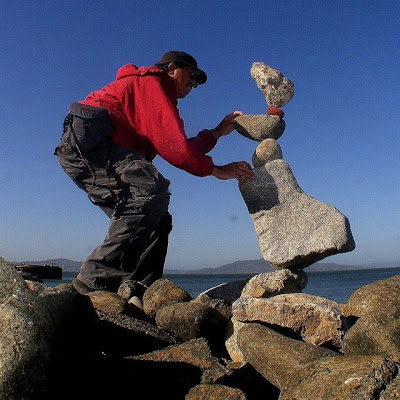 There's a tantalizing sense that the balance thus achieved--delicacy and weightiness poised at the edge of (im-)probability--like a weight-lifter on tiptoe--brings delight and disbelief in equal measure, made more poignant by the knowledge that these arrangements cannot survive the ravages of the elements, much less the depredations of man. 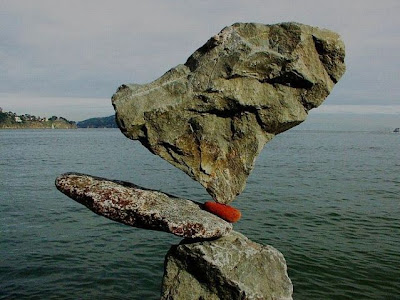 Indeed, it's this fragility and ephemerality which underscores their beauty, as momentary glimpses of some divine mediation between mass, shape and time. 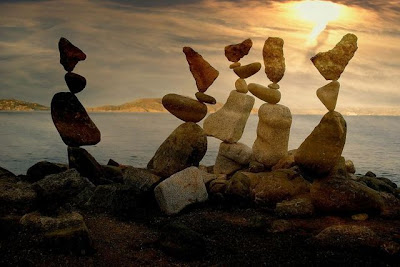 There's a quiet, playful, joyous simplicity about them, which suggests a childish innocence, a delight in the found object. 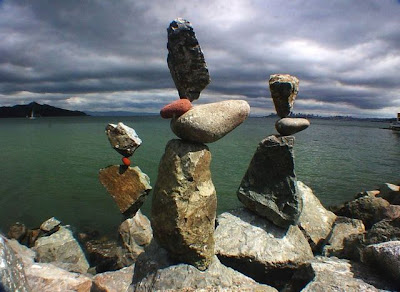 Unlike Duchamp's readymades (which deal primarily with man-made "ready-mades"), or Andy Goldworthy's methodical arrangements of forms in natural settings (which work off the contrast between natural and artificial form), or Robert Smithson's landscape manipulations (which challenge our sense of the cultivated picturesque), the work of Bill Dan employs found materials to create a fleeting, formal arrangement, where the artistic skill and achievement is expressed through the act (the performance), and subsequent temporary model (artifact) of the event. 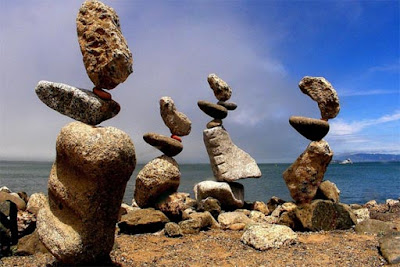 The rock sculptures he makes thus hold the residue of the process only long enough to prove his realization, but then pass back into "nature" and time, nothing lost, nothing wasted, nothing harmed. 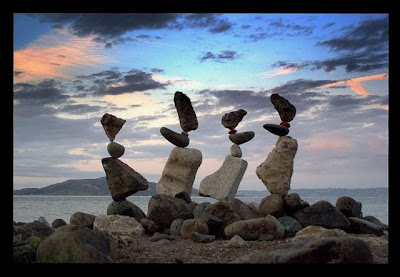 Ecologically, they're perfect examples of a passive response to change, decay and the possessiveness of most artifact-based artistic enterprise. There's no "value" in a tumbled-down aftermath of rubble. 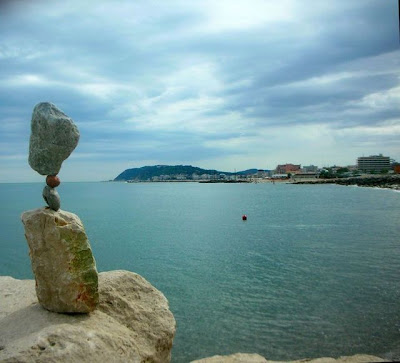 Metaphorically, these rock "piles" or pyramids suggest a timeless quality that goes all the way back to man's earliest kinds of inquiry into the world. And Dan's efforts suggest a kind of discipline which is clearly religious in its dedication, care, respect and uncomplicated joy. Underneath that joy must also be frustration, consternation and some self-doubt. For each achieved balance, how many failures, tumbling in a heap at his feet?
Dan has taken the house-of-cards metaphor to an absolute limit, and the results are stunning. Asked about the "meaning" of his work, he replies that "Some people try to make things too complicated. This is the opposite." Dan is a craftsman, but his craft seems so original and ingenious, that it could never be codified into a system of processes or skills. He's one of those odd birds who found an ability in himself that no one had ever really exploited. What's interesting, too, is that there is no envy or covetousness in his art. It can't be speculated or stolen or enterprised. You could try to copy him, but what would be the point? Riding a unicycle is fun, but you wouldn't do it as an artistic act. Bill Dan has found aesthetic gold among the rocks on the shore of time.
Bill Dan's website, Rock on, Rock ON!, contains more information about his activities, and Really funny stuff has lots more pictures and a video.
Posted by Curtis Faville at 5:13 PM

Another balanced stone artist, with a poetry career, articulateness about the same issues you discuss, and a photo book on his stone-balancing practice entitled Axial Stones from North Atlantic Books, is George Quasha.