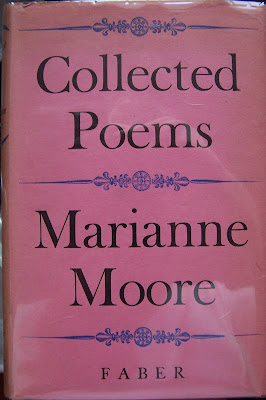 Ah well Stendhal for a day or two.

Now back to butterflies--though modernist ones, and...fem at that-- at The Schizo Rose. :]


Does Dreiser eat brunch with TS Eliot, CF? Nyet. Maybe he should have once or twice, but.....perhaps TS Eliot shoulda had some ham n rye, watched the yankees vs dodgers with some cheap beer a few times as well.

Restraint and decency: did Ginsberg possess these qualities? Did Whitman?

Moore didn't like Whitman much, and was scandalized by Ginsberg's proclivities.

Her poetry has very great virtues, but there's reason to believe that other virtues can ALSO be found in poetry, too.

What is amazing for me is not that there was an audience for Ginsberg and Whitman (they would have created it had it not existed) but that such a big audience exists for Moore's work.

Her work is VERY difficult, and rather quiet.

Plus, she's not a brawler for the leftist factions: she liked Taft as a youth, and liked Hoover even as his popularity plummeted in the later thirties, forties, fifties, sixties.

She had a black maid for the last thirty plus years of her life, and left a big chunk of her $400,000 estate to the maid.

That's not a well-known fact.

She was very clever about getting her work out. Editing The Dial helped, but her work always found its way into big vehicles.

New Yorker, Atlantic Monthly, and so on.

Right frmo the beginning she had that kind of star-quality.

She went far for a girl from a very small town in central PA (Carlisle is just a hop from Gettysburg, where she is now buried).

Well, I didn't know about the large estate. That would make sense in terms of her scrupulous scrimping turn of mind--nothing wasted. One imagines she counted pennies. I can see her, with one of those little change purses, at the post office, putting down exact change and watching the transaction very closely. Like the little landlady in The Lavender Hill Gang.

I think Moore would have regarded the rashness with which we discuss politics online, as a kind of sin against good taste. One didn't, after all, smoke cigars on the street!, or argue politics in the parlor!

I went to her church and met an older black woman who was appalled at the day's sermon. The pastor talked all about social good deeds and very little about Christ.

I asked her if that was the norm back in the day and she said Good heavens, no one then talked about politics. It was no one else's business what you thought. Now, she said, it seems to be the first thing on everybody's tongue.

She was African-American. She regarded MM with tremendous affection, as everyone who I met who knew her, did.

TREMENDOUS real love and affection. Not JUST honored to know her, but somehow, life-giving. There didn't seem to be a nasty bone in the woman's body.

Comparing her work to that of the Whitman gang (KO's....ahem......old amigos)...about like comparing Erma Bombeck to Jenna Jameson (well not to flatter beatCo).

Part of the money came from the mother's clever real estate schemes. They owned houses in the midwest and in Carlisle, and got rent from them. The mother was very clever with money. Moore made some money from her poems, though not much. She was getting about a hundred dollars for a poem from the New Yorker in about 1960. That would be what now, 700? A Thousand?

No poet probably could live strictly on royalties. Billy Collins has made a small living, as did Ginsberg. Both were very aggressive about readings and publicity.

Moore made a little money from her work for the Ford Co. naming the Edsel. Her names didn't get through, of course. It ended up named after the owner's wife.

And she did work quite a bit, but usually only half-time. I don't know how much she got for her essays. Not a lot. She also taught quite a bit. She taught in Carlisle, and later at various summer university situations. Plus, she had some friends who gave her money. Bryher for instance gave her a stipend, and I think some others helped her, too.

Actually, J, I can't think of any reason to "compare" Moore to Whitman. Certainly one could make an argument that Moore derives to a considerable degree from Dickinson. They both used meter and rhyme, though the comparison would widen after that.

You tend to state things in very broad generalizations. I'd be interested to hear you discuss some of your references with greater specificity. I know you're not a "creative writer" but your thoughts on on these subjects would be of interest.

Actually on the generalization meter, KO quite outdoes me. As do you often, CF. KO's discussing royalties.

Moore's verse seems rather formless and imprecise to me, too unlike Emily D. (So...in a sense not unlike Walto) Not that I really care for ED either but IIRC she used the hymn forms well. Her attempt at being "intellectual" doesn't impress either --"modesty is a virtue". Heh. She was in the wrong business, then IMHE most poets are. They're too lazy to write novels or plays and don't have the spine or honesty to enter journalism, or something like that

Then my real comparison was Plath to Moore, and to me Plath seems quite "more innovative" however shocking or even ugly some of her writing is--SP also understood form to some degree.

I am a creative writer btw but not a poet--more interested in fiction--, history, science-writing, philosophy than verse. But at times I read p****y. Rilke, even ein bisschen Deutsch. Or the older stuff like Coleridge and Shelley. Ive read a bit of Pound's Cantos not always understanding but admiring--.
an old Robinson Jeffers book which entertains at times (tho unlikely EP would approve). I still enjoy 19th century lit--EA Poe, Crane, Bierce, a bit of TWain (not Melville too much who I think greatly needed an editor). Nietzsche, even some...logic choppers (ie, St Frege) Then realists, FScott Fitz. history of WWI /II. Hem. Detective writing. Chandler. some sci fi. Ms Moore sounds like a schoolmarmie or...maybe female pastor. What did Dr Johnson say about the lady preacher?? "A woman preaching is like a dog walking on its hind legs....It is not done well; but you are surprised to find it done at all."