Libya - Can We Afford Another War ?

Recent events in Libya have once more raised the question of U.S. led international intervention, as a loose coalition of forces (and now NATO) has conducted a broad campaign of bombing strikes against Qaddafi's forces.
The Libyan unrest followed closely on the heels of instances anti-government protests in other countries in the region (Egypt, Bahrain, Saudi Arabia), though this was the first instance of outright armed conflict. Rebels were reported to be fighting in major Libyan cities, but were being beaten back by Quaddafi's loyal forces. 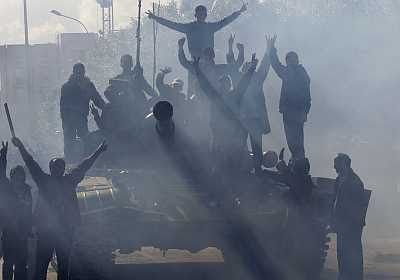 The decision to intervene with American military power, without consulting with, or obtaining authorization from, the Congress, follows a familiar pattern of abuse of this kind by the executive branch. Korea, Vietnam, Iraq. These were wars of choice, begun surreptitiously, and then expanded progressively over time with shaky "resolutions," and defended as growing obligations and commitments of "honor" and purpose. Though the cases differ in significant ways, the arguments used to support them are always the same:
"We must DO something!'
--mutates into--
"Honor demands that we not abandon our duty!"
--mutates into--
"We must finish the job!"
But in every case, once a conflict has begun, we always find ourselves in a quagmire in which military, political and ethical choices become ambiguous. "Victory" becomes a mirage, continually receding, until, after long last, exhaustion (and bankruptcy) causes an abandonment of our original decision to deploy. Right now, "victory" in Afghanistan, "stability" in Iraq, have become illusions. The American people know it, and no amount of careful backtracking by toady generals or diplomatic apologists can make it sound right. Months--perhaps even weeks--after we leave those nations, they'll fall into chaos, and the outcomes will almost certainly not be to our liking.
And now the generals and diplomats are telling us we have a "moral obligation" to intervene in Libya. Quaddafi is a bad man, he's killing his opponents, and something must be done. But what? And what are our real aims?
In each instance of these "interventions" we seem to need to feel useful and justified to influence events and make a good outcome. But exactly what the limits of our intentions are, and how we propose bringing them about, remain vague and indeterminate. It's just this vagueness and lack of specificity which are the key to our failures.
Are we willing to "abide" by an outcome limited by our ability merely to prevent Qaddafi from bombing his people from the air? Is a "no-fly zone" all we want to set up? Or do we really want to see Qaddafi deposed? If that's the real aim, then "boots on the ground" will almost certainly be required eventually. Are we really willing to start a "third front" limited war in Libya? And if so, what does that willingness tell us about the progress of our foreign policy in the years to come? Are we obliged to intervene in every case in which a civil unrest (or "civil war") begins? We know how successful such ventures have been in the past. What is the evidence that were we to unseat Qaddafi, we would be able to "manage" the creation of a new government, and rehabilitate another entire country, as we have been doing for a decade in Iraq and Afghanistan? How much, indeed, can we "afford" to do to help nations which fall into chaos? We've seen dictatorships come and dictatorships go, but the pattern which emerges from these conflicts is never certain, and seldom favorable to our interests. As with many things in life, it's often just as effective to do nothing, as it is to jump into a fight amongst strangers, whose loyalties and interests we don't share.
It is painful to watch a people rise up and be put down with vicious force--especially by someone as lawless as Qaddafi. But the alternative may no longer be a luxury we can afford.
Posted by Curtis Faville at 3:59 AM

gee... next thing you'll see is us going into Darfur to "save" humanity ...with bombs. Imagine that.

meanwhile our Foreign Policy? It is modeled after those most recent "bus drivers" ... The Bushes.

The decision to intervene with American military power, without consulting with, or obtaining authorization from, the Congress, follows a familiar pattern of abuse of this kind by the executive branch


I agree with that (but not with the GOP suits using that line)--indeed ObamaCo has been sounding rather Orwellian, as in "this is not warfare, but needed military action" or some sh*t like that. 100or so launched Tomahawks looks like warfare--though the usual d-Kos sorts of liberals have barely raised their voice. That said, the French and Sarkozy don't f**k around, regardless if one approves or not. They're probably 3rd or
4th in the world in terms of military power--ahead of UK now

Well, well, Anon, what a pleasure!

Want to get sarcastic?

Our little adventures in the Middle East have cost us something north of a trillion and a half dollars, and there's no end in sight.


A nice little piece of change, by anyone's standards.

Hey, here's a cool idea! Why not let each American write off the wars on his/her tax return as a "business" expense, since our primary creditors are, as usual, the American war materiel industry? Won't work? Shucks. But what about the survivors and widows of the dead? Guess we'll have to give them IOU's. Stamped "PAID"!

Remember the "war on terror"? That was a clever little trick, wasn't it? Since I've been terrorized by deer in my yard, this year, I vote to authorize mass poisoning of all the animals in the neighborhood. And everybody gets to shoot animals from their porch. And everybody gets to pack a side-arm, just in case they encounter something moving in the bushes.

But wait!, I've saved the best part for last! Pentagon "situation estimates" of the "viability horizon" in Iraq and Afghanistan, once we leave? Six months, give or take a few weeks. And their solution = indefinite occupation, at least until 2020! Abbondanza! We couldn'a written a better script!

I vote to give Obama full war powers at once. We need to protect Libya from itself. And while we're at it, isn't it about time we marched in and laid the law down in North Korea? Isn't it about time we squelched that little prick clapping on the balcony? Damn straight!

Posted about an hour ago.

Anyway, one of Khaddafi's sons defected, supposedly. As have other leading LIA people.

He's a tyrant. Support your President, CF--
President Hillary. Besides, NATO is now involved--ie, RAF. God save the Queen, and all that

It's dumb, and we can't afford it--in any sense.

All we really want, in the end, is someone who'll sell us the oil for reasonable prices.

Bottom line, we don't care if people die, as long as our conscience feels good. We willingly kill tens of thousands of people in Iraq and Afghanistan who believe things we don't. That's the reality.

it s ALL about The Economy..

how else to keep those soldiers in a job?
or those bullet/bomb/fighter-jet. makers in business
who makes our tanks... Chrysler?
boots-on-the-ground means millions of pairs of $300
a pair .....leather boots and helmets and M-16s and
ditty-bags, etc... I
guess we are not "in Libya" for the same reason that we are now back in Afghanistan... all of that surplus munitions and equipment and soldiers were already in the area (remember Iraq)


economics... use the surplus war "stuff" to run-away to fight another ..."Nasty"

it s like what we did with all of that surplus Napalm/Agent Orange..

dump it on Columbia and wipe out ..."them"

imagine what would happen to our "recovering"
economy
if we ended these phony wars
where in the hell would all of those returned vets get jobs?
I guess that they could all go to University and learn how to Poet-on-a-Blog... then get meaningful jobs teaching
How to Shoot Bullets at "Them"


I went up to the Army Surplus store this winter to get an army "wool" blanket... they used to be 100% wool
AND made in America
NOW?

it s really not about "humanity" or "democracy" or, even "oil"..

we got a government of Empty Suits running things..

well, Leave It To Beaver is now on RTV.... gotta go

The bathroom is upstairs and just to your left.

I made a mistake it was Nicaragua where we dumped all of that surplus Napalm...
not Columbia..

we had yet another ... Empty Suit running things then...

Only goes so far.

Hate missiles, jets and machine guns. Better, like sedation for the macho men. Thorazine. Zine for the peoples, y'all.

Davey Cameron now appears to be calling the shots (ie, it's NATO, not just usa). Torys are always wrong.

That may be some points in favor of Isolationism, the Fagville doctrine--though unknown to many, there are ...some AQ jihadists in the rebels' ranks (says the Counterpunch gang).

Or rather, back to Camus-land. In need of 'Zine. Either way, I suspect the NATO gang will win this one.