Fine printing and binding has always been a sort of side-interest of mine. When I was attending the Iowa Writers' Workshop in the early 1970's, I took the opportunity to attend Harry Duncan's Typography course at the print lab there. Iowa at that time enjoyed the luxury of having two of America's finest letterpress printers--Duncan, and Kim ["K.K."] Merker--at the same time. Their presence during this period fostered not just the production of a series of fine letterpress editions [through Duncan's Cummington Press, and Merker's Windhover and Stone Wall Presses], but a setting for the appreciation and practice of hand-printing as an art form. I spent many nights laboring over my own book project at the lab, once inciting Harry's ire for not clearing the press "bed" before leaving late one night. A close friend of mine at that time was Al Buck, a local denizen of the fine printing scene, who later would print the first issue of my little poetry magazine L. The values of fine printing were instilled in me then, and that interest has in part driven my preoccupations in the antiquarian rare book trade, which I've been pursuing for the last 15 years, more or less full-time since 2001 when I retired from my government job of 27 years. 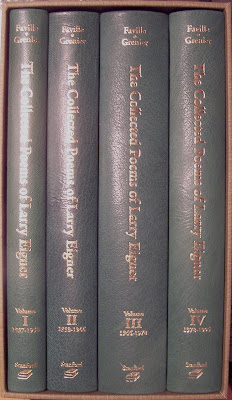 When Stanford finally published The Collected Poems of Larry Eigner, edited by me and Robert Grenier, the idea of having a limited fine bound set seemed a natural opportunity. Over the years, I've funded a number of projects for boxes, rebindings and so forth, either with Klaus Roetscher at the Pettingell Bindery in Berkeley, or with John Demerritt in Oakland. Through the generous support provided by Richard Eigner, Larry's surviving brother and Executor of the Eigner Literary Estate, we were able to create a limited set of 10 copies of the Stanford edition, hors commerce, for the Editors and Eigner family members. The limited has green leather spines, tan buckram cloth boards, and a sturdy cloth slipcase.
The critical reception for the Eigner Collected is in its earliest stages, but interest is building in the academic community, among graduate students and scholars who are now able to see, really, for the first time, the range and depth of Eigner's great mass of work--its quality and innovations. The Eigner Collected was a dream of mine born 35 years ago, now finally come to full fruition. I feel privileged to have had some small part in bringing it into being.
_______________________
Check out my update/addendum on the announced probable takeover of Peet's Coffee Company by Starbuck's, on my previous post of March 17, 2011.
Posted by Curtis Faville at 7:09 AM

You should have made 10 more of these to sell to fine arts collectors for 20,000 dollars. They look lovely!

I agree with Kirby.

I can't afford the "Eigner Collected" but am awaiting the "Selected Eigner".

There IS a LE selected poems

edited by Sam Charters and Andrea Wyatt
oyez berkeley, 1972
I got a "like new" copy of it

also got the Stanford "Collected Poems ..."

Andrea now lives a few blocks away from me... seems to be active /reading at / in Takoma Park

Andrea was the very first REAL poet to exchange books with me... about 1970.

As you may also know, Andrea wrote the first Bibliography of Larry Eigner. I had a devil of a time getting in touch with her, since she had relocated to the East Coast in the intervening years, and had sort of gone underground. Eventually, we did hook up briefly.

Sam Charters edited the first Eigner Selected for Bob Hawley's Oyez Press. I still occasionally see Bob (a cancer survivor) with his wife and the El Cerrito Re-cycle center where we both dumpster dive for books. Do I dare admit in print that I do such things?

Sam's wife Ann is emeritus from a college--I think Connecticut--where she taught English for years. I was never able to reach Sam. Is he still alive?

I almost went over to the last one to see / hear what of she was writing...

however, i didn't want to break my 70 -year run of never going to poetry readings.... not even when i am reading.

as far as I know she has always lived around here

is always in the presence of what she is (immediately) doing.

Shit! Every day I check the Washington Post's obits to see if
I'm still here!

enough about them/you
let's talk about me