Morley Baer and the Shrug of Earth

Morley Baer [1916-1995] was a Bay Area resident and professional photographer for fifty years. I first became aware of his work in the early 1980's. His black and white landscape photographs were being published in monographs, and he had achieved notoriety for his color work in Painted Ladies--San Francisco's Resplendent Victorians [Dutton, 1978], which recorded the garishly repainted late Victorian--post-earthquake--architectural follies, in vivid Kodachrome (or Ektachrome). Baer had begun his professional career as an architectural photographer in the late 1940's. Like Brett Weston, he'd done a turn in the military working as a service documentarian, before finally settling in the Bay area in the early 1950's. Baer eventually established a reputation as one of the top architectural photographers, working with William Wurster, William Turnbull and many other notable regional designers. His images of the built environment are widely published in that field. 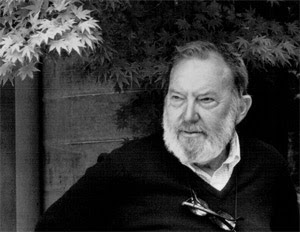 Concurrently with his architectural work, Baer was also interested in landscape imagery. He early connected with Edward Weston, and fell in love with the same West Coast scenery which had inspired the Westons (Brett, Edward and Cole) , and many others during the immediate post-War period. Baer assisted in the printing of the limited original Edward Weston print portfolios. As his interest in artistic landscape work increased, he was drawn to the Central Coast area around Carmel, and in 1965 he moved into a beautiful stone beach mansion on Garrapata Beach--designed for him by Wurster. Baer, using the beach house as a base of operations, lived there until 1979, when he sold it to resume living with his wife at another house in the Carmel Valley, where they lived for the rest of their lives. In his later years, Baer taught workshops, and saw his reputation grow along with the recognition of the West Coast photography movement of which he had been a major figure. 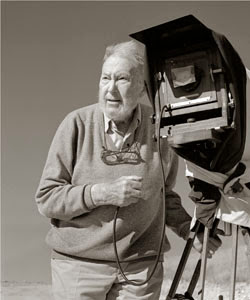 Preferring an 8x10 view camera for most of his serious work, Baer established a personal style that derived in part from Edward Weston's and Ansel Adams's landscape work, but he brought to it a certain elegance and finish that set it apart. Aside from his straight architectural commissions, Baer was interested in the architecture of barns, the rolling oaky hills, and spent time in Spain and Italy working on classical subject matter as well. I've always loved his studies of the coastal foothills, which though not being entirely "heroic" (in the manner of Adams) nevertheless have a dignity and austere picturesque quality I find very attractive. 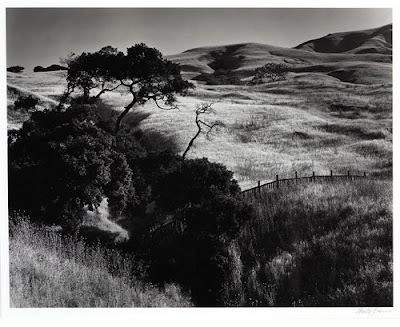 He also worked in the Southwest, exploring the native pueblo and church architecture, seen here in this gaunt, metaphysical study of an adobe wall and curved ladder arching into an eerily empty sky. 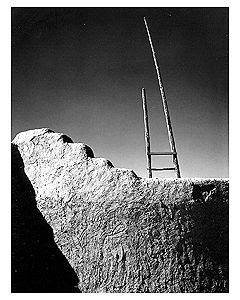 The same kind of aesthetically discrete approach characterizes this study of a Spanish colonial architectural detail of a chimney, door and roof-line. Keeping the roof-line level with the point-of-view allows the composition to be neatly divided between the shadowed wall underneath the overhang, and the slightly darker grey sky above. 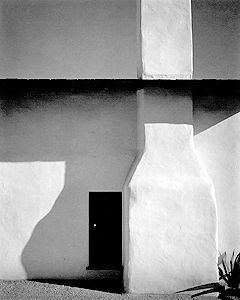 There's a sculptural purity about this study of another Southwest structure, the high contrast hard sunlight emphasizing the heavy solidity and mass of the battered stone construction. 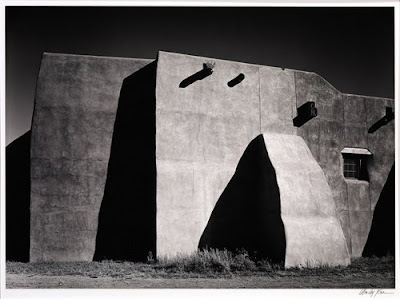 One aspect of the dramatic West Coastline is the foam and spray which rise into the atmosphere around the crashing surf and rocky shingle. Baer captures this coastal "fog" or mist interposed against the distance shoulders of land, heightening the effect of the glittering droplets of sparkle and fizz. You can really feel the wet and coolness of the interaction. 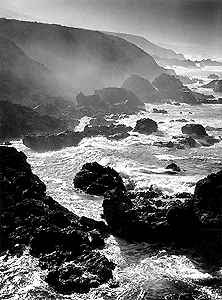 The effect here--of opposing surf waves--possible where a fresh-water stream meets the oncoming waves, creates a christening quality, where the two currents will intersect and merge into one. It's a delicacy for the eye, like sunny lace curtains in the breeze. The rock, meanwhile, anchors the composition. We're looking at a diagonal vantage to the scene, so that rock sets up a perspective definition that keeps the eye level and oriented. 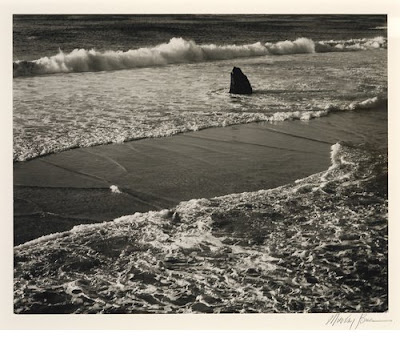 In the course of his architectural work, Baer often ventured into the agricultural valleys and canyons of the coastal mountains. Here he captures a well-known adobe ranch spread, with characteristic preciosity, the whitness of the buildings and drive contrasted against the dark shapes of the mountain ridge. 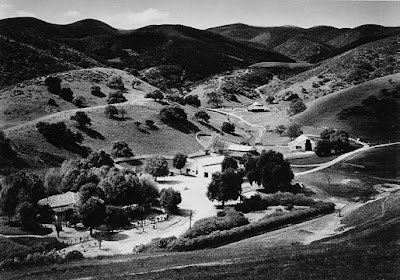 It's clear that Baer felt a sense of earthly power in the California landscape. Many of his studies have a strong, masculine apprehension of forces implacably set in opposition to man's appropriation, the movement of great forces under the earth, or from the sky, which contend in a scene at once majestic, and somewhat frightening. We stand in awe of the earth's (or nature's) capriciousness, though its movements and adjustments may be as quiet and satisfying as the slow movement in a Bruckner symphony. 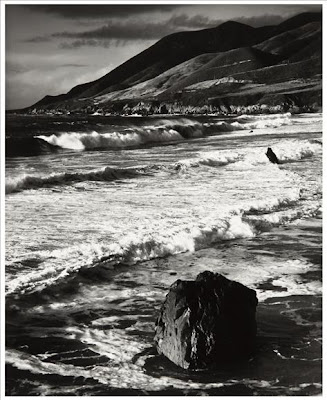 Bringing out these senses of scale and awesome range is often what Baer's prints seem to be about. This is achieved through the contrast between a delicately rendered (and perfectly clear) foreground, and a yawning background fortuitously back-lit or highlighted with cloud windows. 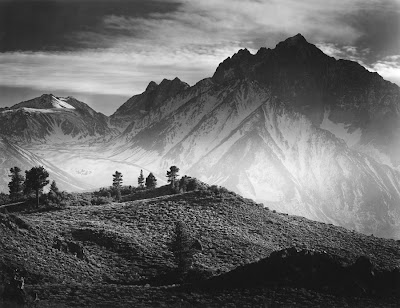 This study of rock and water is not an unusual subject--indeed, most of Baer's images aren't about finding the most peculiar or strained vantage from which to view a landscape scene--but its quality is like a brunt or shrug of geologic gesture. The rock flows, while the water seems icy, and still. The interposition of states of matter uses the deceptive contrast between kinds of textures to disorient the eye, and give interest. As with all Baer prints, there's a strong "interlocked" composition, founded and fixed. 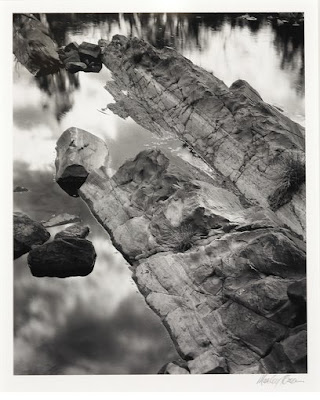 Though most of Baer's work in architecture is straightforward, occasionally he liked to make images of odd dilapidation or decay. The disappearing rural architecture of the West captured his imagination. This storehouse structure has a weird "high-rise" effect which is completely disorienting in the context of its placement and construction. Baer was fond of dark skies, and this one undoubtedly was burned in deliberately to emphasize the heavy, overbearing quality of the ghostly presence.

Baer's work along Garrapata, Big Sur, Carmel, and the Monterey Bay region may be the best examples of this genre. The combination of high contrast blacks with feathery light grey distances, is always used to create drama, and mystery. 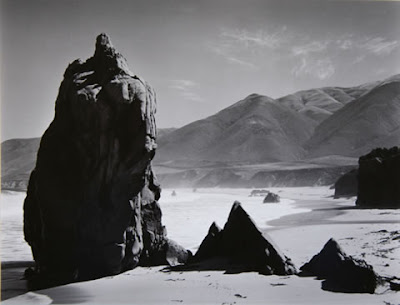 These compositions may seem easy and available, but it takes great patience, lots of work in the darkroom, and some luck as well, to make pictures like this. The light and clouds and wind seldom cooperate. Once, photographing along the Garrapata Creek area, I picked up a terrific case of poison oak that plagued me for a month. I'm sure that Baer must have known about this, and taken steps to protect himself. In my case, just handling the spikes at the end of my tripod was enough to infect me from head to toe! 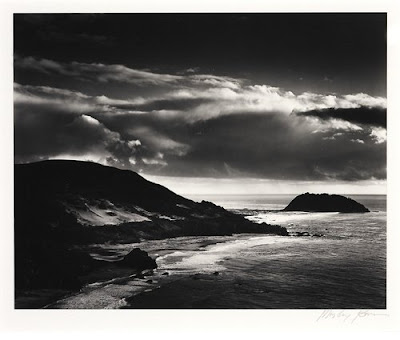 These aren't the usual tourist shots--because the "nature" they portray isn't welcoming and cheerful. They seem to be telling us that this country may be over-run, may be spoiled and defaced and polluted and poisoned, but it will never be tamed. That's the message with a lot of Baer shots: There's an ephemeral fragility which we can see here, but underneath that there are forces and movements which command our respect, as well as our appreciation of their inherent beauty and charm. 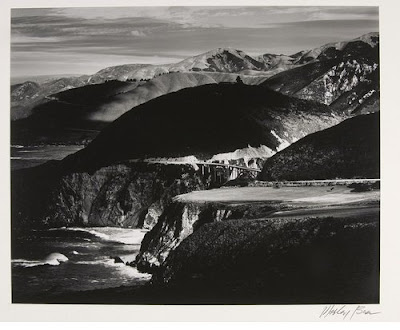 Baer's images are contemplative and refined, serious and dry. But despite their classical balance and studied counterpoint, they're hardly reassuring or inert. The dizzying forces and poised relationships they capture are held in place by the shrewd augmentations of his art. You can feel Baer's character in all his images--he manages to define his purpose and convey his program with confidence and fullness of intention. 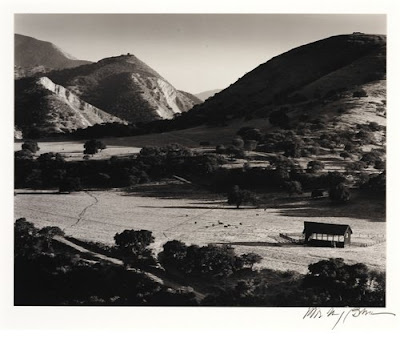 This power of purpose has metaphysical persuasiveness which I find convincing, though this isn't the only kind of photographic style I admire, or enjoy. 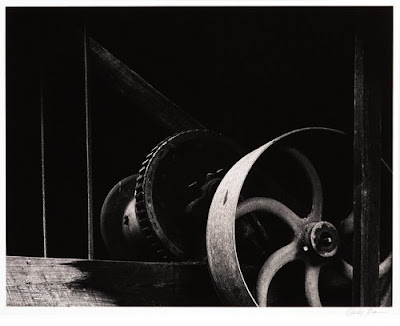 Baer's a "heavy" artist--rather in the manner that Ansel Adams often is. This muscular insistence can be very powerful, visually, like listening to Beethoven. No one likes Beethoven all the time, but we'd be poorer if we'd never known it. Baer's influence is apparent throughout the following two generations of print-makers. We all have our favorites, but there's no question that Baer's approach to landscape has tended to dominate the field. In many ways, he's the fulfillment of the movement which began with the f64 Group in the 1930's, and chronologically he stands in direct descent from that time, to this. 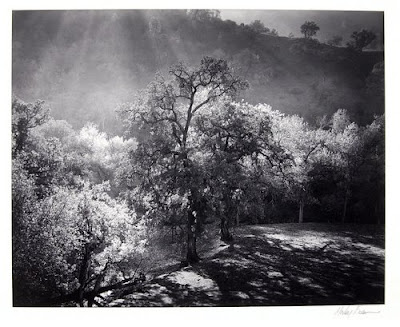 Much of the landscape he's explored no longer exists, and his work thus occupies an elegiac position with respect to the progress of western expansionism and development. The post-cards of yesteryear become the nostalgic flashbacks of the future. 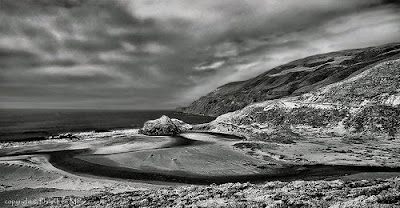 As we use up the remaining unspoiled lands which men first discovered centuries ago, it's important to have records of what was lost in the process, even if the ultimate message is a sad one. This is what you had, and this is what you lost. Shame on you for ruining it. Even if your busy manipulations and "improvements" will someday be swept away by some conflagration or inundation of nature. 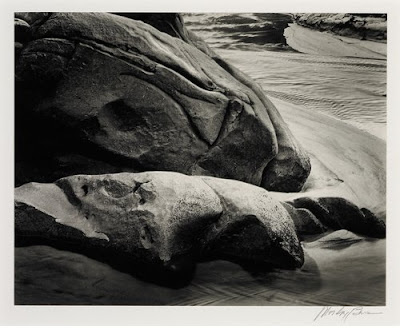 Posted by Curtis Faville at 7:49 PM

The Round Valley pic's cool--Mt Tom ah believe. A bit..moodier than A. Adam's style. Seashores--well done, but eh.

Thank you for sharing these wonderful, dare I say, exquisite, photos! So beautiful.

Thank you to the Morley Baer Photography Trust for having given permission to show and share these wonderful images.