Some Speculations about Post-Secondary Education

Public post-secondary education has been much in the news lately in California. Budget shortfalls at the state level have been pinching the allocations to state university and state college systems, causing steep rises in tuition and fees to students, and cut-backs in maintenance and faculty salaries.
Over the last several decades, both the university and state systems have been rapidly expanding, to accommodate growing numbers of applicants. Private institutional tuition has been moving up rapidly too. 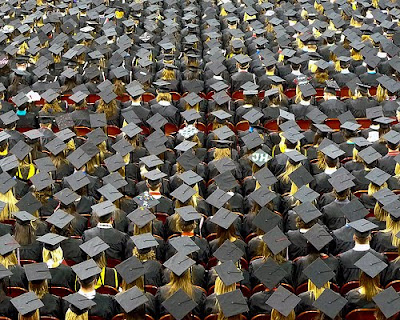 the grocery store up the street used to have 12 check-out lines with 12 REAL PEOPLE as cashiers.

now ? 9 NINE! of those "cashiers" are a computer scanner ... and the REAL cashiers are now lower paid PART TIME people.

so much for our Higher Technology jobs, eh?

as for th auto industry ... now you have to have an advanced degree in pushing the "start the computer" button to get a job ?

A frien'ds son just got his first computer based job after getting his Computer Science Degree ,,, designing
web-sites or some such useless crap for the local newspaper !

he should have gone to plumbing school !

The apparatchiks took over sometime in the 60s--there are good professors--allegedly , but a racket nonetheless. Extension classes at UCLA were like 100--200 bucks, just a couple of years ago. Now 5-600. Not to say the conservative, private unis..like Swineford--are better. 12 grand at Cal?...about 50 grand at SU or USC. Life in the Feinslimeocracy.

if you put drugs in the water systems encourage people to phuq a lot and feed them bad food keep the tv(S) going everybody needs an ipad...we'll get it right

ahmurikhun culture holds to the idea (:)

I guess the speculation of my post, simply put, is that post-secondary education may not be a privilege, in the same way that grammar and high school surely are.

The second speculation is that the common assertion and belief that we can "educate" our way out of the employment crisis is nonsense. Where's the proof? America's post-warprosperity wasn't built on education; it was built on the factory system, and the expansion of social programs and gains made through unionization.

Conservative interests have been trying to beat back those gains for half a century, with increasing success. Perry wants to eliminate Social Security, the greatest and most successful social program in history.

If college is a form of social engineering, then it's gotten away from its purpose. In England, where class certainly dominates the educational hierarchy, rich kids always have the best educations. But please note, until the middle of the last century, that paradigm was based on classical literature, not utilitarian subject-matter. Is there a lesson there? I'm not sure.

A well-educated society isn't necessarily a prosperous one. Here in America, consumption is routinely used as a yardstick to measure prosperity. But a well-educated majority might not buy into that concept. A prosperous society might not be a well-educated one. The GDP of China is steadily rising, but because it's so vast and populous, poverty still dominates. Was it education that propelled the Chinese? Hardly.

Up until Reagan got elected I owned my education free and clear. I didn't make much progress in school because I tended to go part-time, often just one class per quarter while driving taxi on the night shift. I took short story classes from three or four different instructors, did quite well in an expository writing class, and particularly enjoyed a James Joyce reading group I could take for credit. I found both work and school quite tolerable as long as I could maintain a balance between them. I saw no problem with sitting out for a quarter or two or even a whole school year so I could earn enough to pay for my next class.

When Reagan was elected tuition was jacked up and the restrictions on financial aid were brought down so basically everybody was eligible. But once you received financial aid you were part of a system. Part-time school wasn't an option. Your only choice was full-time and you had to progress toward a degree. You couldn't just take classes because you liked taking classes. And the student loan system was set up so that the bank became majority shareholder in your education and the purpose of your education was to have something you could sell to industry. I had no problem with that. I spent lots of time at the placement center. The problem was that industry considered English Literature not just trivial but frivolous. Interviewers were unanimous. They only wanted to talk with people getting degrees in Business or Computer Science. English had no value unless it was directed toward a degree in Education, which was glutted at the time with students who wanted to become teachers. I had no desire to become a teacher, though I would happily have done so for a few years as a means to get by. I would have been an excellent teacher. All of my aunts and uncles for two generations were teachers, but I wasn't willing to put up with what was being taught in the School of Education. A teaching certificate in English only required three courses in period lit, which was used to weed out the bad apples. I had sixty hours of period lit on my transcript when I graduated. The only Education course I survived was in Women's Lit. It had a reading list and the exams were all essay. Education courses were just like Business courses. Multiple choice. Apparently you were supposed to buy the correct answers.

the insufficiencies of pragmatism

Not sure I agree with you on that, padre jh. Modern education does tend to be efficiency-minded--a premium in placed on James' "cash value of truth". Yet I do not think its Dewey's fault at least. Dewey was a progressive, and anti-capitalist. Humanist, but not quite marxist--and valued a certain holistic approach to education. UC-Co seems quite non-Dewey like. Don't know what the proper term is--bureaucratic techno-capitalism or something.

For that matter, the catholic private schools are hardly an improvement. Like USC--catholic,at least initially I think. That's just pure capitalism-- now Chi-chi capitalism. Catholicism has gone by the wayside. Loyola---well, it's still sort of catholic--and expensive too. Like ...lesbian and g*yboy catholic! An LA tradition of sorts.

Thank you for sharing such great information. can you help me in finding out more detail on  schools in pune