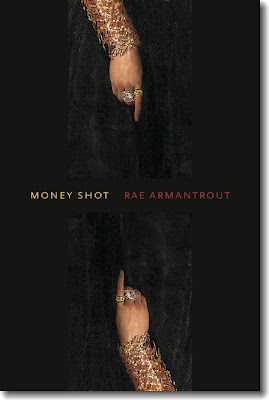 [Money Shot. Rae Armantrout. Middletown, Connecticut: Wesleyan University Press, 2011.]
In the world of pornography, "money shot" refers to the crucial moment when a male actor ejaculates, either on or inside the partner, usually at the conclusion of a session of oral copulation. The origin of the term appears to have come from film-making, either in reference to the expense of setting up, or the anticipated value ($$$) of, a specific scene, or even the premium pay due the male actors who do it.
Variance among "hard"- and "soft"-core kinds of representation may denote degrees of verisimilitude or taste. In any case, the term (or phrase) has entered the language, and is now routinely heard in other contexts in which any important event or situation may be defined through its emphatic use.
From a critical point of view, the act (and the term) may be said to express a misogynistic attitude towards women, for whom the submission to degradation and/or belittlement constitutes a depersonalization, a submission to male power, or eroticized male hatred. The flip-side of that take is that the oral-genital sublimation may symbolize the passive submission of the male, or that the fetishization of semen as the pay-off of the sexual bargain signifies the growing irrelevance of men in reproductive contract.
In Armantrout's poems, the term appears to have been conceived as a metaphorical handle to define the contemporary climate of exploitation and greed which have characterized our attitudes about the purpose and function of work, material acquisition, and social status. It may have powerful negative connotations, but in a broader sense, it serves a poetic function as a generative inspiration for the elaboration of themes of suspicion, irony, indignation, revelation and grace--all the range of feelings one might have about the infection and proliferation of betrayal, menace and manipulation as experienced in the arena of public media and intercourse (or language). In other words, language is both the measure and the playground of this discourse. 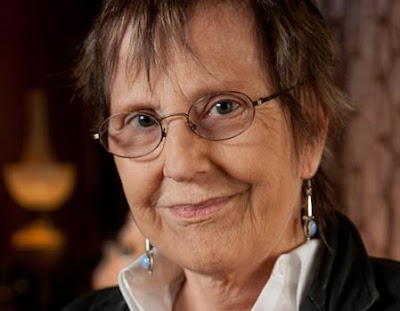 clever or "intriguing" as they say, but essentially another UC apparatchik getting her narcissism on--like Sir Fagville.

The real question (however ....Mericun it might sound) is...should CA taxpayers be required to fund "creative writing" such as this?? We say ..nyet. . Of course people can and will write whatever they want to...but the state should not be expected to foot the bill for programs and "teachers" (and that holds for most...Ahhts funding--though IMHO there's quite a difference between say ..the expert musician who plays...chopin and scriabin perfectly, and poets--fund the chopinista...the poetaster--no, unless perhaps a Pound-like genius--)

Gee, thanks, Vish--"Sir Fagville." How did I acquire this trite moniker?

I'm inclined to agree with the bit about taxpayer-underwritten art. As you would know, if you'd read my piece about it here--

--not because government doesn't occasionally get it right, but because in aesthetics there can't be any "democratic" welfare. Who's to decide on the value of anyone's art?

That's another amusing (or sickening) aspect of anti-statist rants of conservative "writers" such as Kirby Olson and his cronies (Olson a college teacher of some type)--when engaging in the teabagger rant--"end-handouts for teachers/professors", etc--aren't they in effect saying..."We should be fired, since we are part of the corrupt State"? Like Robespierre, or..dyslexic Robespierre at least--who legend holds, pulled the robe on his own guillotine-ing


That said, I have reconsidered---IM not opposed to funding Mss Armantrouts, really. I'm opposed to one solitary genius (or putative genius) getting the sinecure, and hundreds, or thousands of others who are starving poets/artists for years (or life). So, stipends for all! (at least somewhat legitimate ahhtistes, degrees,so forth). Tax the Kochs and google execs ,etc to pay for it..

that is..."and hundreds, or thousands of others who are starving poets/artists for years (or life) do without."