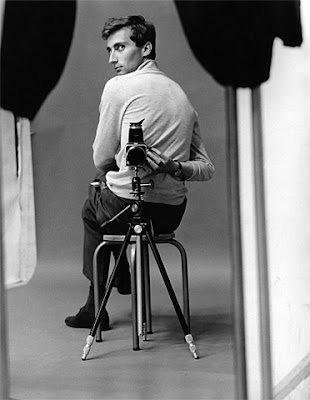 JeanLoup Sieff
Jeanloup Sieff [1933-2000] was a Polish-French-American photographer concentrating on fashion. Like others in the field (Irving Penn or Richard Avedon), his creative drive could not be confined simply to taking pictures of women in outfits, and he developed a portfolio devoted equally to fashion, and to other kinds of subject matter (landscape, candid photojournalism, celebrity, abstraction etc.). In Sieff's case, though, the fashion seemed to inspire him to conceive of situations or settings which challenged the stiff, stereotypical tradition of fashion photography, and he became a leader in the trend towards naturalistic backdrops, location shooting, and weird, disorienting contexts. 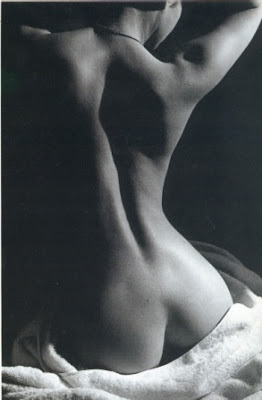 What are the implications of our growing relaxation of inhibitions and moral standards over the last 200 years? I've written before about the implications of nudity, in my post The Lolita-Complex in the Work of Jock Sturges. In a pre-historic, pre-"civilized" state, humankind must have gone through a very long period during which nudity, or semi-nudity, was our natural condition. As our human ancestors developed genetically, gradually losing body hair, the choice to wrap the body in a covering material would probably have begun as a way to retain heat. As our brains became more sophisticated, the tendency to regard the physical aspects of sexual difference would eventually have led to primitive ideas of self-consciousness, embarrassment, and symbolic objectification. 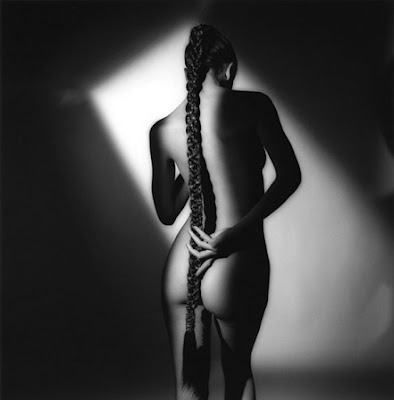 In primitive societies, the idealization of the feminine principle vied with that of the male as expressions of power or control. In Christian iconography, there is the feminine principle of the idealized virgin as the ultimate vehicle for divine transmission. With the development of the fashion system in 20th Century media, conceptions of the idealized feminine principle were diverted into a denial of fertility--after WWII, the proto-typical body type would become thinner and thinner, until in our time anorexic stick-figures dominate the runways of the great cities of fashion (New York, Paris, Milan). 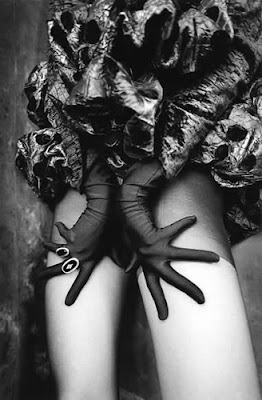 Sieff, of course, functioned within that system for decades, and became a leader in the evolving interpretation of the ideal feminine look, utilizing the mannikin waif to augment a vision of women as trophies of chic--impotent, dependent and starved. 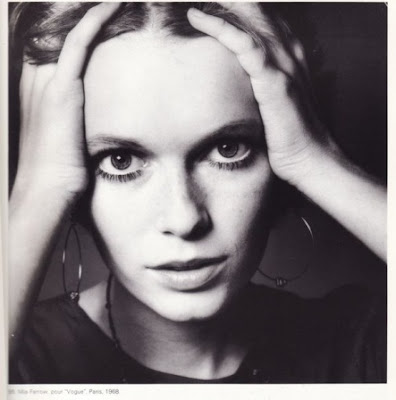 Mia Farrow
Like Ralph Gibson, though, about whom I wrote on October 3rd, Sieff's interest in the nude was not restricted to the acceptable settings of the advertising/fashion sphere. He saw them as related to the natural world, in the context of landscape (wild). 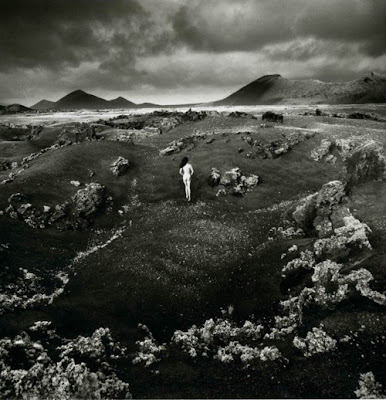 In his monographs, he integrated images of fashion out-takes and female studies with stark, desiccated or lonely (isolated) landscapes, or put models directly into them. The resulting surreal disorientation emphasized the improbable nature of the fashion system itself. Rather than putting models into cocktail party scenes or under bridges along the Seine, he took the location shoot to its logical extreme, emphasizing its implausibility by paring it down to its essence. 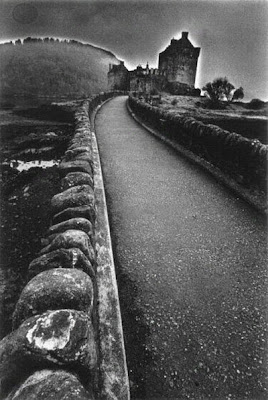 In Sieff's nude/landscape studies, he isolates the sexual feminine in a pitiless, barren context, in which the merely decorative aspect of the model's attire, of her trim, decorative body-type, is rendered absurd. 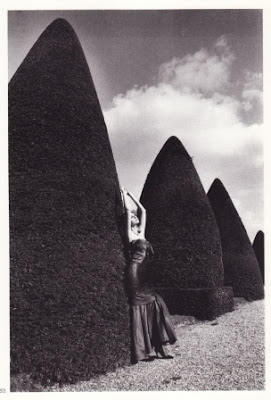 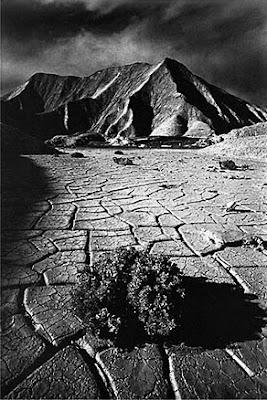 The suave, emptied-out urban moment--deserted but for a single, hurrying, anonymous figure--seen from an otherwise unremarkable café vantage, combines the alienated (but liberating) condition of the modern city, with the vicarious, vacant deadpan--a setting for anything, the viewer's identity a receptive emptiness. 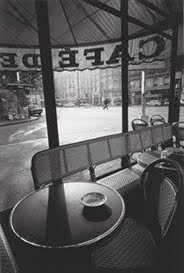 In Sieff's landscapes, the overbearing thematic pathway through desolation towards a mysterious destination implies an existential despair--like walking on the moon. 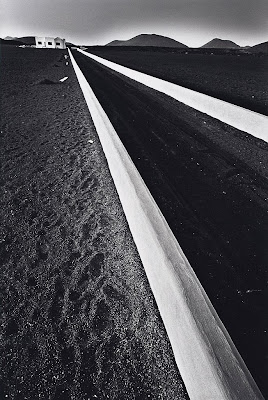 Images such as these aren't about formal structure as much as they are metaphorical narratives navigated through a pristine, washed-out dystopian fantasy-land. The world presents as a stark series of priorities or limited options. 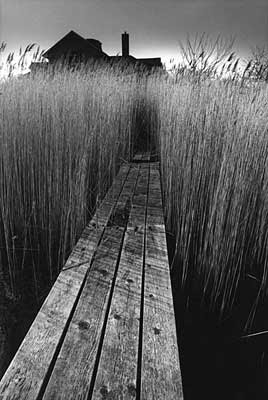 Primitivistic license poised over vicarious permission. Does modern luxury and facility trump mere instinct? Or are our root tendencies more powerful than conditioning? The two models below are held in perfect tension, unresolved diagonals bizarrely conflated, the meubles of commodity stretched thin. 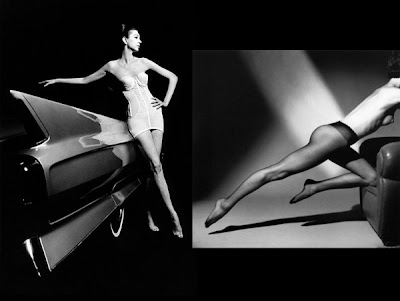 When Sieff photographed celebrities, some unforeseen revelation always seemed close-at-hand. No doubt Yves Saint Laurent was delighted to have his physical body memorialized by the master of the torso (Derrieres, Torses Nus), emphasized with a back-lit halo. Since fashion's ulterior subtext has always been sex, and/or the modal enhancement of the torso, the purest form of of the ideal would be nudity itself. The Saint Laurent portrait makes that point. 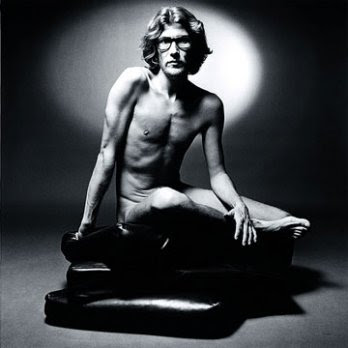 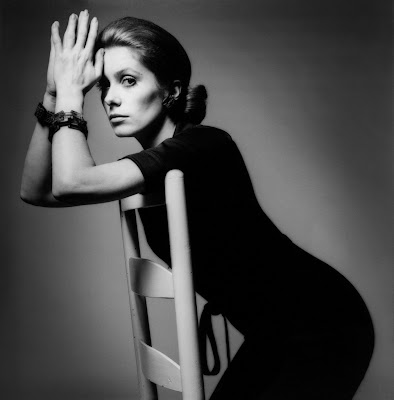 Catherine Deneuve
When we photograph ourselves, we're defining our identity through a range of possible versions. Fashion is about the extremes of idealized desirability, but in the modern age, actual sexual content has been methodically removed from the object, leaving the frustrated alembic of impotence. Hence fashion and pornography remain discrete precincts with little or no cross-fertilization. 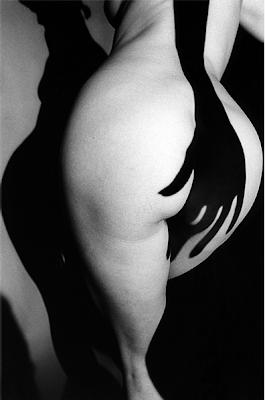 In Gibson's work, sexual imagery passes over from desire into obsession, and from obsession into abstraction. In Sieff's work, the inert mannikin writhes in distracted discomfort or remote (re-)pose, unable to escape into a metaphorical paradise of pure joy or fertile interaction.
What makes the shot below effective isn't the model's vulnerability, in a fantasy of predatory monsters--which, in a way, she is, in the modern world of capital extraction and mass manipulation. Dinosaurs and people never shared the planet, the reptile era having passed into extinction long before we evolved from the apes. The Age of Dinosaurs suggests a carnivorous free-for-all in which larger and larger animals consumed more and more exigent flesh, an epoch of blood-lust. The truncated conflation of the refinement of fashionable decoration, with the violent potential of untamed carnality (and greed), only emphasizes the anal barrenness of the Puritan conscience, spinning viscid smut out of the bowels of frustration and pent-up sensuality. 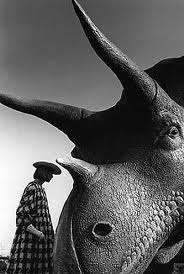 Posted by Curtis Faville at 7:15 PM