The picture below was taken this afternoon across the street from my office on 4th Street in Berkeley. Can you copyright a building facade? Probably. Before this lettering pattern appeared, I would have ventured to observe that the building itself was vacant. Behind the ranks of uniform glass panes is a lot of two- or three-story high permanent heavy hydraulic equipment--thick gauge pipe, valves etc. God knows what went on in there in its heyday. Buildings like these in the last couple of dozen years in the Bay Area have been appropriated for low-tech small businesses or converted/subdivided office-spaces. Lots of artists have studios or work-spaces in them. I have no idea who's occupying this place now, but there's no evidence of human activity from the outside. Perhaps someone simply got permission to perform this appliqué as a project. . . ? 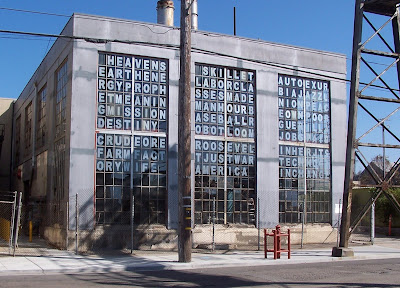 Clicking on the picture will render a much larger image, enabling you to read the words formed by the letters in the panes. The "message" is as follows:
HEAVENS
EARTH
ENERGY
PROPHET
MEANING
MISSION
DESTINY
CRUDE
ORE
FARM
FACTORY
WIFE
SKILLET
LABOR
CLASSES
MADE
MAN
HOUR
BASEBALL
ROBOT
LOOM
ROOSEVELT
JUST
WAR
AMERICA
AUTO
EXURBIA
JAZZ
UNION
PEACE
OWN
POOR
GUERILLA
JOBS
PAID
INHERITS
TECHNO
GAIN
CHANGE
I haven't tried very hard to decipher this, but it's possible there are some acrostic messages here. Maybe it's a coded transmission lurking behind the quotidian word-list? Or maybe it's just a light-hearted art project to make passers-by ponder for a moment. If so, there isn't much that I'm able to make out of it that would cause me to spend much effort meditating it.
Anyway, pay attention when you walk the streets. There are always surprises. Especially in a place like Berkeley. An open mind, and an open eye can get you into trouble, but also might open up doors. Who knows what awaits you around the corner?
_________________
Addendum [12/2/11]. Clarification of last four words of the window display. INHERITS/TECHNOGA/INCHANGE, or INHERITS TECH/NO GAIN CHANGE. I inquired with a tenant in the building who told me the landlord had authorized someone to make this installation, but knew no more about it. -CF
Posted by Curtis Faville at 8:45 PM

Everyone's welcome, here, even the skinheads!

There is a third pane whose writing I cannot make out very well. What does it say? Has this piece stayed up? Or has anything happened to the building to create a greater sense as to what is going on.

Right. I forgot to transcribe the right hand side.

I've revised the blog to reflect the letters in the right hand window-bank--at least as they can be seen in the photo.

There's definitely a mystery about those two panes after TECHNO.

Wouldn't Larry Eigner have loved this?