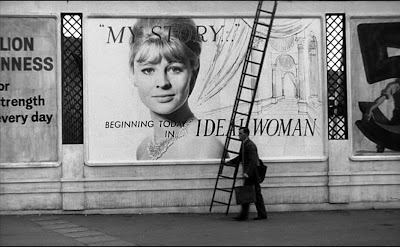 Darling [Joseph Janni/Vic, UK, 1965] is a classic British New Wave movie which I saw when it was first released in the U.S. Directed by John Schlesinger [A Kind of Loving (1962), Billy Liar (1963), Far From the Madding Crowd (1967), Midnight Cowboy (1969), Sunday Bloody Sunday (1971), Marathon Man (1976)], it's among a handful of gritty--some might even say grungy--post-War films which document, criticize and celebrate the breakdown of British class tradition, and bring a hard edge to the sentimentalized relationships which had dominated English films since the 1930's.
Looking at the film now, it seems as much about the suasions and trends of the 1960's, as it is a portrayal of the disintegrating social structures it addresses. Its spirit of negligent disrespect, its crassly cynical attitude towards the commerce of getting-on in the world, gives it a brittle shell of cocky disdain which is part of the reason it still resonates in our time, as, in the present-day, America settles uncomfortably into a parallel decadence and economic decline. 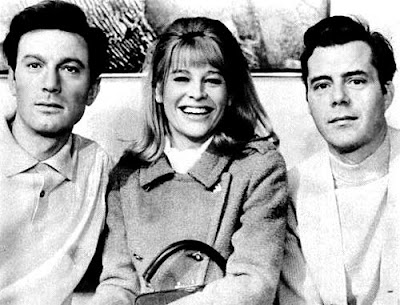 Darling, in my mind, is associated with a handful of other films of the same time--Losey's The Servant [1963], Clayton's Room at the Top [1959], Richardson's The Loneliness of the Long Distance Runner [1962], Schlesinger's own Billy Liar [1963] and A Kind of Loving [1962]--it's like all these other films in having been done in coal-and-chalk black and white, in showing the raw, verité surfaces of British urban life, and in the way it mocks and mourns the cravings and miseries of ordinary people trying to find salvation in prosperity, or an escape from the compromises and temptations of a hollow respectability--but it has its own kind of bizarre, far-out attractions, which anticipate the daring innovations of the 70's and beyond in both British, and American movie-making. It announces a new world of values which will become the commonplace of the boom years to come.
It features three English actors whose careers were still on the rise in those years: Julie Christie, the vivacious, sexy blonde sprite with the sensual lips and knock-out body; 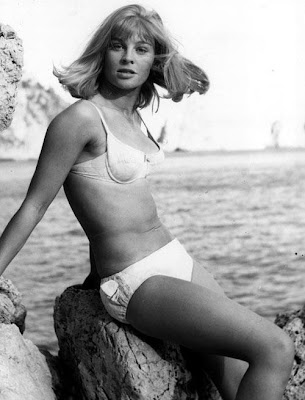 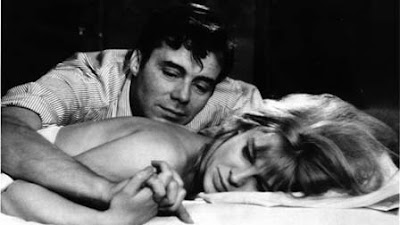 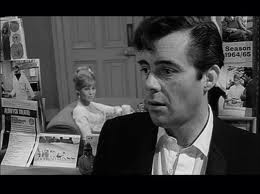 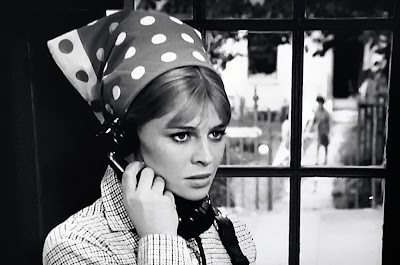 Scott pursues "culture" with Robert, but then jumps into a new relationship with Miles Brand, an advertising executive and a veritable reptile of a creature, who exploits and copulates with equal contempt, drawing Scott into an immoral world of philistine venality, and illicit play, effectively destroying her relationship with Gold (Bogarde). 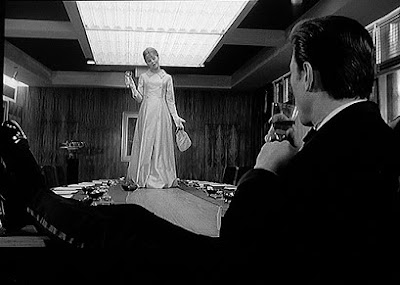 Diana (Christie) and Miles (Harvey) in the overture to sex 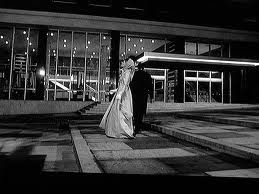 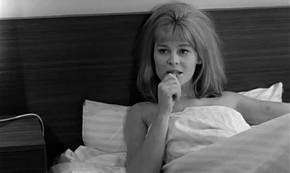 Finally, during an escapist holiday in Italy with Gay fashion photographer Malcolm (brilliantly played by Roland Curram), on a location shoot for a candy commercial, Scott runs into none other than a genuine Italian prince, Prince Cesare della Romita,* who proceeds to propose to her almost immediately. Scott, dreaming of Roman Holiday and Grace Kelly (no doubt), imagines herself in paradise, but when she finally does hook up with him, he turns out to have been looking for a trophy wife, and spends his weekends in Rome with his mistress, leaving her to look over his passel of kids and an army of servants, lonely and bored. Old world charm looks suddenly empty and decayed, and she despairs once more. Hopping to London incognito (she's by now a celebrity principessa) for one last fling in the sack with Robert (Gold), we leave her finally returning to Italy, and the dreary existence fate has fashioned for her. 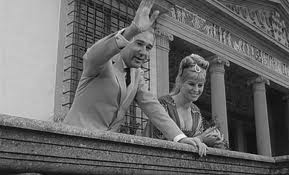 We feel a mixture of sympathy and contempt for almost everyone in the film, because none seems immune from the opportunistic impulsiveness which leads them astray. Only the Prince, perfectly at ease, appears to conduct the sort of life he prefers. Diana (Christie) is used by everyone, but she in turn uses them. There's more than enough betrayal to go around here, and as it begins to pile up, we get to be feeling there are no other choices in life for these people.
In one particularly weird sequence, Miles drags Diana off to a shag party in Paris, populated by seducers and transvestites, who engage in a sort of conga-line strip-tease game of truth or consequences--clearly one of the more demoralizing scenes in all of cinema. Frederic Raphael, who wrote the screenplay (as well as Far from the Madding Crowd [1967], and the mini-series The Glittering Prizes (based on his own novels)), injects about as much cynical carnality into the story as possible. Harvey, who had already established his aspic-cool persona of ruthless social climber in Room at the Top [1959], seemed inseparable from his character here. Bogarde had already worked in a host of British productions, achieving matinee status with several romantic parts, as well as a handful of skilled character roles. He won a BAFTA as Best British Actor for The Servant in 1964, so he seemed perfect for the slick, slightly arrogant but idealistic Robert Gold. Seeing him fall into love with Diana, we're conflicted about whether to admire him for his sexual good taste, or condemn him for infidelity. Diana is so transparently cheap and selfish, Gold (Bogarde) must deserve his distress at losing her. The mutual scorn with which all the characters eventually appear to regard each other is the very currency of exchange in a world scuttled by capital and ugly indulgence. Diana is indeed the Honeyglow Girl, a lower-class wench who waddles and skips into the the European jet-set and ends up the miserable kept wife of a slick womanizer who only values her for her trivial good looks. Some have seen Christie's role here as a reprise of Room at the Top (from the female point of view).
The film score, by John Dankworth, who did the music for the British TV series The Avengers, as well as for Saturday Night and Sunday Morning and The Servant, is sheer genius. Dankworth's arch amalgam of bleached-out pop advertising jingles, breezy sleezy jazz riffs, and coy ironic segues, is the perfect undercurrent for the film's thematic tropes.
The film's frame--its conceptual technique--is the interview/biography, presented as the "princess" describing her ascent to royal entitlement. Incorporating a newsreel-like tone, Diana's self-aggrandizing, excuse-making manner, her unconscious humor are counterpart to the corrupting world she passes through. In the opening credits, her enormous image is projected onto a billboard as the "Ideal woman"--as the credits roll. This media-exposé metaphor is picked up later as Robert's BBC television man-on-the-street interviews and studio tapings, and then as paparrazzi pursue "princess" Diana through airports. Diana is undoubtedly a tart--a "little whore" as Robert calls her--but in some sense she's better than the vile Miles. In a famous bit of dialogue she has with Miles during the seduction scene in his empty boardroom with the long table, she offers--
Diana: "Suppose it took three . . . "
Miles: "What do you mean?"
Diana: "You know, to make a baby . . . "
Miles: "Charming!"
Raphael seems to be suggesting that none of these three people is a completely whole person, perhaps only a third or a half of one, and to complete themselves, to "make a whole" would necessitate pooling their combined DNA. One is conflicted to separate the chicanery and willingness-to-be-used on the part of these characters, from the perverse contexts within which they live. Their best moments come when they're attacking each other, exposing their ethical limits indirectly. Each lives out a fantasy arrangement as a kind of holiday from the drudgery of the everyday existence otherwise offered to them. You can hardly blame them for wanting more stimulating lives, but we all have boundaries to what we'll do to realize them.
Despite the hard, bitter surface--and the tendency to conceive of all the characters as stereotypes of delusion and decadence--we do feel disappointment and even pity for them in the end. Each in turn falls into traps through the seduction of temporary fulfillment. It's almost a morality play: Everyone gets his/her just desserts, and the pay-0ff is the dreary ending. These British New Wave dramas seem buried under the coal and mortar dust of post-War reconstruction. No one escapes the grinding drudgery and pathetic mediocrity of moderated expectations, of the consolation of banal dreams and third-rate respectability. Business, art, love, security, loyalty--nothing seems to suit.
What did the English expect after World War II? --that life would prosper, hope bloom, and the general welfare rise? Not bloody likely. Judging by the spirit these overcast, cloudy grey narratives showed, socialism and the Labor years were anything but bright.
_____________________
*Played by a real Spanish marquis, José Luis de Vilallonga (9th Marquis of Castellvell), who also acted in Breakfast at Tiffany's, Behold a Pale Horse, and Juliet of the Spirits, and many lesser films.
Posted by Curtis Faville at 9:21 AM

I fell in love with Julie Christie as Mrs. Miller, the madame opposite Warren Beatty's gambler in the Robert Altman 1971 classic anti-western, McCabe and Mrs. Miller.

What do you know about a French or Swiss-French 60s pop singer named Marie Laforet beyond what's posted on Wiki? The German-American whose Civil War poems I translated had a brother who remained in Germany. The brother's granddaughter married a Wihelm Laforet, who was the leader of one of the few political parties that survived the Nazi era and emerged into post WWII West German prominence.