As From a Great Height - the Madoff Scandal 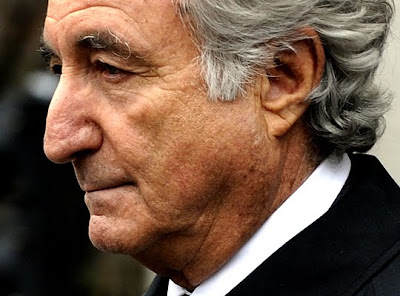 The saga of Bernie Madoff is a familiar one. The only unique thing about it seems to be the enormous scale of the fraud he perpetrated. It's almost a miracle that--given the extent of his dealings, the size of his transactions, and the length of time he had been in business--he wasn't exposed earlier and put out of commission.
Madoff has been sentenced to 150 years in prison, and it seems unlikely that there is any way that this could be shortened enough to permit him to live again outside the walls. White collar crime in America has traditionally been quite leniently dealt with, perhaps in acknowledgment of the high regard we place on the ambition to attain wealth, to "improve one's lot" in the marketplace.
But the market isn't an ethical arena. Anyone who has ever dealt in securities trading knows this. The recent fraudulent activity by brokerage houses, investment banks and accounting firms isn't a new phenomenon; only the scale of it is. Americans have apparently come to believe that investment and speculation can be conducted on "a level playing field," in which cheating and influence and frauds (like Madoff's) can be outlawed; that ordinary people who don't know how the market works, can rely on "experts" and proxies to act faithfully on their behalf. But this has never been true. The trust that people place in advisers and money managers is only repaid by results, and results can be manufactured, as Madoff's grand Ponzi maneuvers have proven, once again.
Is the New York Stock Exchange a "zero sum game" in which there are never any more winners than there are losers; or, to put it another way, is the total wealth at risk in it a kind of balance in which money lost is always, at any given moment, at least as great as money gained, over the long term? It's easy to see how the system can be gamed, especially when those authorized and tasked to watch over the process are not paying attention, or--as has been more common lately--the players are all cheating in full view of each other, and it's in none of their mutual "interests" to divulge.
The American banking system is designed primarily to enrich the biggest players--that is, those whose available capital is great enough that it "entitles" them to have the most influence on the financial system (and the government agencies set up to regulate them). To be sure, there are risks, even to the largest institutions, but the possible rewards for "playing" are great enough to insure that there will always enough "influence" to guarantee that society is "convinced" that the system can't be allowed to collapse entirely; and that those most culpable not be made to account for their transgressions. And the greater the possible pay-offs, the greater the temptation to manipulate the processes by which risk and rewards are settled.
In point of fact, the American economy has never been a "fair" system in which there is equal access to investment opportunities. For every "ordinary" citizen who makes some money through the ownership of "shares" of stocks or mutual funds, there are many more who lose, or whose "gains" are no greater (or less than) the rate of average inflation. Some proportion of those who play will succeed, but that success is not a proof of the reliability of the system or of its fairness. In fact, just the opposite.
But the dangers of a systemic flaw in the investment system are only significant at the highest levels. If a thousand investors get screwed, or even ten thousand, or even a hundred thousand, the damage control is sufficiently cynical to accommodate even this much pain. And for the general population, any suffering at the upper limits is seen as just recompense for the irresponsible risks that were taken. It's easy to hate a rich man, especially if he selfishly played to win. And for those who envy it, it's an ideal they can't resist.
The system works off of confidence--"the full faith and credit"--but the FDIC doesn't insure high risk investments like stocks and derivatives. It protects the bankers from themselves--as we all saw with the bail-out--but not the man on the street. The confidence of the general public is as fragile as the last market crash. No one should ever risk more than they can "afford" to lose on any bet. But with sharks like Madoff hiding behind every turn on the road, it's no wonder that people are squeamish these days. The market is bouncing like a hard rubber ball. Will Greece default? Will Germany and France and England let them?
Posted by Curtis Faville at 6:37 PM

as the dollar is now worth about forty-3 cents....

not much, eh? and then

it s about Fear, Greed and (now) Hoarding/Whore-ding


greece is a Democracy so, their government is doing the right thing by calling for a vote...

Madoffism is right up yr alley

Since I'm not Jewish, the only way I could be offended by this remark is if I chose to be. Considering the source (which is always the point with racist remarks, right?), I'm not much inclined to do so. I mean, if you think racism is stupid (as I do) there isn't much point in engaging people who are (racists).

Also, I don't have the palsy, so I guess that remark is also misdirected.

Madoff is certainly Jewish, but I myself have never delved into finance, or sales promotion, so I think that remark is off-target too.

All in all, you seem to be projecting a whole lot of stuff onto me which belong elsewhere. Maybe it doesn't matter who you're talking to, this stuff just spews out of your consciousness like infernal effluvia. I'd love to have readers, but not your kind.

Curtis, don't you have the option of not publishing such comments? And, therefore, not having to respond?