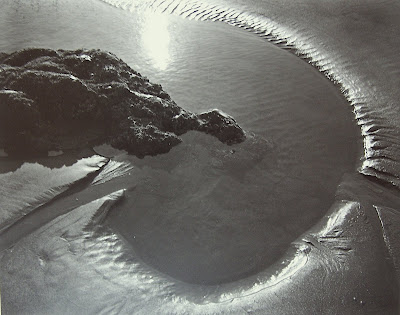 the view of landscape photography as an 'interior framing' sounds very phenomenological (in particular, the descriptive phrase "pre-human, pre-historical, pre-civilized, and pre-conceptual" is very Husserlian). You see the world as a vibrant unity of its realized (but 'manipulated'ultimately)physical properties: light, shade, camer position. Phenomenology tries methodologically to explicate the tension between "phenomenon and human art" in just this way.

I, however, seem to see any photograph not so much as still life as stillborn. To me the photographer's proper task is to give faces of 'death' since s/he deals in life's immovables. I can't help but see in your 'Oregon coast'contact print a kind of embalmer's art. By which I mean the attempt to make viewable not so much what's there as what you've managed to hold down long enough to work on. As French novelist Pierre Mac Orlan writes in a recently published book of his essays on photography (recently cited in Pierre Assouline's blog),

This fictionalizing (romanesque) of an otherwise natural seaside 'phenomenon'amounts to a kind of death (to me).

Of course, philosophically one could deduce the very opposite of what you're proposing.

I.e., that "timeless" moments are not moments stolen from life, but preserved against extinction. Pictures of ephemeral things, like a policeman standing at an intersection waving his arms about, has death and decay and the ephemeral written all over it. An Ansel Adams shot of Yosemite Falls is deathless, though there's no human agency present. What you're saying would make Weegee and Cartier-Bresson and Capa the great image makers of their day, but all the subject-matter they've captured is passing away into oblivion. How is that life-affirming?

Thanks for this! It made me think.

What do you think of the photographic artwork of people like Damien Hirst, Janine Antoni (which I just discovered)?

Is it art or amateur photography?