IHO - The American Bar at The Savoy - a New Painted Lady

The America Bar in the Savoy Hotel in London is among the oldest surviving cocktail establishments in the world. I stayed in the Hotel briefly in the 1990's, but didn't venture into the Bar. Alas, I had other errands to run. It, along with the rest of the hotel, underwent a refurbishment (beginning in 2007) which apparently took years to complete (2010). Much of the original memorabilia and furnishings were sold off. The American Bar itself is supposedly nearly unchanged.
The American Bar was in operation before the turn of the 20th Century, but it became famous during the 1920's when the cocktail craze was at its height. Britain had no Prohibition, so the place remained open right through the bootleg era in America [1920-33]. In 1930, Constable published The Savoy Cocktail Book by Harry Craddock, who was the bartender at The American Bar between 1925 and 1939. The book is a collector's item today, with copies in decent shape rising to above two grand per. With nifty Art Deco designs by Gilbert Rumbold, it sports 750 recipes. It's remained in print ever since, though newer versions aren't as stylishly turned out. Health experts and teetotalers undoubtedly would be scandalized today by its original cover illustration of a lurid green drinker, being jolted by a jagged electric streak piercing his black heart! For those desiring the inebriating thrill of alcohol, such an eye-popping design was considered more than naughty in 1930, but today it's regarded as politically incorrect, instead of just devilish. 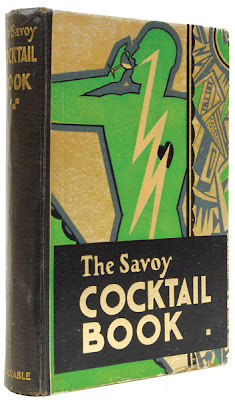 The original Savoy Cocktail Book
Part of the fun of drinking cocktails once involved the atmosphere of the places where they were consumed. A classy speakeasy was a place where people went to have illicit fun. Jazz was played, there was dancing, and certain kinds of illegal goings-on might occur, like prostitution or gambling. After Prohibition was repealed, this shady aura was perpetuated for many years, but eventually the shine wore off, and today, most fancy nightclubs and cocktail lounges don't command the respect or interest they once did, and are really glorified watering-holes for alcoholics. Drinking itself isn't glamorous. It's what people make of their mild inebriation that determines the atmosphere that surrounds it. 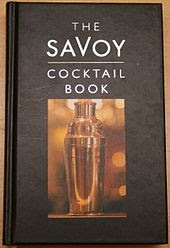 A later incarnation (edition) from 1999
Alcohol doesn't affect everyone in the same way. Some people become ill. Some become morose, or even angry when drunk. But most people just become a little light-headed, or light-hearted, and tend to lose their surface inhibitions. Drinking can even enhance performance by removing anxiety, though the more you take, the more its influence tends to make you less coordinated and mentally alert. But one or two ounces of alcohol generally are not going to hurt you, and unless you're a very small specimen, it won't even make you legally inebriated. 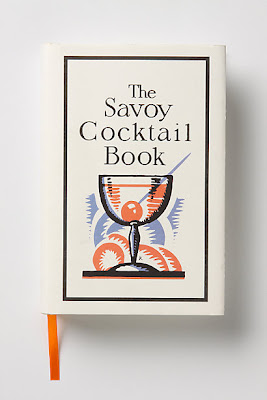 The latest incarnation of the Savoy Cocktail Book
In honor of The American Bar at The Savoy Hotel in London, here's my own concoction called The Painted Lady. There have been other drinks with this appellation, but none so suavely rich and seductive.
The Painted Lady
As usual, the ingredients are by proportion--
1 parts Tennessee bourbon
1 parts brandy (i.e., Korbel)
1 parts Aperol aperitif
1/2 part cherry liqueur
Shaken or swirled in ice and strained into a cocktail glass. No garnish, unless you desire a sweet cherry.
This one is potent, but very caressing on the taste buds. The smoky quality of the bourbon is offset by the spice in the Aperol, while the sweetness of the brandy and cherry liqueur brings out the smoothness in the bourbon. Starting with the bourbon and brandy combination, a number of different minor variations can be considered. A whole range of aperitifs could be substituted, or fruit flavors introduced, though any of these might change the essential fluidity and suavity of this particular combination. Cocktails can be constructed using fruit juices as a starting point, but the classic cocktail begins with a basis of "goods", to which is added certain combinations or augmentations. Drinking liquor straight usually suggests that its flavor is satisfactory alone. True cocktail appreciation, however, isn't about the "goods"--even though better ingredients makes better cocktails. Great cocktails can be made out of "ordinary" standard goods, simply through the manipulation of flavors. Some might say that adding enhancements to liquor makes the poison more palatable, and, once upon a time, that was probably much truer than today. Cheap goods are like anything else--you get what you pay for.
Here's to The American Bar at The Savoy in London. Long may it survive, into the 21st century and beyond!
Posted by Curtis Faville at 1:46 AM