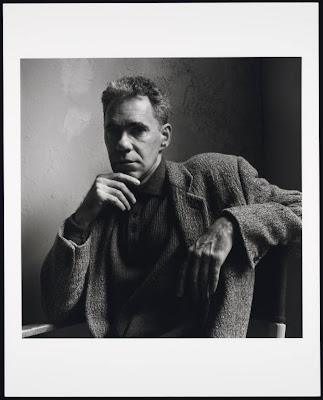 I don't remember when I first encountered the work of Joe Brainard. It must have been in about 1969, during my first year at Iowa. Books by other people--notably Berrigan, Padgett and Company--had covers designed by him, and some of his early prose poems and selections from I Remember [1970-2001] were appearing in little magazines from New York. Then the first volume of I Remember came out from Angel Hair in 1970, with the baby portrait on the cover. I remember thinking at the time that Brainard seemed less like a writer than an artist who'd gotten tangled up with some raffish young counterculture poets. His art work seemed satirical and camp, unserious, but occasionally very funny in a naughty sort of way. Mischief seemed its primary provocation.
Eventually, Brainard's writing--as opposed to his art--became more widely known and appreciated, and I think this probably helped his reputation as an artist. Did I think he published his writing in order to promote himself as an artist? Probably not, since his connections to the writers of his generation was real and genuine. He wasn't a groupie, but an interesting friend. In his writing, he often seemed a little clownish and silly, but he was definitely on to something with I Remember. For someone like me who had grown up in the 1950's and 1960's, there were many uncannily familiar details. Autobiography is a difficult form to do interestingly, but Brainard had hit upon a method which allowed him to particularize his past, without having to be seized up with literary pretense and back-tracking. The detail, and the humor, and a refreshing lack of vanity made the simplicity and directness of the material feel like a revelation. Its originality looked easy to do, but like all truly original innovations, it was not easy. Joe had invented a new form, almost like an ingenious parlor-game. The American post-war middle-class family existence rendered up, detail by detail, from the inside out.
Joe's work turned ordinary life into an archeological expedition, but there was no condescension in the process. He loved things, and was a keen observer of the daily habit. As an artist, his work often gave you the sense of timely hip, of taking a vacation from affectation and pompousness. His difference--of being a modest, shy Gay man in the New York of the 1960's and 1970's--allowed him to assume the persona of the watcher, and the qualities he admired or assumed were the same ones you came to value in his authorial voice: acute observation, personal modesty and equanimity, witty mimicry and a light-hearted sense of humor, a lovable resolution to be better. He was open about his failings and weaknesses, and willing to share intimate tidbits about his personal life without elaborate manipulations. But finally it was a sense of his honesty and directness that stood out most. If the revelation of his sexuality was his deepest secret, his ability to tap into himself with complete frankness was the freedom he chose, and the key to his genius. Personal confession is always a risk. 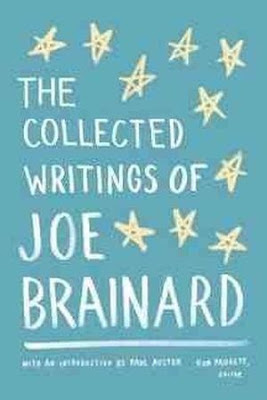 When he got AIDS, it seemed to shut down some part of his creative spirit. He stopped producing art, and went into a kind of personal coma. The story is he didn't want to repeat his previous, Pop Art era, successes, but it's hard not to think that his physical decline led to a slackening of interest in producing artifacts.
Brainard was a minimalist. In his art, as in his writing, an intense interest in the small, the dainty, the efficient facilitated a technique that valued brevity and purity. There was also a serial quality, in which conceptual elaborations of framing led to crazy narratives. He was adept at making faux-comics, and collages from familiar objects, arrangements of the everyday. Again, it looked easy, but took tremendous insight and wit to bring off. Since he hadn't come out of the classical humanist academy, he was free to look at literature--his own writing--as an artistic object, not as the continuing thread of a long tradition. And that is one key to how he was able to delineate subject matter with such canny presence. He never just "told a story" or "drew a still life"--each execution was a carefully considered performance of aesthetic theatre.
And yet, if someone had suggested back in the day that a big omnibus volume of Joe Brainard's work would one day be published by the Library of America [The Collected Writings of Joe Brainard, Edited by Ron Padgett, with an Introduction by Paul Auster, New York: Library of America, 2012], I would certainly not have believed such a thing possible.
I feel privileged to have published a group of Brainard's little prose poems ("Some Prose Poems" -- published in the LOA volume with "30 One-Liners" though originally published (in part) and not credited, despite the fact that the Editor, Padgett, had a poem published in that very same issue) in my L Magazine #2-3, Spring 1973, which can be read, courtesy of Craig Dworkin's Eclipse online site, here. Unlike the I Remember pieces, these aren't about nostalgia, but present-day observation.
Arriving on the scene fully 18 years after his death, this collection feels as fresh as the times in which the work was first appearing. It's lost none of its charm and delight. Though Brainard never questioned the underlying assumptions of syntax--of social currency or of grammar--he was able to project a vivid, enduring body of work out of the most reductive of means. He was able to make cartoons out of language.
I think of his work as one possible branch of minimalism--Saroyan, or Grenier, or the Concrete Poets--working in a conversational mode, making highly lit snapshots of quotidian life out of candid, unexpected events, objects, images, and feelings. Of all the other writers of his generation, I think Aram Saroyan comes the closest in terms of approach and areas of interest. Both writers meditated the underlying presumptions behind ordinary phenomena, listened with an intuitive care, and recreated these in a language devoid of descriptive distance. Like language looking at itself.
This may not be immediately apparent in Brainard's work, since its surface is always so cheerful and well-lit. Acute self-consciousness is one window on the mystery of cognition; syntactic exploration is another. Brainard may seem to be a kind of minor talent when contrasted with writers of much greater ambition and obvious complexity, but his accessibility is a minor miracle. Brainard understood his limitations, and he made ample use of his gifts. Once he'd exhausted the range of his insight, he moved away from both making art, and writing--to concentrate upon a delectation of experience, in what time he had left. Ordinarily we think of that abandonment as a failure of will or ambition, or a negative attitude towards life. But most writers and artists go well beyond the point at which their work generates real interest, repeating themselves. To have made one great innovation, and brought it off--as Brainard did with I Remember--is not a small thing. His work lives.
Posted by Curtis Faville at 6:53 AM

Your coupling of Brainard's stopping of creative work with AIDS is wrong, and troubling.

Brainard stopped producing art for exhibition and writing for publication in 1979 or a year or so later. He continued making art for friends. He died in 1994, some 15 years after he stopped exhibiting. All available information (including Ron Padgett's memoir) strongly indicates Brainard was very active physically (swimming, regularly working out), etc. during much of the decade of the 1980s

I thought about that when writing the piece, but I don't have the exact date of his diagnosis. Do you?

Why this would be "wrong" (if you could prove it), or--even more peculiar--"troubling" is unclear. Is it the likelihood of that connection, or your certainty that AIDS wasn't an issue, that troubles you?

I think it entirely likely that Brainard's changes of heart had multiple etiologies--and that the health issues certainly influenced his creative energy and inclinations. There are many corroborative reports of his increasing depression and isolation in his later years. In any case, "swimming" and "regularly working out" are routine activities for gay males, and hardly evidence of an optimistic mien, in themselves.