I Take Issue With John Berger 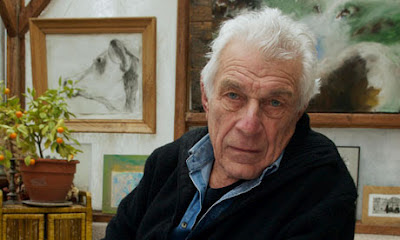 John Berger is a Left art critic and novelist, whose opinionated essays have put him at the center of political and aesthetic debates for a half century. T0day, over lunch, I was reading his essay "Understanding a Photograph" [1968], from the collection The Look of Things [New York: Viking Press, 1974].
I don't read a lot of photography criticism, since I think I know pretty well how people react to photographic images, and what their significance is, in and to the culture generally. Criticism often stands in awe of the photographic image, unable to refine or improve upon it or to render an authoritative analysis of its speculative meanings. Berger manages to make a few general statements which I find very interesting, but these derive from very dismissive conceptions of how photographs are made (controlled), and how photographic image-making, as a deliberate act, is accomplished.
"By their very nature, photographs have little or no property value because they have no rarity value. The very principle of photography is that the resulting image is not unique, but on the contrary infinitely reproducible . . . Let us consider them no closer to works of art than cardiograms. We shall then be freer of illusions . . . It is more useful to categorize art by what has become its social function. It functions as property. Accordingly, photographs are mostly outside the category [of art]."
This argument is familiar to anyone who knows Marxist art criticism, as an attack on the artifact based on its commodity value as elevated fetish of capital. For anyone with a passing knowledge of photographic processes--that is, in its pre-digital phases--nothing could be further from the truth than to claim that photographs are "infinitely reproducible." A static negative--which of course is itself subject to many different kinds of manipulations--is, in fact, as Ansel Adams famously said, the "score" while the print is the "performance." It is true that any photography student, with a week's training, could indeed make a recognizable print from any of Adams's important negatives, just as they could of any of a hundred famous photographers' negatives. But the comparison stops right there in its tracks. No two prints are ever "the same"--and even if one wanted to make an endless string of identical images from a single negative, the mechanical methodology required to do that would remove the process from human creative intention entirely. The fact is that every photographer sets out to make a specific image of a specific scene, but that the final realization is almost never the result of fully conscious and controlled intent. And the process of making a specific print which satisfies the complex demands and intentions of any artist can require hundreds of man hours or trial and error, subtle adjustment(s), etc. Berger betrays a deep lack of sympathy for, and a shallow understanding of, the "values" of photographic prints--apparently relegating these gradations to pointless fiddle. It's rather like saying that all prints are technically of about the same utility and weight.
"The objects recorded in any photograph (from the most effective to the most commonplace) carry approximately the same weight, the same conviction."
How could any serious critic make this astounding assertion? In one sweeping gesture, he dismisses subject matter, point of view, technique, feeling--everything that distinguishes one photograph from another--making of photography a generic, dry industrial function without any range of value or subtlety. And yet even industrial processes involve enormous subtle and delicate and difficult adaptations and incremental planning and quality control. Nevertheless, Berger has at least two, maybe three other things to say about photography that are sheer genius.
The first pertains to the image-maker:
"Photography is the process of rendering observation self-conscious."
--which is another way of saying that when we "take" a photograph (or make one, or one takes us), we are realizing our being alive at that moment, we are memorializing that instant as a symbolic record of what occurred to us to think and feel about it (the scene, or subject). This act can be measured as a gesture or act of greater or lesser intent, of how accurately or powerfully or emotionally we have experienced it. Just seeing with our own eyes is a step less "conscious" than making a photograph--that's an unusual idea--particularly when you realize that our visual-mental apparatus is in fact a kind of camera, one in which the "saved" images are constantly being sorted and filed and saved in the vast storehouse of our visual memory.
The second thing he says is:
"For a man with a [photographic print] . . . in his pocket, the quantum of truth in an "impersonal" photograph must still depend upon the general categories already in the spectator's mind."
In other words, there is a corresponding mental equivalent (Stieglitz's idea) for any image, and the degree to which an image or scene corresponds to something powerful or significant is a measure of its meaning and value. But I have trouble following Berger's characterization of a photograph as an "impersonal" thing; in a specific sense, nothing is more personal then a photograph. It is true that the range of kinds of images that are most often made become generic and predictable and consequently bland, but those superficial limitations are routinely exceeded by those with talent. Great portraitists, for example, are able to take our breath away with the revelations they make out of great faces and dull. If what anyone could deduce from an individual human face were nothing more than a lolly-pop, then perhaps Berger's verdict would be proximate.
It's as if Berger needed to be able to believe that making a photograph were an inert, almost automatic process, by which anyone could take a picture of anything, with no effort and no pre-visioning at all. And further, that it would involve no aesthetic deliberation, no conviction, no familiarity, no responsive impulse, no feeling. Berger's a great critic, but he certainly misses the point with photographic image-making.
Posted by Curtis Faville at 5:25 PM

i still visit over here once in awhile

some very fine posts on occasion

John Berger is not first and foremost a photographer. In order to complete a project, he once took instruction from his friend and colleague Jean Mohr. Since that time he has remained passionate about photography and, despite his 'theoretical and distanced' writings 'photography is still, first and foremost ... a means of expression. The all-important questions is: What kind of means?'

Berger begins his essay with a discussion about a found photograph: an image which was given to him with no contextual information at all. Because of the lack of information, it is almost impossible for the viewer to infer anything definite about the subject matter (a man and a horse, in this case). We cannot even date the image conclusively, let alone say why the man was photographed with a (his?) horse and what they were doing before and after the photograph was taken. To quote Berger: 'The photograph offers irrefutable evidence that this man, this horse and this bridle existed. Yet it tells us nothing of the significance of their existence.' (p86)

Whilst a photograph encapsulates a moment in time, recording an event which has been, it can never again be part of a continuum: 'unlike a lived past, it can never lead to the present'. Berger's point being that the photograph contains two fundamental messages - the event which has been recorded (Barthes' referent) and the slightly less obvious but nonetheless important notion of a 'shock of discontinuity'.

This is a really interesting point - the photograph records a moment in time, something which happened minutes, day, maybe years before the viewer sees it, but between the moment the shutter snapped and the present time there is, in Berger's words 'an abyss'. (p87) He suggests that we are so comfortable with this idea that we rarely acknowledge it except when there is particular significance attached to the photograph, for example when it is of a departed loved-one.

Once a photograph has been taken there is an undeniable record that the subject matter existed; 'the photographic evidence is less ambiguous than any eye-witness account'. (p88) If there is to be any ambiguity, Berger argues, it is in what happens after the moment has been recorded. The instant in time recorded in the photograph lacks meaning unless we give it a past and a future, and it is the role of the photographer to do this when selecting the both the subject matter and moment to release the shutter.

Berger goes on to explore this notion of ambiguity further, by saying that all photographs have been 'taken our of a continuity'. (91) When the image is captured, even of an ostensibly intransigent scene such as a landscape, there is a break in the continuum - in that example it is the light, the cloud formations, the seasonal context which are never to be repeated.

Words and photographs are inextricably linked: 'the photograph begs for an interpretation, the words usually supply it'. (p92) Berger argues that the two are symbiotic - whilst the photograph has irrefutable evidence on its side, it is weak on meaning; and conversely the words which supply that meaning are given authenticity by the evidence in the photograph. The question now asked, which underpins much of this whole essay, is whether the intrinsic ambiguity of a photograph could in fact lead us to 'another way of telling'.

The piece from which these quotations was taken is not the same one I discuss in my blog piece.

I'm unclear what the point of your comment is, except to note that Berger's comments, though interesting, do not take into account the real contingencies of the photographic process. He thinks of photography as some kind of autonomic process in which the photographer (artist) is without volition or choice--or that a photograph makes that decisive function irrelevant. That's absurd. It's the sort of position someone would take who never took the trouble to find out how a photograph is made. It isn't in any sense an automatic, or easy, or "unconscious" act.

One wants to stay on subject, and address the issue as it's presented. You can reference the essay by consulting the book I was reading, The Look of Things [1974].