Due Diligence - The Sandusky Verdict & Aftermath 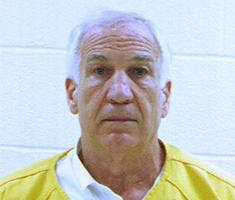 an interesting post. I was just watching a television ( "Vision" network)program on the sexual abuse of young Hasidic youth from their own Rebbes, occurring in prestigious Jewish schools in New Jersey. Working on pretty much the same 'in-house' policy of cover-up, denial and control characteristic as has been practised by the Roman Catholic church, their own Tribunals have had oftentimes to resort to intimidating young victims, through brutally humiliating tribunal interrogations,into recanting or denying allegations altogether. I recall one leading Jewish religious figure even going so far as to say that no one religious group does more to address a type of sexual deviancy that is, in his estimation, natural to the human race. Here's a case of the Paterno logic as found in even the strictest, most orthodox religious institutions.

Organized sports, like organized religions, with their own hierarchies, ritual 'group think' and private internal controls, are always prone to this way of justifying deviant sexual behaviour among its high priests. The analogy is not a fanciful one and the Paterno case bears me out. A friend of mine, who'd once played basketball at Virginia Tech years ago, once told me that across the women varsity basketball organization male coaches having sexual relations with athletes (sometimes even in shower rooms)were par for the course.

There's a weird kind of moral relativity when you enter the arena of absolute guides to conduct.

I see Sandusky's sins as relative to the context and conditions of his actions, rather than an absolute sin.

I once wrote in an undergraduate paper, discussing Oedipus, "his religion was his fate"--for which the professor gave me an A.

I think there's a lot of truth in that. What we believe, and teach our children, becomes the law. One could imagine a primitive society in which a shrewd witchdoctor would have access to all the best looking young girls in the tribe. In that context, Sandusky's kinds of actions would have a completely different spin.

For me the central contradiction is between how we view acts like his publicly, and the PC positions we find ourselves taking, when pushed into a corner. I'm no more likely to accept an argument in favor of buggery if Gore Vidal says it, than I am if Jerry Sandusky says it. And yet most people do just that, living with both "truths" as if they were completely compatible.