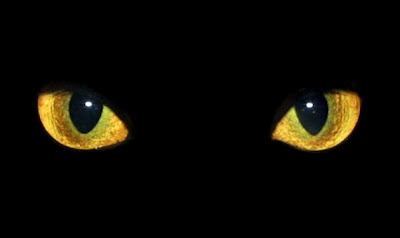 You see them in Marseilles, lounging near the fish-stalls in the morning, bathed in the low-tide odors of the Mediterranean catch. You see them in Mykonos, posing on whitewashed staircases at noon. You see them in Alexandria, hunched on a window-sill, looking at the tourists. In Paris, beside a flowerbox on the third floor, or sneaking down a back alley on some private assignation. In London, on a leash, or sipping water from a catch-basin. In Barcelona, scurrying across a deserted square at dawn. In Brussels, licking cream from a dish at the back door to a famous restaurant. You see them in New Orleans, in the French Quarter, peering out behind a rusted iron grill. Looking scrawny and forlorn in Bangkok, orphaned. Or pampered and fat in Amsterdam. But always alone, standing some way apart from the tabbies, marked out by their difference, independent, isolate, imperturbable. You see them in Pasadena, homebound and spoiled, by an old rich lady in furs. You see them on cottage roofs in the Cotswolds, hunting mice among the thatch. In Berlin, in the rain, huddled under a shrub. You see them in Rome, furtive and wily, suspicious of you. Walking along the river one day in Boston, one crosses your path, not looking back. They belong to no one, these black cats, they are incognito and ubiquitous, and though they may camp under your roof, and purr with a pleasure that is neither here nor there, they are wild, only pretending to be civilized. Born in captivity, or perhaps in a barn, in wet hay. Nurtured, or abandoned, they would fend for themselves, or find a mate. Or a caretaker. Loyal to no one. Selfish, unpredictable. Bland, passionate, lazy, enterprising. Lost; found. Curious; mysterious. Watching from the edge of a wood. Calculating the odds. Preening. Posing. Dreaming. From the dark side of the moon. Sleek. Elusive. Sly. Companionable. Clairvoyant. They are the black cats.

Very nice; very nice indeed. Puts me in mind of Carl Van Vechten's The Tiger in the House. I hope he can have read this.