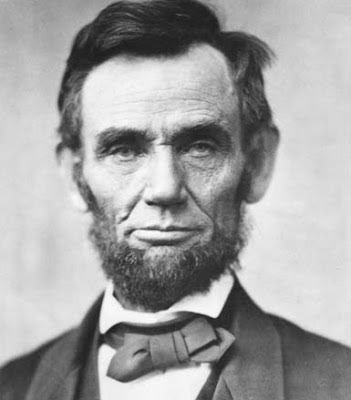 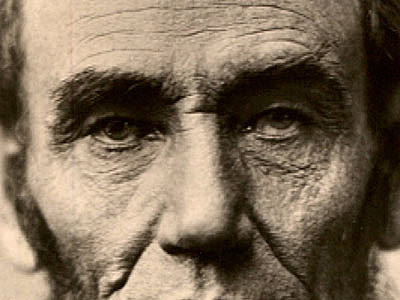 I've always been fascinated by Abraham Lincoln's face. The historical figure we know has been the subject of countless dramatizations, elegies, studies and biographies. Had he not been assassinated, it's likely that he would have gone on to produce literary artifacts that would have enlarged our understanding of his character, as well as the motivation behind some of the decisions he made while in office. Lincoln was our only "civil war President": and as such, his prosecution of the conflict always had the additional ambiguity (and remorse) of knowing that the "enemy" were his own countrymen.
Look at these eyes--

Lincoln is often seen as having an heroic visage, but it's just as obviously an homely one as well. It's a country face, not a city face. It's a face that's comfortable in farmland, or in the woods, a serious face, but a working face, a face that seems to have seen a great deal. We tend to impute deeper implications than perhaps is justified without our knowledge of his career. What would you think if you met someone with a face like this on the street today? Those huge ears. That great big mole. Those weary, wrinkled cheeks and forehead.
What do those eyes tell us? Looking at them dispassionately, you might even think they suggested malice, or evil. It's not a face you'd want to face in a debate. A confident, powerful look.
Do we see in it the reluctant determination to prosecute The War Between the States with all the necessary conviction and even anger we know he expressed when the going was difficult, when men on both sides were dying in unprecedented numbers on the battlefield? Are these eyes which have seen and felt suffering, and long frustration?
Or are these the eyes of illness, of some endocrinological disorder which brought on excess fatigue or nervous distress? Are these eyes robbed of regular sleep, eyes which have read far into the night (in bad light), or worried and fretted about dilemmas and crises in which there was no better choice?
The central fact of Lincoln's Presidency was the internecine division of national character, a fragmentation of the kind that is certainly the most harmful and bitter that men experience. Brother against brother, native against native, friend against friend. As President, Lincoln resolved that the best outcome was the preservation of the Union, not simply a peaceful bifurcation. But in order to achieve that, the Union would have to prevail over the South militarily, it would have to defeat it thoroughly. In retrospect, it appears that the Confederacy really had no chance in the long run, to prevail. But in order to bring that end about, the Union would have decisively to conquer the South, with no ambiguity. The South had to be utterly thwarted. This process was probably the most painful period in our national history, one half of the nation laying waste to the other, without remorse, almost without conscience.
There is a temptation to see or find all this emotional vicissitude inside Lincoln's face, in those dark, sunken, despairing eyes. But this is undoubtedly an overlay of impression upon what was simply a very craggy, "purgatorial," even sadly grotesque face. Lincoln's face is one of the great ghastly faces of all time, like a sort of freak, like the Hunchback or the Phantom or Mr. Hyde or the Elephant Man. He's the magnificent stuff of our heroic common soil raised into dignity and honor through the opportunity afforded by intelligence and democratic institutions.
It is not a beautiful face, not charming, not happy, not easy. It wears its skepticism and suspicion and resignation loosely, but with interest. Underneath all that seriousness there is curiosity, and a confirming affection. It is patient, but sad. Consternated. Conflicted. Pained. Resolved.
Posted by Curtis Faville at 8:15 AM

when at half-time the Redskins Marching B
broke into Dixie the entire crowd rose to their feet and cheered they cheered louder than they did for the National Anthem.

D.C. was always a southern town about 50 % southern whites and 50 % blacks

some have hypothesized chronic depression for the old hero

he carried a load
that much is certain

i ain' no phuqqinh robot