Mono Lake is a shallow saline soda (alkali) lake in Mono County, California, on the eastern side of the Sierra, about 120 miles due south by southeast from Lake Tahoe. Because it's completely landlocked inside a basin, and had no drainage out, deposits formed from the incoming streams, lending it its strange chemical composition. Due to the interaction between limestone springs under the lake-bed, and the lake's calcium, so-called "tufa towers" were formed over millennia, which were once submerged beneath the lake's surface. When Los Angeles seized the incoming drainages into the lake and diverted them for their use, beginning in 1941, the level of Mono began to fall. By the early '90's, most of the tufa towers had been exposed. Conservationists persuaded Los Angeles to restore the incoming flows beginning in 1994, and the level of the lake has been steadily rising again.

Mono Lake was a curiosity and an attraction as early as the mid-19th Century. Indians had been living in the area long before that, but habitation was limited by the dry hot climate and scant vegetation. Mark Twain felt it was the loneliest place on earth, as he described it in Roughing It [1872]. But photographers quickly were moved by its stark contrasts and fascinating shapes. Ansel Adams and Edward Weston, and later Brett Weston, were inspired to make powerful photographic compositions out of it. In the decades since, it's become a destination for serious photographers who make the pilgrimage to the Owens Valley area to shoot at Alabama Hills, Bristlecone, and Mono. I went there in the late 1980's with my 8x10, and proceeded to expose dozens of negatives. The one below has probably been duplicated by hundreds of amateurs and professionals alike. Changing cloud patterns can alter the mood of the place hourly. I used the framing device of two shorter towers in the foreground to set off the island of towers in the background. The tufa is white or dull yellow in the sun, and reads as zone 8 or 9 in photographs. The pure blue of the water reads as 3-5. A red filter of course intensifies these differences along the log of the range of light values, darkening the sky, the water, but not the tufa. It can appear moon-like from some places. Shots like this are more interesting in black and white, though color photographs may benefit from the wild-flowers that bloom around the edges of the lake. (Because of the rising water-level in the years since I was there, this picture wouldn't be possible today.) 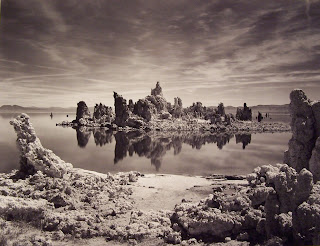 From the sky, Mono looks barren, almost like another planet. There undoubtedly exist similar kinds of formations on other planets like ours in the limitless depths of the universe, in other solar systems. 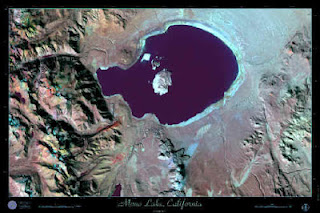 Brett Weston made many awesome images here over the years. Here are three which, though similar in principle, are each uniquely inspiring. 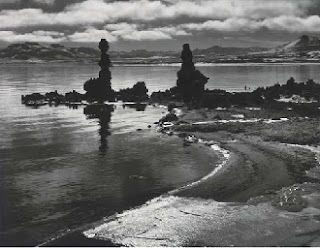 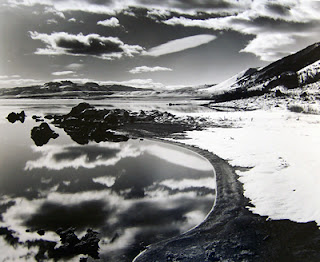 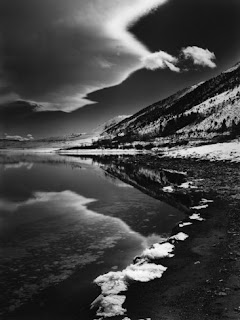 The town of Lee Vining lies just at the western edge of Mono, right beside the road exiting out of the eastern side of Yosemite National Park. Visitors coming down out of the Tioga Pass side drop down into the Owens Valley and Mono Basin to the awe-inspiring sight of this big flat round pond. It's a wonder of the world.