The days of postage stamps may be numbered. From what I hear around the U.S. Postal Offices, stamps may soon become obsolete, ending a nearly two century love affair we have had with these lovely little adhesive wafers. The first postage stamp was used in 1840--the one penny black with Queen Victoria's profile portrait.
As a boy, I took up stamp collecting with some enthusiasm. I got a big black world stamp album for my 8th birthday, and began assiduously to fill it up. I had two companies sending me little envelopes of stamps "on approval" each month, and I remember being frustrated, month after month, that I couldn't afford to keep more of the selections offered. Even at a few cents an envelope, the cost mounted up fast. A few little packets could cost up to $5-15, and for a paperboy whose monthly income total amounted to little more than $25--most of which went right into my college savings account--I was usually right on the edge of my budget.
The "stamp" world resembled the real world only tangentially. The world of the National Geographic, or of Boy's Life, or of U.S. News & World Report, or (later) The New Yorker--all of which I subscribed to, as I was growing up--presented a different picture. Some countries, like Monaco or Vatican City, printed stamps principally for collectors, and they were usually more valuable if they had actually been used to send a letter, than they were in their unused "mint" condition. "Commemorative" or special issues were also made for collecting. Stamps have always featured engraved imagery, instead of photographic pictures. Originally, it was the only practical way to make a stamp that couldn't easily be counterfeited; but it's still the way most stamps are printed, I think. I suppose it might even be possible to make fair copies of stamps nowadays, with computer printers, though I doubt anyone would go to much trouble for the small amounts of postage that still apply to letters. Parcels are heavier, but I don't think you can simply put stamps on packages and drop them in a post-box. You still have to visit the post office and pass them through a teller.
I was always fascinated by stamps that had interesting images. One of the best was the one showing a blimp, or rigid airship. The famous U.S. Postal Stamps featuring the German ship the Graf Zeppelin in 1930 were designed to commemorate the visit of that craft to the United States, and were only good for mail carried by the dirigible. These craft had already become obsolete, for practical purposes, by the beginning of the 'Thirties. Passenger fares were exorbitant--in the case of the 1930 trip, individual tickets went for $9000 a piece (or $126,000 in today's dollars). Perhaps a little like going up in a space station today!

In 1933, the U.S. Postal Service issued another Graf Zeppelin stamp, this time showing the starting and ending destinations--the Chicago Federal Building on the left, and the Friedrichshaven on the right, with the words "A CENTURY OF PROGRESS FLIGHT" across the top.

Just four years later, the Hindenburg passenger airship would crash in Lakehurst Naval Air Station in New Jersey, which effectively brought the airship era to a close. Blimps, of course have continued to be maintained and flown, mostly for advertising and public relations purposes, in the decades since. 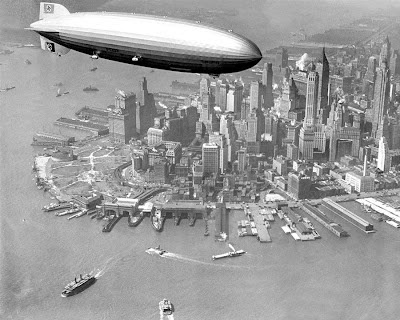 The cause of the ship's demise has never been conclusively demonstrated, but the highly flammable gas (hydrogen), and the flammable skin of the body of the craft, both made fire a highly likely event, given any kind of ignition, man-made or naturally occurring. 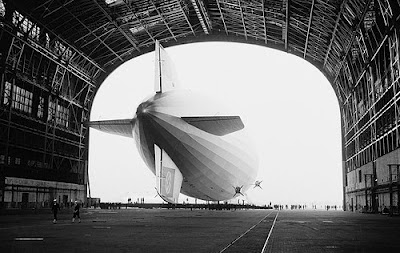 The Hindenburg disaster was one of the first great media events of the modern age, with its newsreel film and Herbert Morrison's hysterical voice-over as the event unfolded in front of his eyes. Though only 36 people total lost their lives, it was as if an atom bomb had exploded in New York City, given the coverage and attention it garnered. It showed how candid moving picture photography could not just record history dramatically, but could evoke powerful reactions.
The dramatic conflagration against the black early evening sky filled people's imaginations. The intersection of technologies--manned flight inside a big cigar shaped machine--and the rapid dissemination of the live images by way of recordation and image and sound reproduction--created a crucial, unforgettable moment in history. 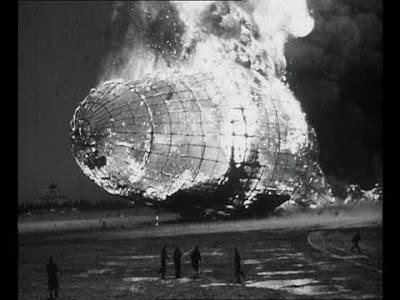 The scale of the event seemed overwhelming. The tiny dark stick-figures watching from the ground of the air field are dwarfed by the immensity of the crumbling superstructure, the collapsing curved rectangular girders, melting like plastic. 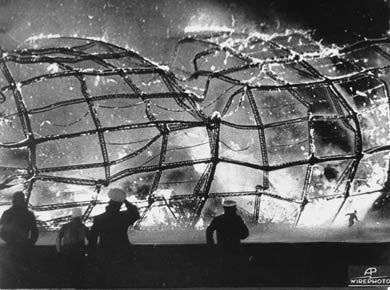 Obviously, there was never a postage stamp designed to commemorate this air disaster. But there have been postal "errors" which are like a metaphor for the fallibility of human ingenuity. The famous so-called "Inverted Jenny" is probably the most prized object in American philately (the study and collecting of postage stamps). The error occurred as a result of the printing process having required two separate runs through the press, a procedure notoriously prone to error. Individual frames in good condition now go for about a million dollars apiece on the auction block. 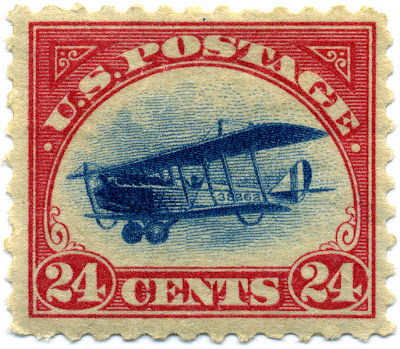 The desirability of this error stamp is due in part to its scarcity--as very few were printed and even fewer, of course, survive--and also, I'd wager, because it depicts an early design of aircraft. Postal air service was a very novel thing in 1918, when the U.S. Postal Service initiated service, at this astoundingly high rate! The plane pictured is a Curtiss Jenny, a bi-plane of the kind initially used to carry the new air-mail. It is believed that only a single whole sheet (of 100 stamps) escaped into use. This sheet was bought, whole, by stamp collector W.T. Robey, who sold it for $15,000, after fending off the postal authorities, who wanted to buy it back and remove it from circulation. Eventually, the sheet was partially broken up, and the resulting singles and blocks of four (and one of eight) went on to be traded over the years, always rising in value. 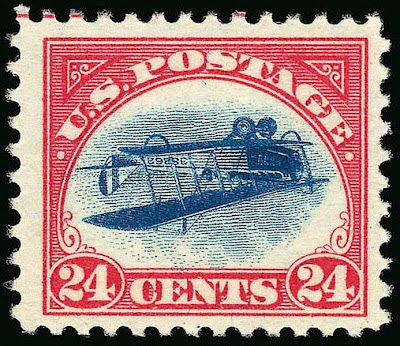 Postage stamps are fascinating objects. Earlier, on October 18, 2009, I wrote a blog about the artist Donald Evans, who created imaginary stamps as works of art. The stamps are designed and painted at scale, the difficulty of which may well be imagined. His work also involved the invention of imaginary countries and events, a metaphor, to my mind, of how in childhood we create private universes or worlds, into which we escape. Private aesthetic worlds are of course akin to the generic narrative formulae we're all familiar with: Science Fiction, Fantasy, Romance, Westerns, Horror, and lately the worlds of Comix and Graphic Novels.
Once upon a time, manned flight was just strange and amazing enough to seize people's imaginations that having a postage stamp with an aeroplane on it was like using a hand-held communication device for the first time. A little like a magic trick from the future. Airplanes and blimps and postage stamps--someday they'll all take their place beside buggies and bustles and bundling boards. They all have their devotees, their admirers, and their detractors.
Posted by Curtis Faville at 10:28 AM

just pulled out my (black) The All American Stamp Album and am (re-)finding a few things that I stashed in the stamp album. One thing being the blue Lincoln Head Cent
fold-out book which goes 1941-1952-D and blank spaces (circles) for another page and 5/6 of a page
the book is nearly full of pennies and hand written in dates"1953-1964-D)

Back to the stamps: My book with two screws that you can add pages to begins with "Issue of 1847"

and the OLDEST two stamps that I have: the 1908-09 green Benjamin Franklin "ONE CENT" and the purple "3 CENTS" George Washington purple. (interesting that BF comes before GW. All of the stamps on the page are of GW except the ONE CENT

My other stamp-book: The Ambassador Postage Stamps of the World the Abyssinia(Ethiopia), Paraguay, San Marino, and the Siam(Thailand) stamps are particularly beautiful.also found in this album 5 old comic books two being Captain America #123 and ZAP #7 The Captain America has a Joe Weider full page advertisement ("The Strongest, most Virile and Admired Men are Built by the Weider-System - FAST!" (1969).