The first live major league baseball game I ever saw was at old Seals Stadium in San Francisco, in 1958, the first year the Giants arrived from New York, August 16th, 1958, against the Chicago Cubs. The Giants would only play one more year at Seals before moving to Candlestick Park, where they persevered until the completion of China Basin in 2000.

How do you codify the sentiment you feel about our national sport? For me, it will always be an enormous imaginative preoccupation, fed by fantasies of my own playing days as a little leaguer in the 1950's, and the subsequent decades of on-again/off-again fandom in the Bay Area. Aside from a summer or two in the midwest, where I watched a few Cub games on local television, it's always been the Giants or the A's for me. I saw the Athletics clinch the 1972 division championship at the Oakland Coliseum on September 28th, 1972.

Why do we care if a squad of overgrown boys playing a boys game paid by some rich guy compete with other squads of overpaid overgrown boys from other metropolitan centers? Some have tried to explain it, i.e., Roger Kahn in The Boys of Summer [1972]. It's one part nostalgia, one part lazy boredom, and one part misplaced civic pride.

The story of teams is often a story of their owners, or the owners' management. They can determine the character of a team, through their choices and hiring of individual players, their affect on the playing venues. The A's were owned by Charley Finley when they arrived in Oakland. Charlie was a good businessman, but a little bit of a cheapie. He thought players were overpaid, and he ran his organization like a minor league outfit.

When the Giants came west in 1958, Horace Stoneham had owned the team since 1936. He was a genial owner who cared as much about the game, and the players, as many of his most devoted fans did. When attendance at windy Candlestick Part fell off, he sold the team in 1976 to Bob Lurie, who eventually sold it, in 1976, to the Magowan Group, which still owns it.

I was eating dinner out in San Francisco one auspicious night on October 26th, 2002, during the playing of the 6th game of that year's World Series, with the Giants leading the Angels three games to two. When we sat down for dinner, the Giants were leading 5-0, and we were secure in our assumption that victory was ours. When we'd finished eating, someone with a transistor radio informed us that the Angels had completed a miraculous comeback and won 6-5. The Angels went on to win game 7 and there was no joy in Mudville.

The 2010 Championship is still fresh in everyone's mind, our ragtag company of cast-offs and fresh-faced phenoms embarrassing the Phillies in the NLCS and mowing down the powerhouse Texas Rangers in the Series. 2011 was a return to earth, with our MVP-to-be Buster Posey going down with a broken ankle, and the predictable fall-off by the journeymen (Huff, Ross, Torres, Rowand, Burrell). 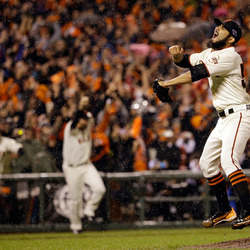 When 2012 began, no one was sure what kind of team we had. Huff, Sandoval, Posey, Crawford and Sanchez seemed set, but we had new position-players--Pagan, Cabrera, Blanco--not exactly the offensive powers we thought we needed. As the season progressed, there were serious setbacks. Brian Wilson's elbow popped, Melky was suspended for the balance of the season for doping, and Timmy lost control of his fastball (and his confidence). But there were encouraging signs. Pagan, and Posey were having career years, and the late acquisitions of Pence and Scutaro improved the offense considerably. Zito had a comeback. And Vogelsong was lights out. Meanwhile Bumgarner and Cain were solid, and our "bull-pen by committee" actually was able to overcome the loss of Wilson ("Wiiiilllllllllssssssoonnnnnnnnnn!"), with Romo blossoming into something resembling Dennis Eckersley, with a wicked "invisible" slider. Belt and Crawford made significant progress towards realizing their potential, and by the last two weeks of the season, we were walking all over the Dodgers in a runaway of the National League West.

Who would have thought, looking at the statistics, that the Giants would match up well against either the Reds, the Braves, or the Nationals? As it turned out, of course, the Braves were eliminated, in the new one game takes all new play-off wild card system. Then St. Louis polished off the Nationals, and it was suddenly us, the Reds and St. Louis. Coming back after being down three to one against the Reds was stunning enough, but then doing the same against the Card in seven--well, it doesn't get any better than that! 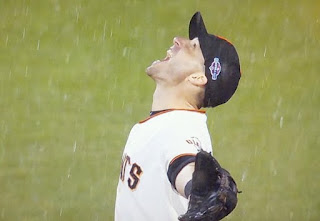 In the bottom of the ninth inning, ahead 9 to nothing, and the rain deluging Pac Bell, Marco Scutero, sensing the inevitable victory, impulsively spread his arms apart and stared up into the sprinkling rain in a celebratory gesture that reminded some people (like me) of the scene in Shawshank Redemption, where Andy Dufresne, having just crawled the length of four football fields through sewer water to freedom, tears off his prison shirt in a cleansing rainstorm and makes the same gesture towards heaven. 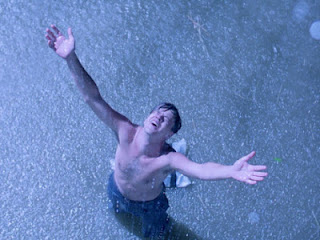 The emotion was different of course. We hadn't been imprisoned. We hadn't escaped from anything. We'd just triumphed over impossible odds to get to the World Series. We'd been down, and down, and down, and down, and had picked ourselves up off the mat time after time. A couple of years ago, my old friend Mike Tormey, a retired BART worker and part-time antiquarian bookseller had told me there was "this guy" playing for Boston, named Marco Scutaro, a real gamer who knew how to play the game, was a great fielder, and a solid clutch hitter. Mike had been watching this guy his whole career, and figured him for an under-rated star. Marco ended up going to Colorado after leaving Boston, and I forgot about Mike's little observation. Then, when Brian Sabean picked him up on July 27th, I didn't remember Mike's opinion, but then I did. Of course. And as we all now know, Scutaro became the key player in our late and post-season run, hitting .362 down the stretch and taking MVP honors in the NLCS. Mike, you're a genius.

And the Giants are playing Detroit for all the marbles beginning today. Let it rain. Let it pour. Let the sky open and the heavens descend.

As a Cards fan, born and bred in St. Louis, their collapse was hard to take. (Not that the St. Louis hasn’t had their successes, only last year, and second only to Yanks in World Series appearances).

Baseball seems to be the sport favored by most poets. Especially in San Fran, perhaps because the Giants move to the Bay Area roughly coincided with SF Renaissance?