A rose is a rose, by any other name, would smell as sweet. They who feel their thought as immediately as the odor of a rose. He arose at break of day to see the last dew drops upon the petals of the roses. Google your mind and what turns up?

Roses on stems have the look of knowing they are being looked at. They pose in such a way as if to say. Self-consciousness in nature makes wild feelings domestic. The music of their arrival reminded them of sounds, of scents, of memories of conversations. 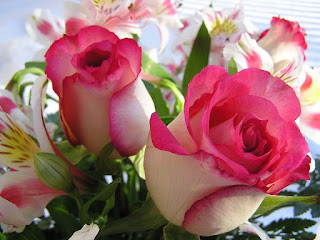 What they shared they shared in private. The symbol of their longing was a petal torn from time. They turned inward towards a silence, quieter now than before. All things approached thus, were closer. Arranged to make a scene. 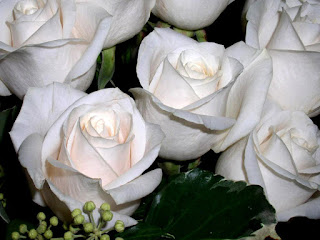 The smell a rose makes comes from the sap inside the stems, which draw moisture up from the roots in the ground, designed (along with brilliant pastel coloration) to attract pollinating insects, in order to promote reproduction. In other words, a flower's beauty and scent are survival techniques.

We don't need alcoholic drinks to survive, but the human sense of taste is quite sophisticated, and our ability to give names (nomenclature) to the variations in flavor is one mark of our refinement as a species. A mildly intoxicating sensation is what some people feel in the presence of roses, in a rose garden. What does an insect feel as it descends into the center of a flower to gorge itself on nectar? Probably is in a state of heightened consciousness, as we used to say back in the 1960's.

Cocktails usually don't make me feel as if I were in a "heightened state" of consciousness, but this concoction comes close. Mix one and see what you think. This recipe is for a single drink.

To describe this recipe as heavenly is an understatement. I don't know what the magic ingredient is--if there is one--but perhaps the coconut syrup is the secret. 'Tis the season to be merry--between Thanksgiving and Christmas--so there's excuse enough.