There Are No Words

Our Giants' path to the championship this last weekend was impossible to anticipate. At mid-season, with the loss of Wilson and Cabrera, few would have predicted that this team would go as far as it did.

Cain and Bumgarner showed the steady improvement which had been expected of them, and Vogelsong was as good as he had been in 2011. Lincecum fell down, but Zito made a comeback, and the bullpen combination of Casilla, Affeldt, Lopez, Kontos and Romo proved more than adequate to fill in for the absent Wilson. Offensively, the team still lacked power, but Posey fulfilled his early promise (winning a batting title in his first full season), and Pagan and Scutero and Belt stepped up bigtime.

What might have happened had Melky not been suspended. It's an intriguing question, considering how well the team played after he left. Sometimes a sudden vacuum will cause a readjustment which was unimagined. (The talk now is about whether the team will decide to pursue Cabrera for the 2013 season, given their success without him, and the example that keeping him, after his suspension, might set for the team going forward.) 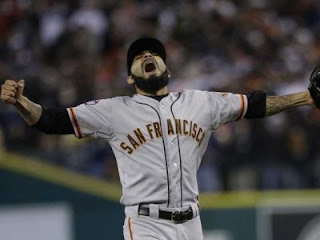 With two championships in three years, by a team which historically was one of the weakest hitting groups, there are some who are asking whether the chemistry of this combination might not serve as a new model for the ideal mix. Clearly, the Giants are now a team that lives on its pitching, with a team ERA (3.68)  a full .64 lower than its runs-per-game average (4.32). What kind if statistics measure the true performance of a team? In a power-rich era, the champion is the weakest of all in terms of traditional criteria. What are the implications of this outcome?

I've said before that a major league team--a collection of very talented individuals from varying backgrounds and experience, all presumably working towards a common goal--is not a machine, it's an organic phenomenon. It's alive. It undergoes change. It responds to challenges or fails to meet them. And there are several different kinds of chance. The indeterminacy we see in contending groups of players is the subject of much speculation, some of it live gambling. The kinds of data that go into the intelligent consideration and setting of odds can be tweaked and teased until you're blue in the face, but how much do numbers tell us?

Contextual data--that is, data that measures combinations of performance under differential applications--is a new kind of science. How many times did a certain hitter get a hit with two or three runners on base with less than two outs, when the team was behind by less than two runs after the 7th inning, when the team was playing on the road, and the season was still in doubt? In the first place, someone has to record all that stuff, before it can be manipulated. On the intuitive side, there is the obvious. Anyone who watched Marco Scutaro for the last month of the season, and during the playoffs, could read his face and body language; his statistical performance was the consequence, but when put together with what you could see, you knew immediately that this guy was totally focused, and at the top of his performance curve. Whatever it was that was motivating him, or permitting his mind and body to function in this way, could be expressed statistically and through empirical observation.

But professional athletics is not a science. You can put the duck into water, but you don't know where it will swim, or when it will fly. All the owners and general managers and coaches and scouts can't predict how a group of guys will gel, or excel, or overcome the pressures of competition and boredom and envy and frustration and distraction, to compete at the highest calibre. Competition may in a sense be a metaphor for the Darwinian principle of existence, but in the end professional baseball is just a game men play for the entertainment of spectators. How silly is it to want to succeed at such a pastime well into one's adult life? In a sense, nothing "depends" upon it the way we depend upon the performance of a bank, or a social agency, or construction firm to solve problems and needs in the "real world." Of course, big-time sports is about big-time money, and everyone who feeds at that trough can testify to the rewards. Opportunity in a capitalist society may present in many different guises, and the high-def high exposure world of popular professional sport is the crowning glory of capitalist glitz. 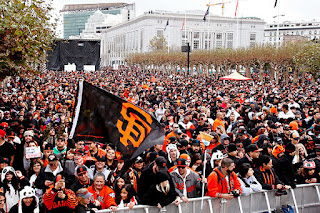 We celebrate our sports heroes in the same way we do our military heroes, or our great artists and scientists, though in a more demonstrative fashion. Yesterday, San Francisco held its victory parade down Market Street, ending up at the Civic Center Plaza. Ecstatic fans cheered and jostled one another for a view of their heroes as they passed by in jovial delight, basking in the fervor and exultation of unquestioned triumph. 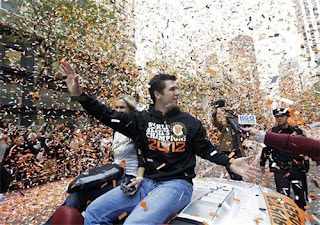 Regard here Buster Posey--with his peach fuzz beard, looking as if he might be ready for the junior high school prom--in a blizzard of confetti. Who would not want to share the dream of his improbable transcendence? There is no one to stand behind him, holding a golden crown, to whisper in his ear that all victory is fleeting, because he's sitting on a car hood, instead of in a chariot.

Posted by Curtis Faville at 9:50 AM