The Delta Queen for Superbowl Sunday 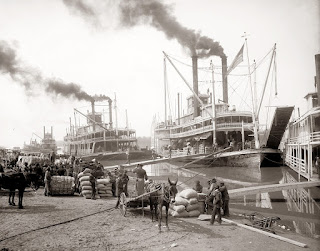 The last time I commemorated the Super Bowl with a new cocktail was in February 2010, when the victors that year were New Orleans own Saints. In the intervening two years, the Saints have fallen from grace, and our own 49ers have risen again from the ashes of a decade of mediocrity, and will vie this Sunday, February 3rd, in Super Bowl XLVII. The history of the 49ers previous Super Bowl appearances is now a storied legend of the game. Under the ownership of Eddie DeBartolo Jr. beginning in 1977, the Niners won five NFL championships, never having lost a Super Bowl appearance. 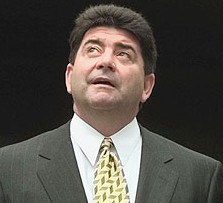 Fans and non-fans alike will recall that Eddie lost control of his beloved franchise in 2000 as a result of his being involved in a corruption pay-off scheme with Louisiana governor Edwin Edwards to obtain a riverboat gaming license. After Eddie gave it up, the 49ers passed to his sister Marie Denise DeBartolo York. The Yorks pretty much made a mess of things with the team, and it wasn't until they handed the reigns of the management of the franchise to their son (Eddie's nephew) Jed York, that things began to turn around. The Niners lost the NFC Championship (the precursor to the Super Bowl) last year on a fluke, when a San Francisco kick returner had the ball stripped from his grip as he raced upfield, the ensuing fumble recovery leading to the New York Giants victory in the closing seconds. That was a bitter pill to swallow. But this year, the team was right back in the running. 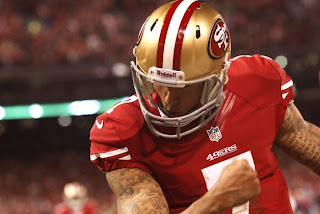 As readers of this blog will recall, I was never a fan of the 49ers quarterback Alex Smith. I've written several times about his failures, and my firm belief that he will never bring real success to the team. Last year, I was basically proved wrong, when Smith led the team to a 13-3 record, redeeming himself in the eyes of coaches and players and fans around the league. But life has a way of overturning expectations. This year, almost out of nowhere, the 49ers 2nd round draft pick, Colin Kaepernick, took over for an injured Smith in game #8, and never looked back. Kaepernick has been a revelation, with his power passing, and superior mobility and speed, going 6-2-1, and leading the team into the playoffs, defeating the Green Bay Packers and the Atlanta Falcons to get to the upcoming contest for all the marbles. Had this feat been achieved by Smith, I would (reluctantly) have admitted that he deserved our undiminished praise. But with the arrival of Kaepernick, this will be moot; Smith is obviously going to leave the team in the off-season, either as a free-agent, or through a trade (he is still under contract through next year).

The Niners are favored over the opposing team the Baltimore Ravens by 3 1/2 points, largely as a result of Kaepernick's extraordinary skills at running the quarterback option, in which he either hands off to Frank Gore, keeps the ball and runs, or throws a pass. His success with this maneuver--once a staple of traditional college teams, before the era of the "pocket passer" strategy of the modern NFL--has heralded a new era in quarterbacking, characterized by great mobility combined with an ability to make split-second decisions. There have been great mobile quarterbacks in the past, but the new style seems to be evolving out of the necessity to keep defenses from settling into classic zone configurations. Kaepernick's elusiveness and speed make catching him a difficult proposition, and with his rocket arm, the potential for his future as a passer seems almost unlimited. It's early days, for sure, but who knows what the kid will do?

Right now, we're in the Super Bowl, and the excitement is building. The media party has been in progress now for over a week, with many of the star players conducting interviews and generally basking in the glow of the notoriety that accompanies the nation's largest single sports event. Bourbon Street in New Orleans will be hopping again, as pre- and post-game celebrations get into full swing. 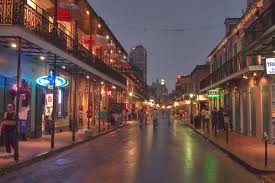 Bourbon Street in the rain
I've been to New Orleans, but never during Mardi Gras or Super Bowl. Rain in season (as above) can dampen sentiments, but bar-hopping isn't really an outdoor sport. I've even watched a game in the Super Dome, one in which our Steve Young and company dismantled the then pitiful Saints that day, 31-0. 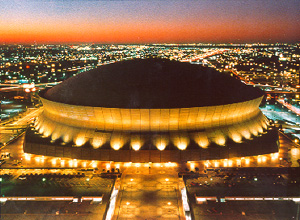 Eating and drinking in New Orleans is almost a way of living, a devotion to indulgence pure and simple. If you like seafood, rich sauces, and seductive cocktails, this is your oyster. So, in honor of the 49ers, who will be playing in their sixth Super Bowl to date, a toast! 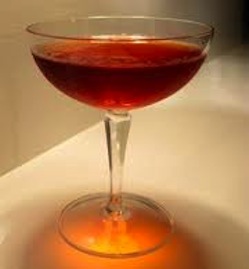 Recipe for the Delta Queen, if you please, with (as usual) the ingredients by proportion:

--garnish with lemon peel as desired. Shaken and served up in my preferred fashion.

The best book I know about the Mississippi riverboat culture is Mark Twain's Life on the Mississippi. It's been dramatized, and they made a much under-rated movie of it in 1980 featuring Robert Lansing in the Horace Bixby part. Twain, who grew up in Hannibal, Missouri, loved steamboating, and Life on the Mississippi is his paean to the dream of piloting a real paddle-wheeler. Today, tourists can book passage on big imitation paddle-wheel steamers plying their way up and down the river, but it's nothing like the 19th Century days when it represented the real commerce of the mid-way, and riverboat gamblers rubbed shoulders with rich planters and the fleecy ladies of the day. Gambling, and living well, and the national diversion. All our fun nowadays seems to be vicarious. But I'm not sure I'd really want to be in New Orleans for the Super Bowl, even with the home team playing in it. It's much more relaxing to watch it on television, in a tavern, or with friends in your living room. What's more, you can mix your own cocktails!

Posted by Curtis Faville at 5:43 AM