The question arises, what was the central theme of these pieces? The title, Wittgenstein's Door, was derived from a monograph on Ludwig Wittgenstein's Stonborough House (or Wittgenstein House) in Vienna, Austria. Designed by Paul Englemann, with the aid of Wittgenstein, who showed a great interest in the project and in Engelmann's plans, and poured himself into the project for over two years, focusing on windows, doors, door knobs, and radiators, demanding that every detail be exactly as he specified, to the point where everyone involved in the project was exhausted.

I was fascinated by this project because it united several of my interests in a single object: Language, language as philosophy, architecture and design, the psychology of spatial definition. Wittgenstein the man was known to be a classic eccentric, exploring different modes of behavior. But my concern was to position myself in relation to the meaning of his work--so Wittgenstein's house became for me both a symbol of that work, and an analogue for the eccentric designer and occupant himself. Wittgenstein's application of philosophical principles to architectural design was an external translation of meaning into material form. Could that application be a useful demonstration of the possibility of carrying out a personal program of formal innovation, or realization?

The title poem, Wittgenstein's House, is the setting for the title of the book, Wittgenstein's Door. The door was a metaphorical passage from one condition to another, one state of consciousness to a defined set of parameters. The door of the title is this entry into the house of a new kind of understanding, the passage a journey fraught with fascination and mystery and danger. Could a deeper self-knowledge accomplish anything more than a heightened sense of one's own mortality? 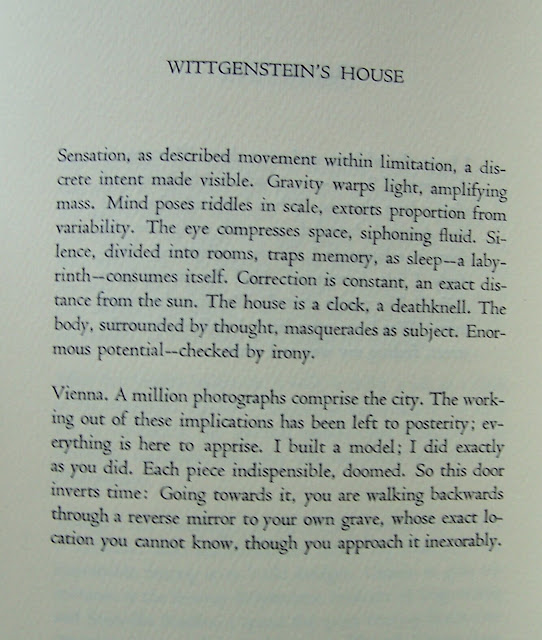 The riddle of existence had for me then a distinctly geometric implication. These prose poems would be about the delineation of an ulterior extension, in which words would be the building of a controlled shape, with the resulting confinement the consequence of the process. So, from the door to the room in the house, the trajectory of spatial progression, the house of language fit to suit the occupant. During this period, I had initiated an interest that would flower into the taking of a graduate degree in landscape architecture. 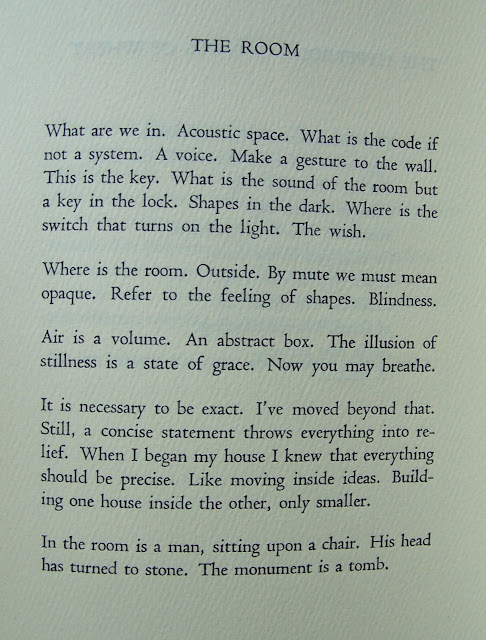 Later still, the experience of building a house would expand my understanding of the process of designing for oneself. Attempting to mediate between the architect's sense of who we were, what we wanted, and how that might be accommodated within the confines of a budget, was a mind-expanding experience--with the certainty that this would be our "last house" (in M.F.K. Fisher's phrase). "What are we in." In our bodies, our brains, our rooms, our houses. "Time is a room." Translucent, or opaque, large or small. 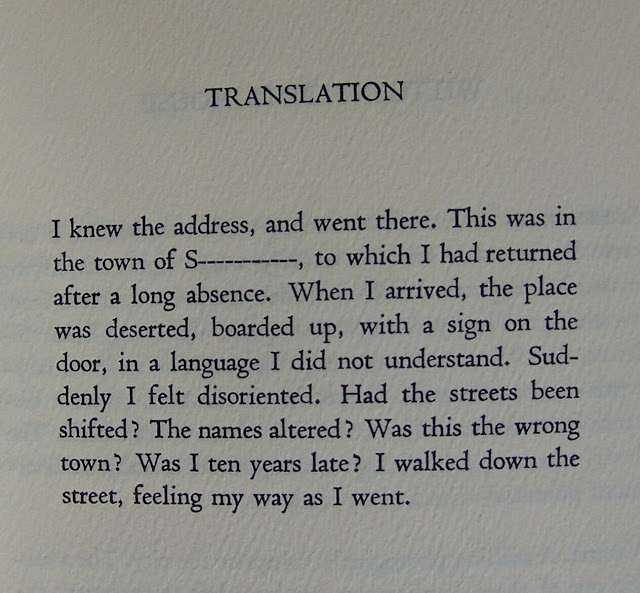 If my place in the world might be a structure, where might that ultimately be, in the ultimate grid of the universe? My sense of locus had always been wayward, a dislocation from any connection to ground, history, ancestry, tradition. This alienation bore all the hallmarks of a Kafka-esque disorientation, an exile to some Eastern Bloc urban nightmare--a weird dream obsession of wandering without maps or familiar signs--a Piranesian structure of confusing streets, wrong turns, disjunct intersections. Consciousness in a body gone awry.

History in the remnants of its residual artifacts. What evidence of our having existed, even, might be validated by the recorded events of past epochs? With the birth of photography, history took on an eerie verifiability, a confirmation of literal material presence of existence. How might the gothic truncation of the Victorian nightmare throw our difficult, stark present into relief? Persistent rays of light from around the edges of the door to the future penetrated backwards in time, illuminating objects, revealing closely guarded mysteries concealed under the veneer of fake histories. 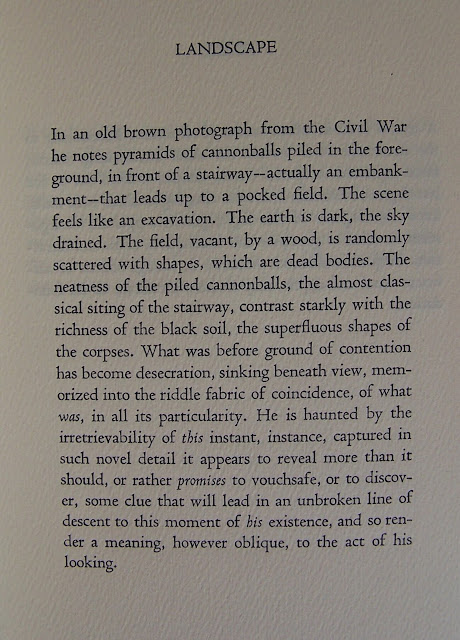 As confirmations of the dissolving present, I had once wanted poems to stand as bastions against impermanence, ephemerality, mediated obsolescence. Words were unstable things, slippery, wobbling, evanescent. How could they hold the immutable permanence of silver images? A glance at an early Middle English text could convince you of the mortality of the text in an instant. But photographs had an undeniable stopped presence. Images of the Civil War were like crime-scene snapshots, holding clues that language couldn't distort. If only they could be read. 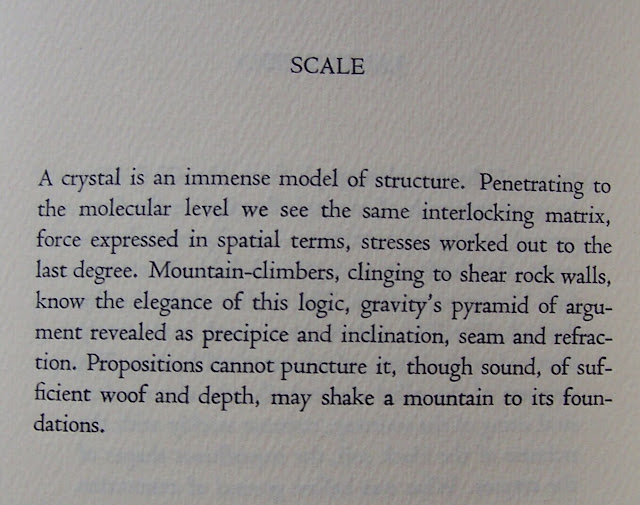 My contemporary reading had included a novel by a favorite author, Solo Faces, by James Salter. Salter, working for Hollywood as a screenwriter on the project Downhill Racer [1969], had been asked by that film's star, Robert Redford, to do a script for a knock-off based on a mountain climber. That failed effort led to the novel, published in 1979, just as I was beginning work on Wittgenstein's Door [1980]. Salter's description of scenes on mountain faces were harrowing. I saw in that desperate intensity a philosophical dimension that summoned all my intuitions of earth's power, the rumblings of change across the spectrum of difficult efforts to penetrate the complex densities of matter and meaning.

Initially, my readings had suggested to me that the Cold War antinomies were in some ways mirrored dilemmas. Artists and writers might find their inspirations in radically different contexts, rendering their sincerest efforts relative and even irrelevent. Frank O'Hara could appreciate Pasternak and Mayakovsky as exemplars of a new kind of enthusiasm, which transcended barriers constructed to divide and insulate. Global constructs seemed too big to grasp. On the mental stage, symbols vied for traction. At sunset, Monet's haystacks took on proletarian significance. 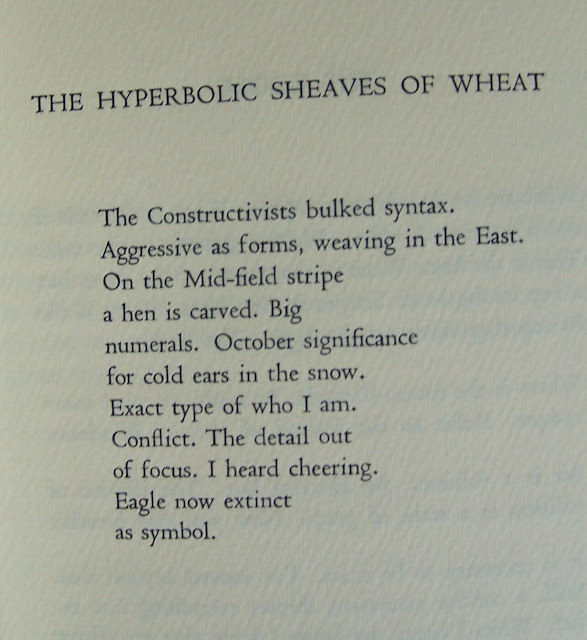 The ceremonial cannibalization of the goddess of plenty in a frigid day in the dead of winter made all such acts seem like the expression of a faceless bureaucracy, locked in the rigor mortis of fixed positions. Opponents wrapped in space-suits "galloping terribly against each others' bodies" looked like a perfect cartoon of the way we were.