This photograph was taken in the late 1980's at Point Lobos State Natural Reserve, just below Carmel along the California Coast. This is familiar terrain for landscape photographers, since the days when Edward Weston (and his son Brett) haunted it, beginning in the 1930's, looking for interesting natural subject matter. The Reserve is almost a shrine to Weston pére, whose images of it constitute one of the great loci, like Cezanne's Estaque, or  Cheever's fictional New England town St. Botolph's.

Coming back from Japan in 1986, I was anxious to pay my own humble homage to the place, and traveled there several times in the late 80's and early 90's. The area offers a number of specific kinds of views and textures, all of which Edward discovered. Odd rock formations, windblown cedars, cypress, pockets of tide-pool, blustery surf, undulating pools--all bathed in a changing light, sometimes bright and dazzling, other times overcast, moody with mist and fog. 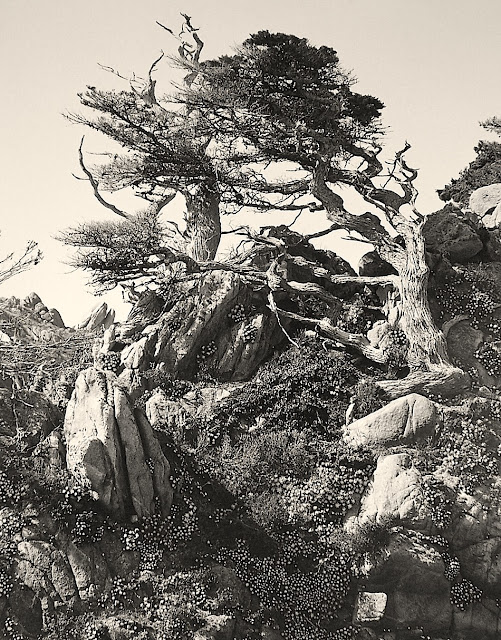 I had wanted to get closer to this little rocky bluff, but there was no closer vantage, and the Reserve's rangers don't like you to stray outside the narrow little pathways laid down for visitors. I had my 8x10, but my 480mm lens was the longest I had with me. In the end I had to crop about 60% of the negative away to make this composition, which I had formed in my mind's eye through the ground glass. Though it's quite clear, if I had had my 600mm it could have been a bit better. Clarity of image, as with quality of reproduction (print) are debatable characteristics. Wonderful images sometimes don't depend upon the exactitude or technical precision of the final image. A communicable content may not be "in the details." But clear seeing is equivalent to clarity of image, and very clear photographs are an ideal for which one must almost always strive. This is what I saw on the ground glass.

The great beauty of branches blown by wind over many years I've always found compelling. It seems to refer to a determination to survive, to bend without breaking, like the portrait of an old seafaring man with wild hair. In this picture, the arrangement of the rocks, wholly unplanned, seems to organize itself into a balanced composition, the counterpart of thrusts and lodged weights holding under the strains of gravity and settlement. There is a logic that dictates the positioning of everything in nature, neither man-made, nor man-related. To look at such phenomena in the natural world is to perceive the truth of a cosmic structure, which predates our witnessing of it, and tells an ancient story.

Someday, I'll need to get back to Pt. Lobos. It's calling to me, a summons I need to answer.
Posted by Curtis Faville at 11:04 AM

This is an awesome photo with so much beauty and meaning...thank you for sharing this.