That Was The Way It Was

In my continuous pursuit of the perfect bathroom book, I stumbled upon this new autobiographical excursion by the late James Laughlin [1914-1997], The Way It Wasn't [New York: New Directions, 2006]. The odd title seems to me to be a way of saying that the normal expectations one might have for the autobiography of the scion of a rich Pittsburgh steel fortune magnate, would be thwarted by what this book is. I've read that Laughlin had contemplated writing a straight prose autobiograpy, but perhaps didn't quite get around to it. He did, however, in his later years, scribble down anecdotes and memories of significant people and events from his life, and these now comprise the present volume of 341 pages (including index). Arranged alphabetically, it includes a wealth of reproductions of original candid photographs of people and book illustrations. 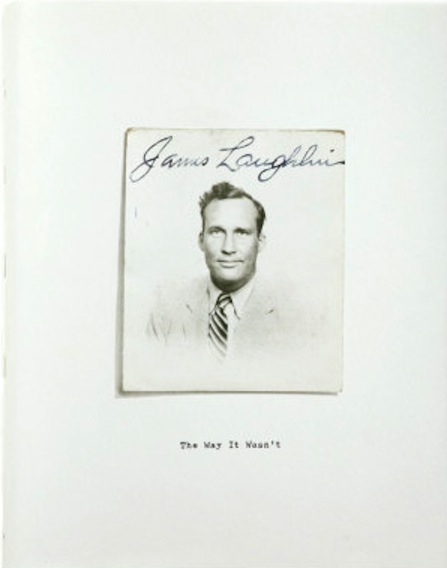 Born into a very wealthy family, Laughlin early on decided that he wanted to immerse himself in the literary life. In the middle of his Harvard undergraduate years, he took off for Europe to visit Gertrude Stein and Ezra Pound, and ended up living in Rapallo for a year, studying at the resident genius's "Ezraversity"--returning to complete his Harvard degree only when Pound suggested that since he wasn't destined to be a good poet, he should put his gifts to work in other ways. Upon graduation, young James was handed a present of $100,000 cash, part of which he used to start the New Directions publishing house. There has hardly ever been as fortuitous a turn of fate as this, at least for the cause of Modern Literature. (In the plastic arts, of course, there have been famous patrons throughout history.) The rest, as they say, is history, as ND went on to publish the work of Pound, William Carlos William, Henry Miller, Tennessee Williams, Dylan Thomas, Neruda, Patchen, George Oppen, Rexroth, Creeley, Levertov, Duncan, Thomas Merton, Snyder, Corso, Ferlinghetti, Paz, Hesse, John Hawkes, H.D., William Everson, Michael McClure, and others too numerous to name. In many sense of the words, New Directions was American Modernism. 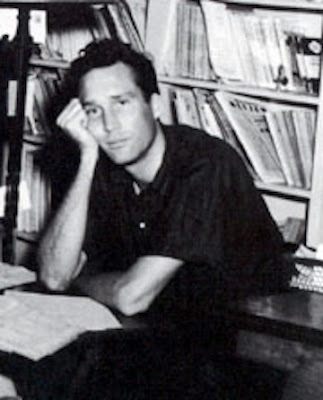 A patrician by nature, Laughlin had no qualms about living the kind of life his financial freedom allowed him to. He chased women, played golf and skied, and solicited manuscripts for his publishing firm. New Directions would not make a profit for at least a decade, but it didn't have to. The Laughlin fortune covered all its losses. James hobnobbed with his authors, frequenting his favorite watering holes, becoming one of the most worldly and cultivated men in the process. Delmore Schwartz, one of his early authors, demanded to know if he intended to be a publisher, and not a playboy. He wrote his own poetry, but knew enough about its worth not to promote it very hard. 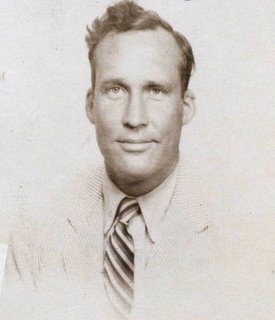 The "playboy" also had a mental problem, and apparently underwent regular psychiatric analysis, along with taking prescription meds, all his adult life. He could be abrasive, as people of means occasionally are, in print and in person. His personal wealth, along with his power over the printed word (as publisher), insulated him from the necessity of having to observe the usual kinds of courtesies which govern human intercourse. With Laughlin, you took the pleasant with the unpleasant, because you had no choice.

In my earlier pieces on Philip Johnson and Howard Hughes, I noted how personal wealth made possible, on the one hand, a serious career as a prima donna architect, and on the other, a dilitante's indulgence in aircraft design, a movie studio, and big-time tycoon real estate. These others also shared the rich man's wherewithal with sexual partners--in Johnson's case as a homosexual. All three of these as well suffered from various kinds of psychological disorders, perhaps exacerbated by their access to unlimited means. 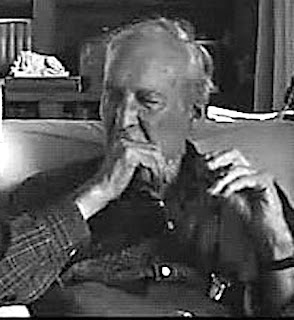 Laughlin in old age
The example of Laughlin seems to support the notion of the wisdom of private philanthropy. As I've come to believe over the years, public support of the arts carries the seeds of corruption. With a privately owned publishing venture like New Directions, the public bears no obligation for its support, and the editorial decisions are based on the taste and interests of a single individual, or perhaps a small cadre of like minds. Grove Press would be another example of a semi-major renegade publisher, intent on succeeding by promoting books and titles spurned by the Eastern publishing establishment. You may have to be a little bit loco to start your own publishing firm, but your chances of doing interesting projects are much greater than if you work for one of the large corporate firms. Of course, when Laughlin began, most of the major New York, Philadelphia, Boston and Chicago publishing firms were closely held concerns, but that's mostly changed now, with the wholesale consolidation and downsizing of publishing businesses we've seen over the last three decades.

The Way It Wasn't is full of charming reports, humorous stories, and naughty jokes, and I suspect is a lot more accurate as a record of the sort of fellow Laughlin must have been in person, than any "straight" autobiography would be. Interestingly, he cites the same kinds of pressures against traditional publishing in the 1960's, which we hear today. This, undated (probably from the early 1990's):

"Of course, you know the condition of the book trade is lamentable. The chains work on a quick-in, quick-out basis. I've heard that some of them are trying to be better about inventory but I haven't seen it with my own eyes. The days of the old Mom & Pop bookstore, people usually who were really interested in literature, are departing. Those couples didn't have the financing to float an extensive inventory. Since we are all, I'm told, going to be on the information super-highway, reading off our little screens with musical accompaniment of rock'n roll, it hardly matters."

There is, however, something truly heartening and perhaps unique about the young wide-eyed Harvard undergraduate traveling to Italy in 1934 (when he was only 20) to meet with and sit at the feet of America's most notorious expat, and deciding to utilize his family fortune to further the interests of the artistic avant garde. Would any enlightened person do that today? Perhaps, in the case of Douglas Messerli (Sun & Moon and Green Integer), or Dave Eggers (McSweeney's Quarterly Journal and books), or even Jack Shoemaker (and partners) (North Point Press, Counterpoint and Shoemaker/Hoard), they would. The possibility of an enlightened intelligentsia, devoted to the idea of a higher purpose than just the marketplace, and armed with independent wealth, is still alive and well in America.

We need unconventional and brave people (with money) to take chances like this. More power to them, and to the vagaries of wealth and a responsible upper class. Few of us can have the sort of life that wealth provides, but we can all benefit from the odd "traitor to his class" who makes impulsive gestures towards cultural entrepreneurism, or just plain takes crazy chances. In the future, as corporate publishing continues winding down, independent publishing may well become once again a small enterprise, the province of rich boys and inspired partnerships. Long may they prosper!
Posted by Curtis Faville at 11:34 AM

In the about the 1973 I sent him a manuscript

he sent it back with a letter (I have it around here somewhere) saying something-like : "my stable of writer is keeping me busy, but, I'd be interested in seeing your next book. You might try Swallow Press, they are interested in young poets"

just a bit late to send him that "next book"

print-out, say 50-100 copies, do an hand-drawn/crayoned cover and pass 'em around

I still would have sent his that ms....
as
I too knew people (who knew people who were and are-now 'famous' poets...

most of them too dead (and as you quote him) :
"it hardly matters."

He was quite sweet to me (gentle man) when I published Bricoleur (anthology, 1969) and asked for another copy to send to Ezra Pound whom he was sure would like it. He also wrote encouraging words about my own poetry. (Glad I never saw the 'abrasive' side you allude to).