We sit at the edge of something that is so vast that it is inconceivable. But we may be at or near its imaginative center--a vanity which has a seductive quality. 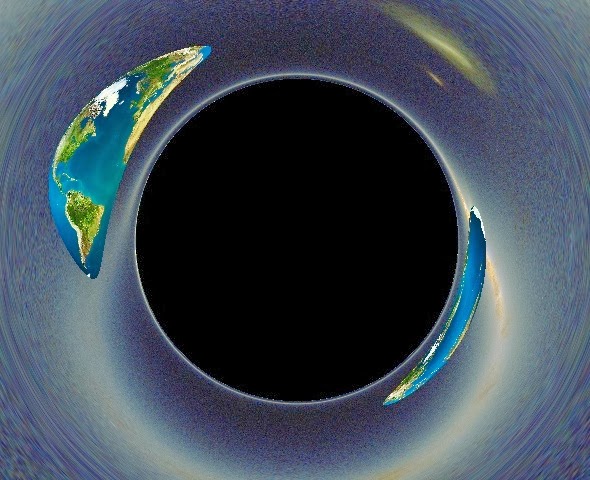 What is a thing?

Absolute Zero is a conceptual possibility, not yet achieved, in which there is no measurable energy being emitted from a substance. Where there is nothing--no matter--there is nothing to measure. Our minds evolved over time to facilitate interaction with the material world, and incidentally developed the capacity for independent symbolic speculation (or thought). Scientific experiment, and language--the tools by which we measure and gauge the speculative apprehension of phenomena--appear to be unique to our species.

In order to measure a condition, or effect, we must utilize material. In other words, our measure is matter itself, of which we and everything else animate, or inanimate is comprised. Can temperature be measured without the presence of matter? All matter is energy, and we've been told that all matter is, in effect, light. Matter is "arrested light"--or light that has partially congealed into substance.

All substance, then, contains energy. Even at a point very near absolute zero, in fact to within a billionth of a degree short of it, matter exhibits properties which suggest that it might cease to be matter, without any measurable energetic exhibition. Like infinite space, and anti-matter, the idea of absolute zero seems beyond our reach, perhaps because we're not given to apprehend it.

As material beings, we disport within the dimensions of our consciousness, and accept our limitations with joy or frustration. To be in anything, is to be contained, and all languages--verbal, visual, abstract--are attempts at limiting the terms of agreement in order to obtain sufficient specificity. But it may be that the universe is far too complex to be grasped with efficient systems.

Absolute Zero is one dilemma (a limit) which we can describe in the abstract, but science so far has been unable to produce an experimental perfection that would permit us to get our minds around it. We don't yet understand the full implication of what a pure emptiness might consist. To have an emptiness, one must postulate it within a containment, else it ceases to have any meaning. A sensible emptiness, then, is a toy of the mind, at least for the time being.

At the other end of the scale, it appears that entropy, that quality of the loss of energy, or the spontaneous depletion of measurable energy at a rate, actually decreases as matter reaches its maximum load of energy, a curious and paradoxical fact that runs counter to intuition.

Absolute Zero for me is a ravishing conception, one that titillates and provokes my imagination. Speculation swirls around it in my mind like a series of nested gyroscopes, so that I'm not sure of exactly where I am, or in what direction I'm moving. Stillness and movement may be simultaneous, in happy intersection, and emptiness may be hiding inside the fullness of the moment, surrounded by consciousness and the richness of the material world.

everything became abstract with and via the invention of the alphabet..... and the "murder" of the right brain....

try on for size:

Leonard Shlain's - THE ALPHABET VERSUS THE GODDESS

am just into/through his first 7 chapters.....

this sudden appearance of 'Absolute Zero'may prove to be more salubrious than you think: far from being a "toy of the mind" and condemned to the dark periphery of thought. It's sort of reminiscent (to me) of the incomprehensible wonder of pure speculative thought following its own playful instinct for "wonder". I'm glad to see this quality in your thinking

I'd say (perhaps after Pascal) it might be one possible road to a 'self-transcendence' of sorts. What always inevitably happens when the human mind considers the barren limitations of all abstract scientific thinking.

kookie what I
absolutely
found.....

http://www.youtube.com/watch?v=2QQuD62RxrU
and,
notice the sub-title of his book:
The Conflict Between Word ands

[ and, I am really discovering more and more of the "what of" that I was doing
via
Stone Girl E-pic -

unbeknownst or realized or consciously doing.

I prefer reading his book rather than listening to his lecture, however...

Google tells me I've been disinvited from even reading, much less commenting on, the curbfirsterblog. How's that for cold. Did anybody else get banned?

Zeno, for religious reasons (according to Nietzsche), did not believe either in time, distance, or movement, and thought that everything was the same thing.

This allows for unity at the price of all accuracy.

By the way, my blog went private. Should you or Craig or someone else wish to join, send me an email at kirbyolson2@gmail.com, and I shall enter you into the lists.