When I was growing up in the Bay Area in the 1950's, there was little or no regulatory control of air pollution in America. In those days, the route from Northern and Central California, Hiway 80, into the San Francisco Bay Region, via San Pablo Avenue, threaded through Vallejo, across the old Carquinez Strait Bridge, and the towns of Crockett, Rodeo, Hercules, San Pablo, Richmond,  Berkeley and Emeryville, before turning onto the Bay Bridge towards San Francisco. That was before Hiway 80 was extended across the inland hills and onto the tideland bay-fill flats of the eastern shore.

In those days, when the road led right through the midst of the Rodeo Refinery (now owned by Phillips 66) plant--an enormous forest of chemical towers, smokestacks and piping structures--the air quality in and around the plant was simply beyond belief. In those days, before the construction of the Richmond-San Rafael Bridge, transport between Richmond and the Marin Peninsula was by ferry, and the road to the Richmond Point Shore slip led right along the edge of the huge Chevron Petroleum Refinery, beneath the range of low hills where dozens of glowering cylindrical holding tanks were ranged. Driving through the Rodeo Refinery then was a daunting gauntlet, in which normal respiration was impossible. One drove at high speed, with car windows up, holding one's breath for as long as one could, to avoid inhaling the noxious, stinking fumes spewing from the countless stacks of smoking discharge.

Anyone living within a mile of these huge plants was at dangerous risk of a number of health problems, including extraordinary lung cancer rates. Beginning in the late 1950's, state and federal agencies initiated a number of regulatory curbs on the plants, and by the 1970's, there had been relatively significant improvements in the air quality at and around their immediate vicinity. The petroleum industry fought these initiatives at every turn, and the history of their compliance has been marked by repeated acts of open defiance, absorbing symbolic fines and penalties while routinely exceeding statutory limits on the amount and kind of pollution they release into the environment. 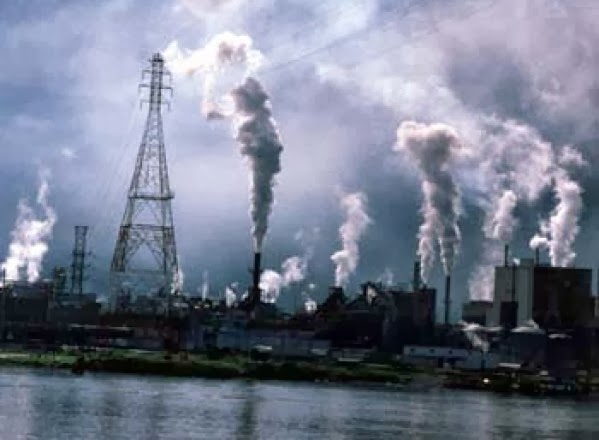 The effect of the refineries on Bay Area air quality is severe. Even at the markedly reduced levels we experience today--many times less blatant than they once were--populations living within their immediate geographical region can expect to suffer a number of serious health consequences. These effects occur year round, 365 days a year. Frequent "emergency" "accidents" occur on a regular basis, during which large releases of toxic substances blanket the surrounding urban and suburban precincts with foul-smelling chemical clouds which settle and linger in the landscape.

The Bay Area enjoys a marine aspect. That is, due to its proximity to ocean breezes and cooling fogs and general mild atmospheric turbulence, the worst effects of this ongoing pollution are not noticed, because they are literally shifted away. San Francisco and the Marin Headlands are notoriously windy places.

But during periods of stagnant air massing over the Bay basin, this natural sweeping action is suspended, and the sources of pollution become more concentrated. Pollution levels build up, and the  agencies (such as the Bay Area Air Quality Management District) tasked to look after the health of the environment and inhabitants of the region, issue warnings designed to allow people to avoid the worst aspects of air-born pollution, wherever they may reside. 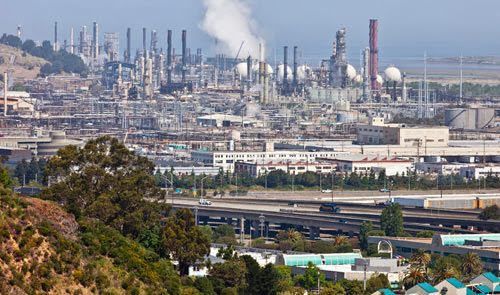 Over the last couple of weeks, due to a general warming trend in the Bay Area, we've been hearing a lot lately about the stagnant air mass, and have been alerted to what are called "Spare the Air Days"--with calls for less driving, less private combustion, and burning generally. People are being advised by the commercial network news programs' weather-persons to refrain from burning in their fire-places, and barbecuing, etc.

When stagnant air masses settle over the bay, the first thing you notice--if you're paying attention--is the unmistakable odor of burning oil. As residents of the East Bay Hills, we've become familiar with this smell, a phenomenon which occurs whenever breezes stall, or when the prevailing winds shift from the Northeast, to the East, or back towards the West, and the pollution is blown back across surrounding cities and residential neighborhoods. In other words, whenever stagnant air conditions persist, the population is once more reminded that the actual cause of our local pollution is the oil refineries. Wood burning hasn't been a significant source of pollution in the Bay Area for decades; most people heat their homes with natural gas or electric heaters, or with radiant heat from heated water circulation systems. The actual effect of wood-burning, as a contributor to local pollution, is negligible, in the larger scheme of total measurable pollution.

Why do we routinely hear these "warnings" about air quality, with reminders to "spare the air" by driving less and not lighting fires in our fire-places? There is no doubt that any moderation of the burning of fossil fuels is a good thing, and any reasonable excuse that discourages us from unnecessary use is probably a good thing too. I'm certainly not suggesting that people pretend that all sources of pollution--both essential and flagrantly irresponsible (and within our control)--should be ignored. Quite the contrary.

The petroleum corporations want to divert the public's attention away from the obvious fact of the continuing levels of pollution which they cause and produce. When stagnant air causes the petroleum refinery pollution to be noticed, the public is reminded again of the dangers in its midst, and the issue becomes a public relations problem for Chevron and Conoco Phillips. Dampening the public's perception of the continuing environmental crisis which these plants cause is crucial to the industry's attempts to control political sentiment, and keep down the costs of controlling the pollution they produce. (Anyone with ears and eyes has been reminded repeatedly of BP (British Petroleum)'s public media campaign to salvage its image following the gulf oil platform disaster. "We're just good people trying to do a good job, and you can rest assured that we will continue to provide cheap energy with a minimum of impacts on the environment." Right.)


Who are the media affiliates fooling? Do they think the residents of the Bay Area are so naive as to believe that wood burning is really a major source of our local pollution? Or that vehicular use, during the Christmas holidays, when more people are off the roads on vacation, not commuting in typical numbers, is the real cause of the air quality "crisis"? They must.

As a result of fracking, across the U.S., there are some who now predict that America will become "energy non-dependent" within a decade. We once might have regarded that development as a blessing. Fracking is a technology that has been known about for decades, but has not been "perfected"--made economically viable-- until recently. Unfortunately, the environmental hazards and devastation it brings will make large parts of our country essentially uninhabitable. What price are we willing to pay to achieve "cheap" energy. Of course, there is no such thing as "cheap" oil--there never was. The costs are hidden behind a public relations campaign to conceal both the short- and long-term effects of continued over-exploitation and consumption.

Our planet is a bank, and there is only so much treasure contained within it. If we spend imprudently, and use up our precious equity (resources) as if there were no tomorrow, there won't be a tomorrow--at least on the terms we dream of.

The first step in moderating our consumption of world resources is population control; need can overwhelm supply, no matter how conservative our approach to use. The second step is to husband the resources we have, so we don't use them up faster than necessary. The third involves research into less dangerous and dirty forms of energy, which don't harm the environment, and which aren't literally finite. Science may eventually make our present predicament look like child's-play, but we won't know that until and/or unless we get lucky and actually solve that problem.

In the meantime, we should stop letting ourselves be duped into believing that the undesirable side-effects of petroleum exploitation, purification and consumption aren't costing us dearly. Maybe we want to be told that everything is rosy. Maybe we like not being reminded of the poison in our midst. People can be very immature, especially when they lie in a pleasantly reassuring media bath. Wake me up when the crisis is over. The world is getting better. Eventually we'll solve this problem. In the meantime, don't bother me. Is that some guy barbecuing steaks on his grill, or is Conoco-Phillips spewing a little more shit into the atmosphere this evening? Don't depend on the local weathermen to tell you. If we were routinely kept informed about the real dangers and harm the refineries are continuing to cause, we might not be so forgiving.
Posted by Curtis Faville at 7:01 AM

I'm sympathetic to much of your concerns here. I just wonder if there's a bit of an inconsistency between your unfavourable views on cycling as an alternative to commuting and the need, as you say, to control the "shit" Conoco-Phillips pumps into our air,

I take your point.

My problem with cycling is not its favorable aspects, which may have a small positive effect on overall fossil fuel consumption, but the manner in which it's being done.

Most biking done in and around this area is recreational, practiced either by serious biking sport nuts, or by people who simply can't afford to own or operate a car.

In parts of the world where biking is a necessity instead of a luxury (or a pastime), major problems result.

My diatribe against urban biking stands. Bikes should be banned from major urban downtowns, where they're neither convenient nor efficient, and cause a lot of needless congestion.

My point here is not that biking is an antidote to auto emissions, but that the real culprit is the petroleum industry (refineries). Not bikes.

And that our media has been bought off by special interests who want clearance to pollute and foul our environment without restrictions, and see public relations as a tool in manipulation of political aims.

curtis, this is a problem ive been thinking about a lot so i have a serious question. the spare the air people claim the big health problem is fine particles in the air, and that 33% of that, the largest portion, is specifically wood smoke. this doesnt seem obvious. could you reference the science behind your argument? i really want to know how they come up with this. thanks

the EPA and state governments is clamping down on wood stoves..... starting in 2015

not to worry about that wood-smoke that drifts up from Saw-So-Leat-OH and Richmond to Portland...
more regulations will "save the day"

In 1967 I moved in with friends in Richmond... almost choked to death on the black smoke.... was soon as my cashiers check cleared... I left Ca... haven't been back since ... I don't even wonder if I've missed anything ...

the refineries in California have polluted the entire west coast... best thing that they can do is raise taxes on wood-stoves, switch to coal-fires, incinerate the chicken-shit and burn poison ivy...