Occasionally, in the book world, you encounter an author, or an artist, who knocks your socks off, whom you've never heard of. You can live with books for 100 years, and there's always someone you haven't yet discovered, whose efforts bear the mark of genius, but who for one reason or another, has eluded your prying curious eye.

My knowledge of the history of modern American painting leaves a lot to be desired, but some of the blank spots are filling in. Irving A. Block was an aspiring canvas/mural painter in the 1930's, who eventually would go on to work in Hollywood, contributing variously as a writer, producer and special effects designer on such films as Forbidden Planet [MGM, 1956], and The 30 Foot Bride of Candy Rock [Columbia, 1959]. Some of his early paintings can be viewed on his daughter Francesca Lia Block's website here.

I stumbled on this precious little letterpress book a while back, and realized that it was one of only 15 special hand-colored copies. As the colophon states, this edition was limited to 265 copies, published as number eight in the California Masters Series published by Santa Susana Press, California State University, Northridge, in 1989. The author of the poems is Jill Block, the wife (widow) of Irving, herself a poet. Letterpress printing is an old art, kept alive today primarily by small craftsmen laboring in relative obscurity, usually on shoestring budgets, connected to institutions or struggling along doing livres d'artistes or vanity projects. The process and the materials are too labor-intensive and expensive, in our age of technological automation, for general publishing jobs. Their projects are labors of love and devotion to a craft, which makes the kind of products they produce as unusual and prized as they have ever been. 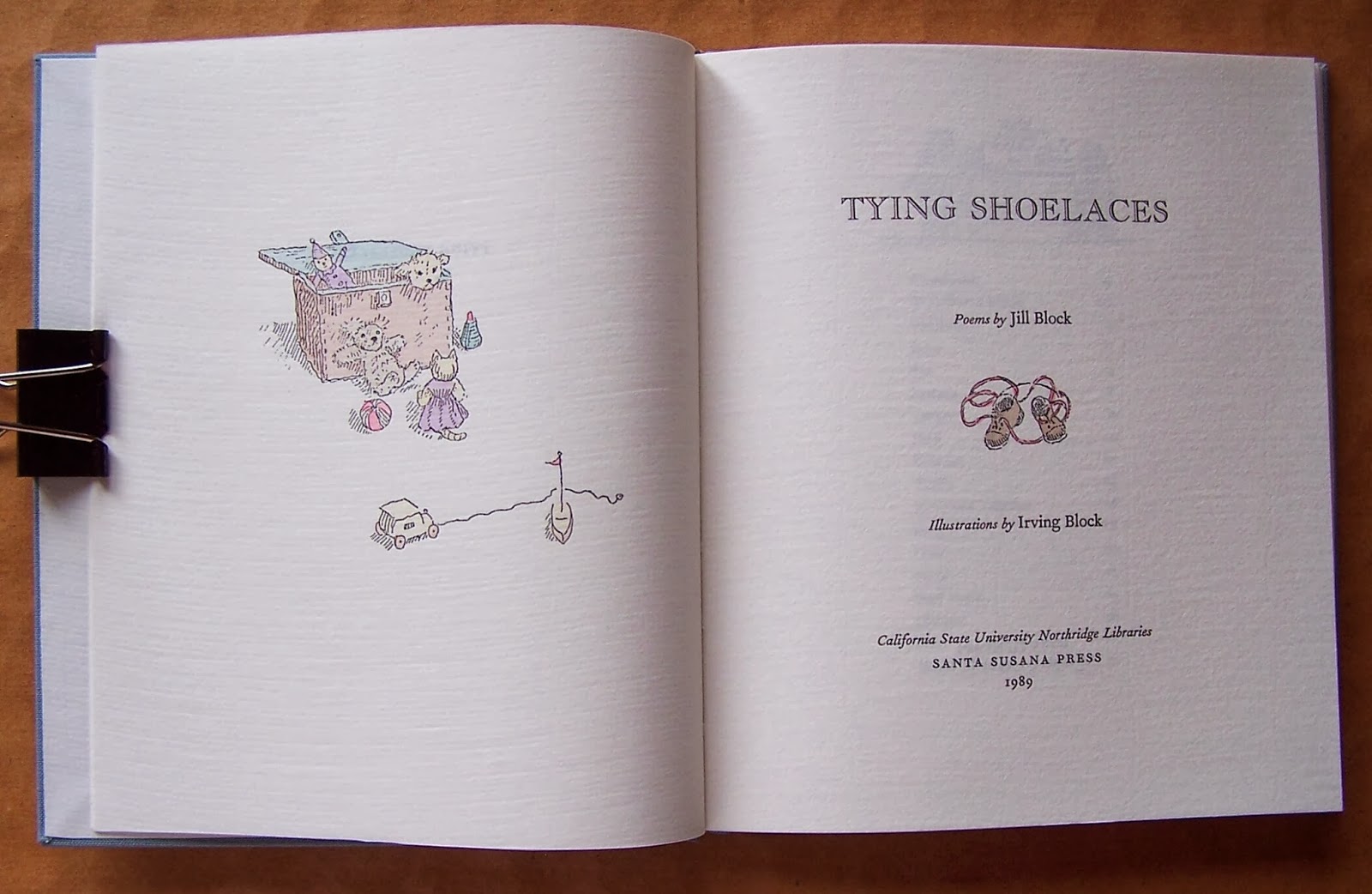 Juvenile or naive illustration is a whole special department of book art. I've commented before on this blog about the work of Beatrix Potter, Virginia Lee Burton, and E.B. White (whose classic Stuart Little was illustrated by Garth Williams), J.R.R. Tolkien (some of whose work was illustrated by Tolkien himself). There are dozens of different kinds of styles. Bemelmans, Gorey, Theodor Geisel, Maurice Sendak. The list would go on and on. 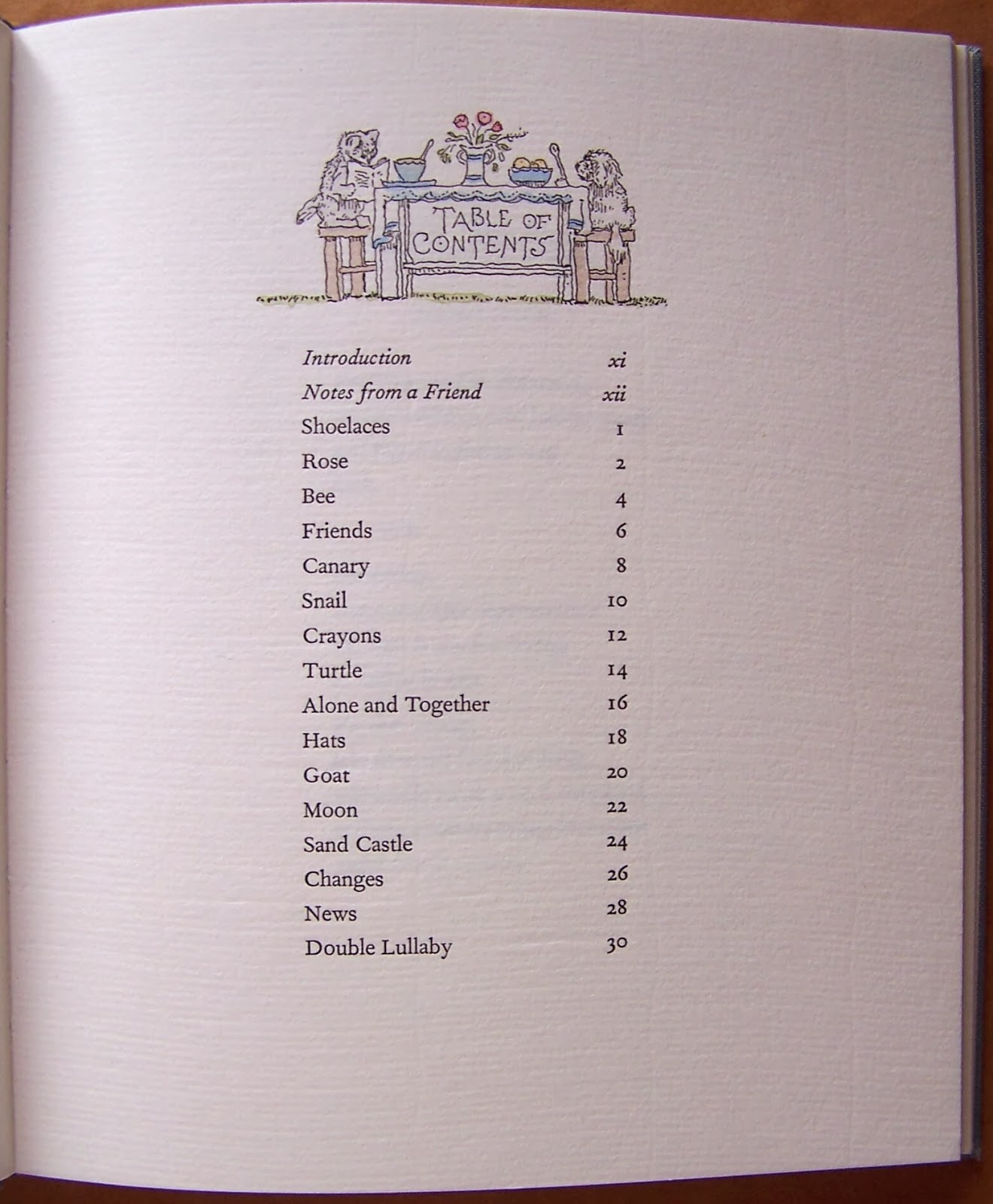 But when I discovered this item, I'd never even encountered the name. Block worked in different genres, but the illustrations here seem perfectly suited to the text and feeling of the dimensions of the book itself. They're line drawings, which depend initially on the clarity and precision of of the representation, but the delicate pale pastel color wash makes them seem more fragile and delicate. 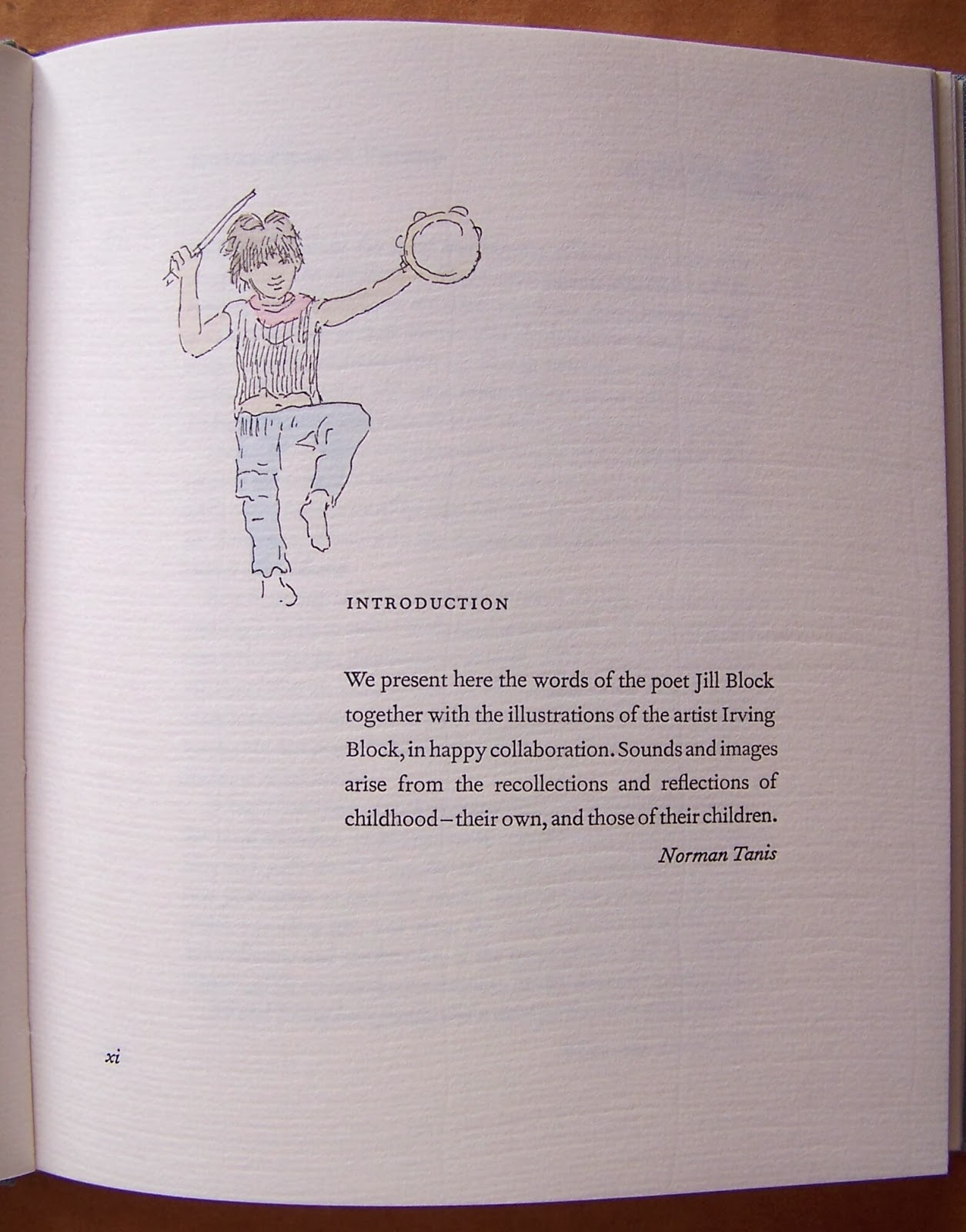 The writing and publication of Tying Shoelaces appears to have been truly a family affair, which grew out of the life and energy of both parents, as collaborators and companions.

Husband and wife collaborations in the arts are rare. Think of the Eames, of Robert Venturi and Denise Scott Brown. Collaboration, in fact, is a difficult process. 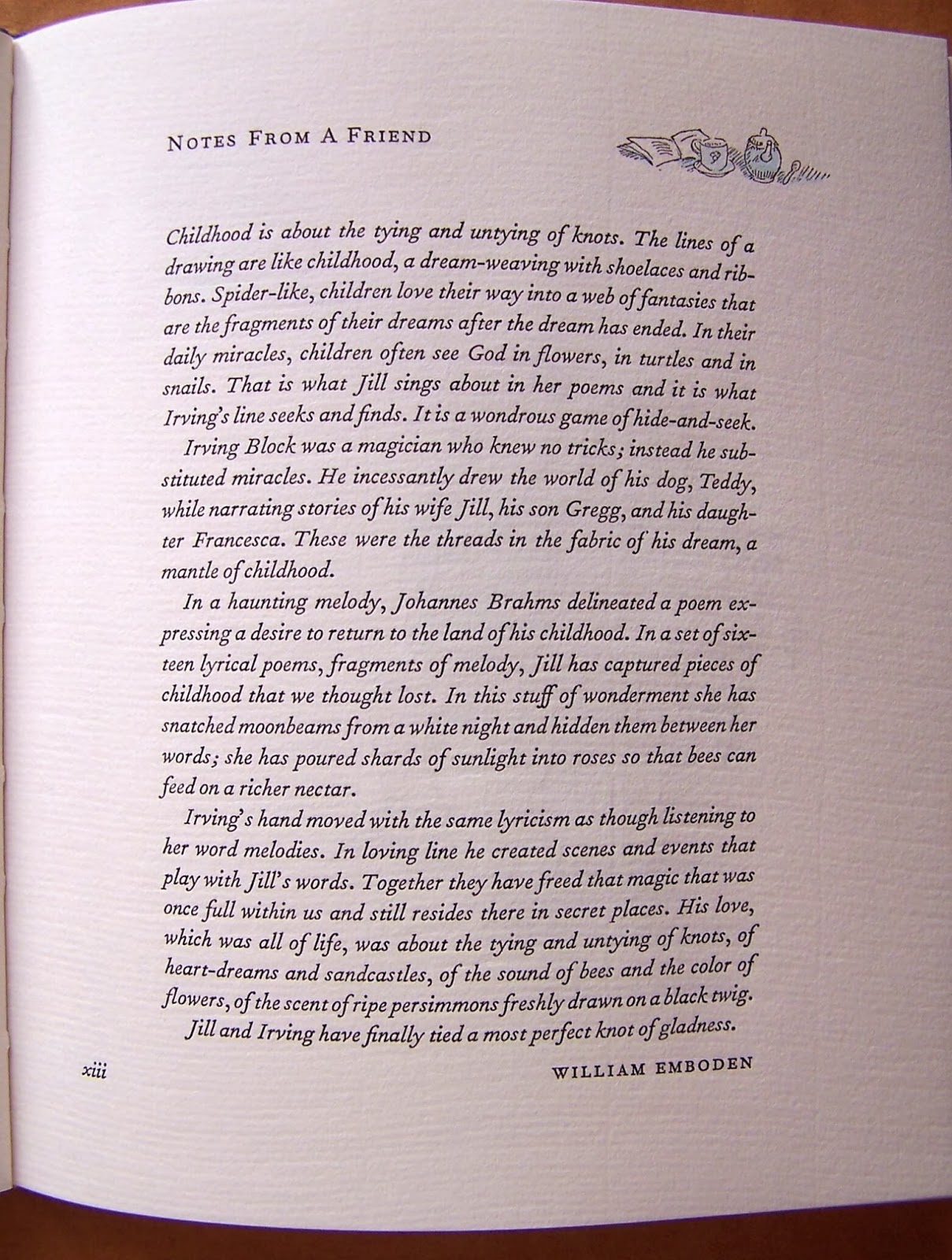 Childrens book illustration can end up being too crude, or too precious. The problem lies in avoiding the natural condescension of talking down to your audience, not being too pedagogical. Ultimately, the problem involves approaching subject-matter in a manner that is as direct and inquiring as innocence itself. 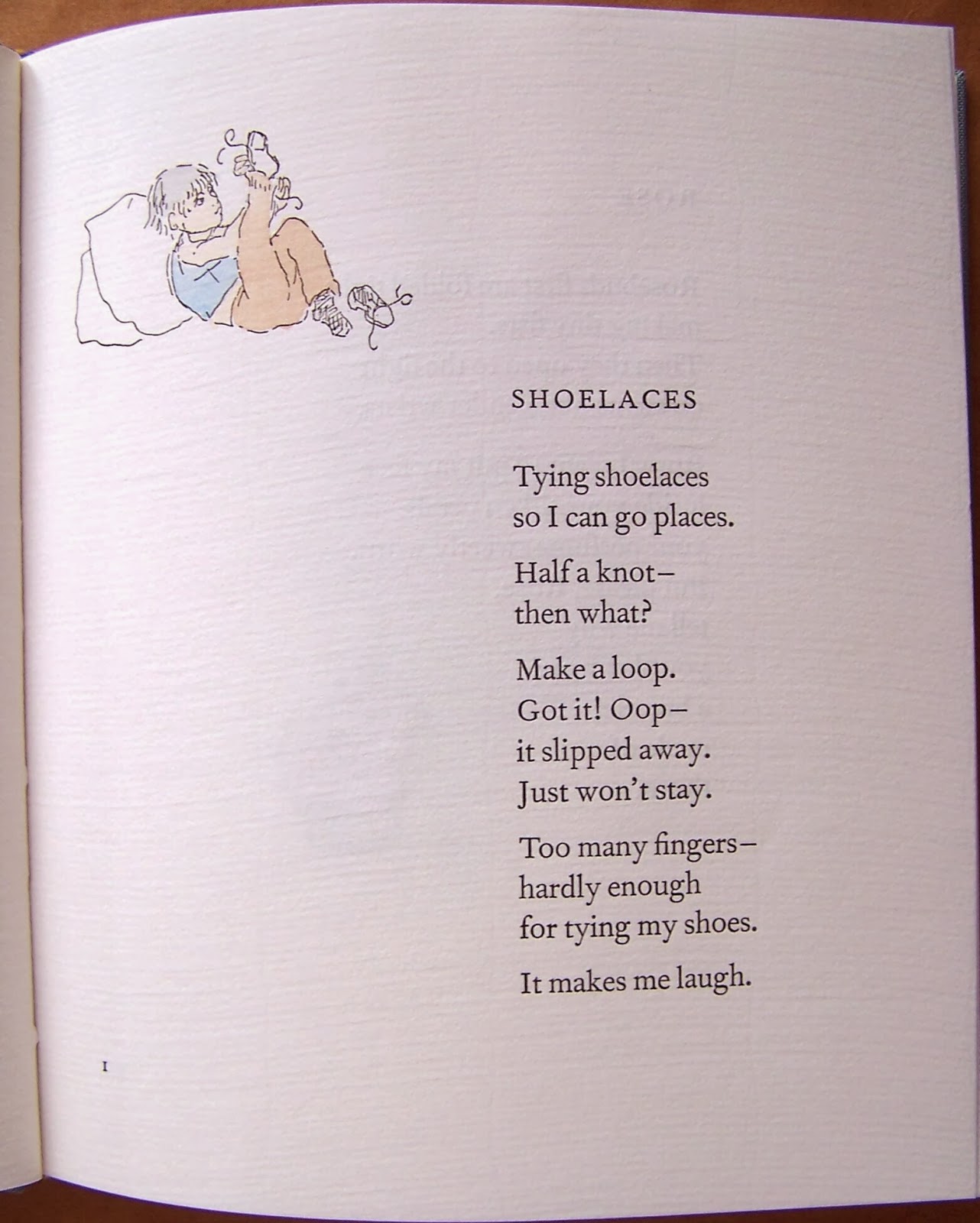 Generally speaking, I'm not a fan of children's verse, or even light verse. Rhyme tends to lull me to distraction, it tinkles and hops, clangs and thumps along, and seems intended to remind me continually of how inevitably dull life is. Hickory-dickory-dock. The little pink Energizer Bunny. How cute can we be? But it can be done well, and when it is, it's a small miracle. In another blog, I discussed Tennessee Williams's poem For Carson McCullers. How to make a poem sound sweet and simple, without seeming to be too precious or patronizing. He was like the S.J. Perelman of light verse. 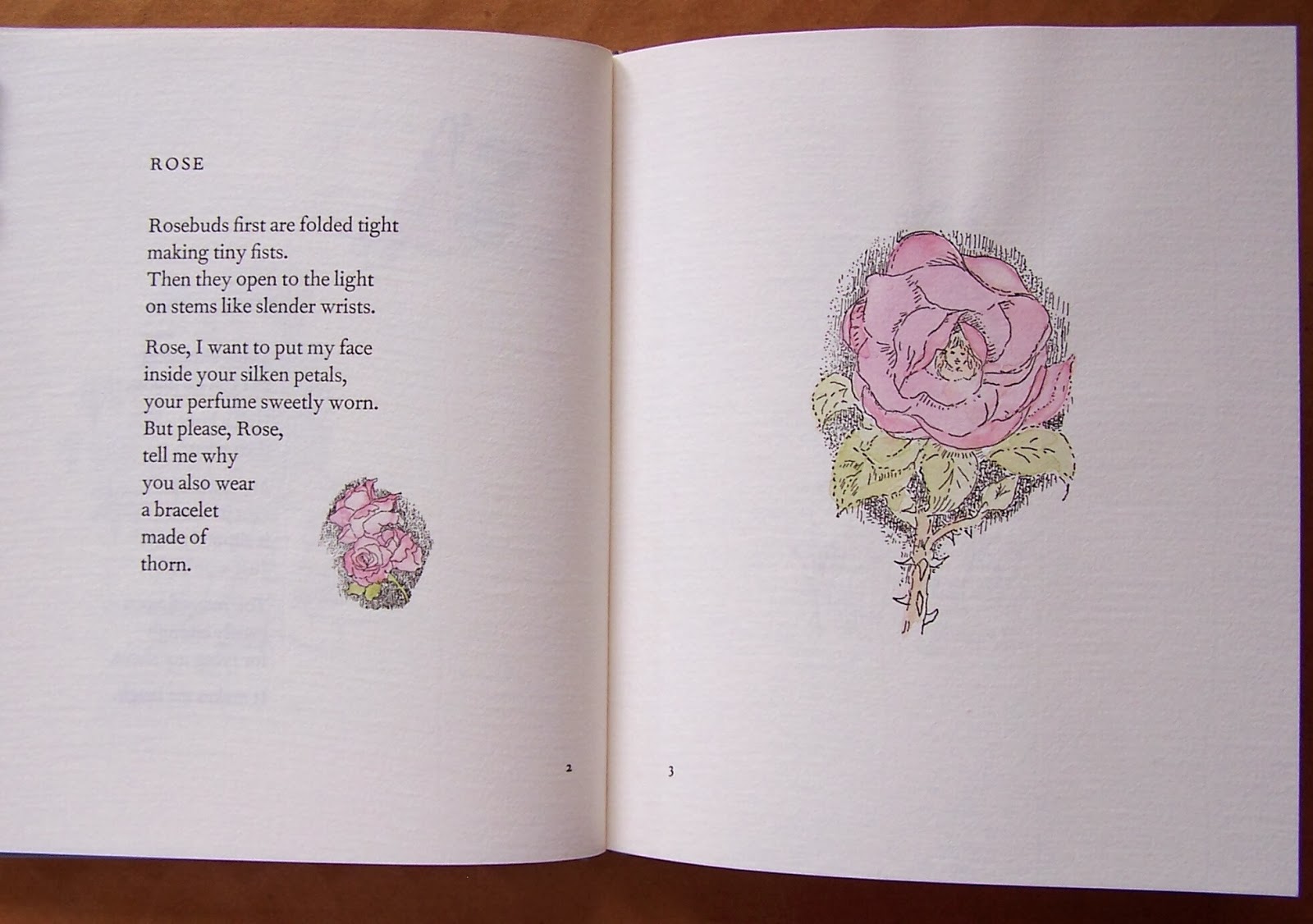 Ogden Nash perfected the nonsense rhyme, stretching it and tweaking it into preposterous shapes and attitudes. A little of that goes a very long way. The poem below is both a poetic description, and a witty little concrete poem at the same time. 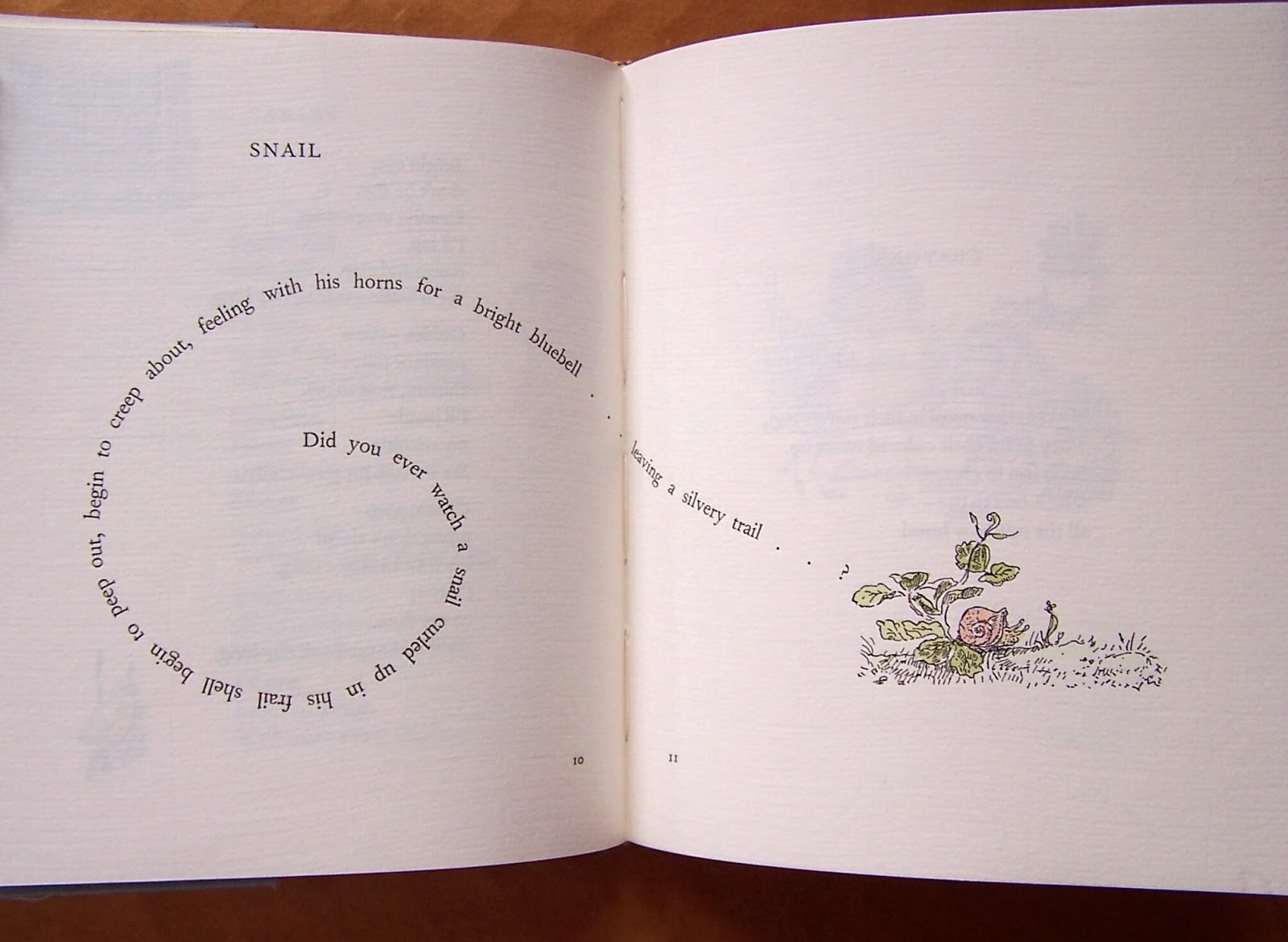 Childrens books that address the subject of death, or suffering, or deprivation, usually fail. Here's one, about the death of a pet, that just manages not to sound too sad, but is quietly grave. 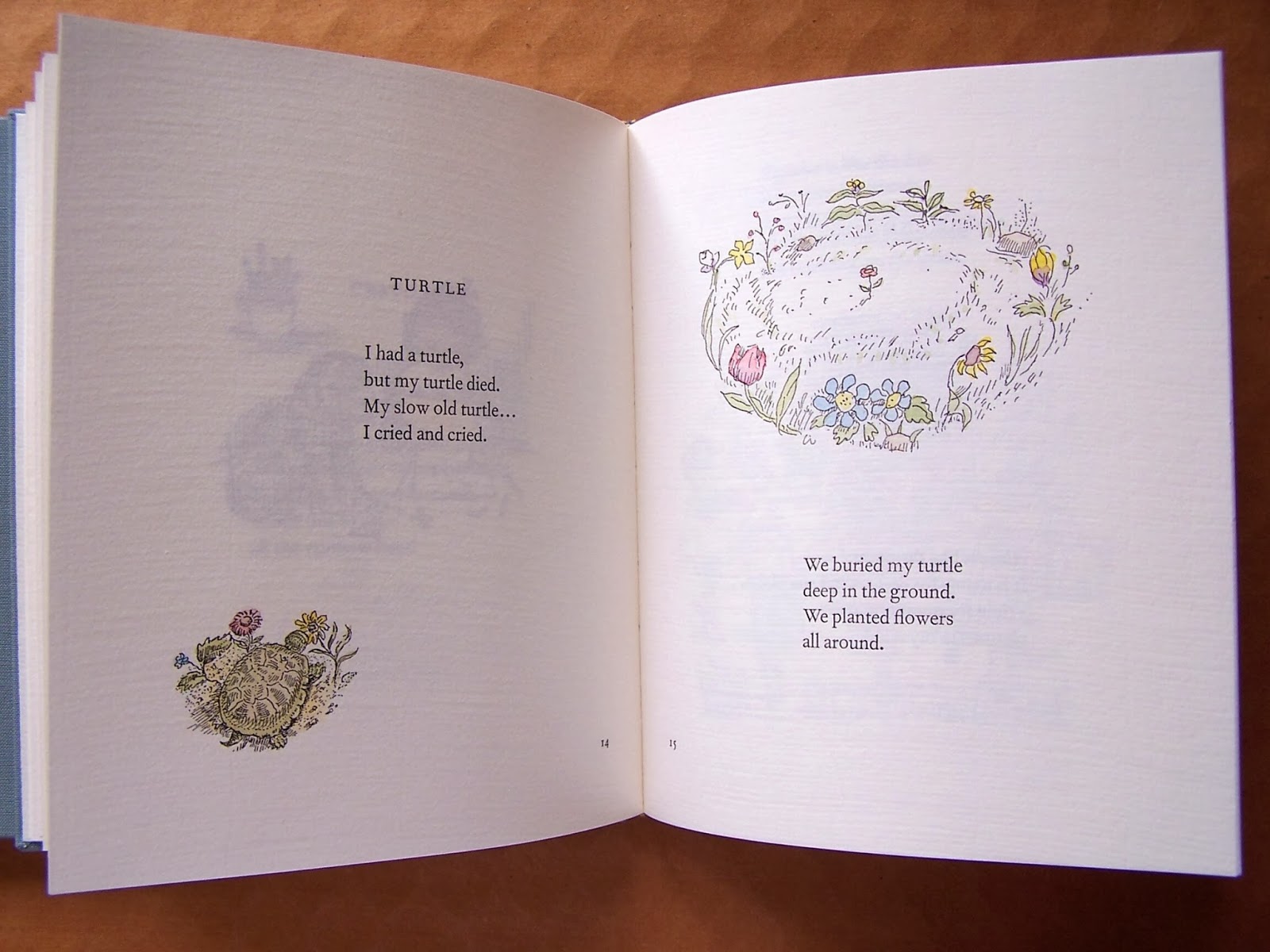 It's amazing how various Irving A. Block's artistic career was. Read an interview with him here, for an interesting skip down memory lane.  There's a lot of stuff about the WPA, and some of Block's contemporaries who later became famous. 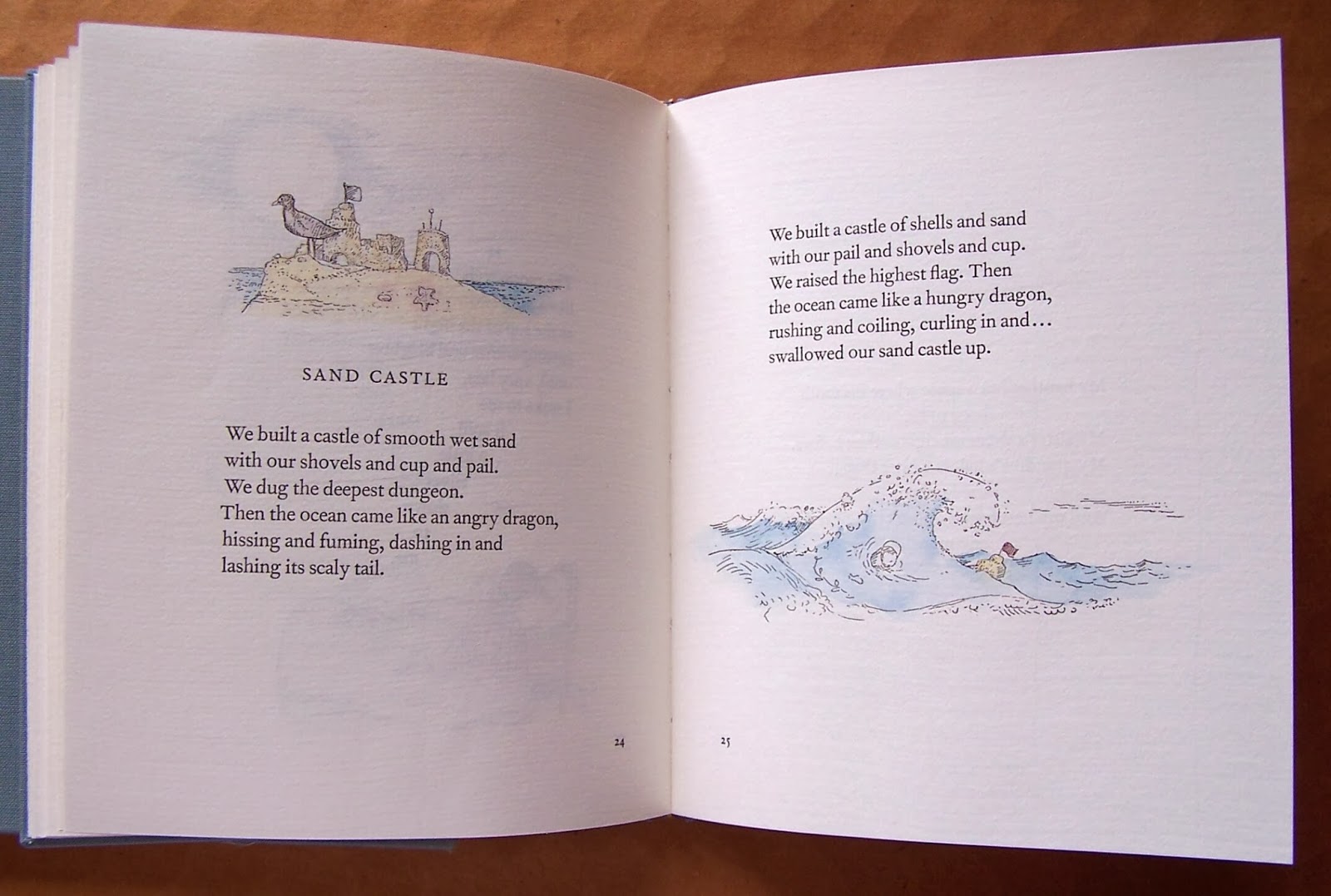 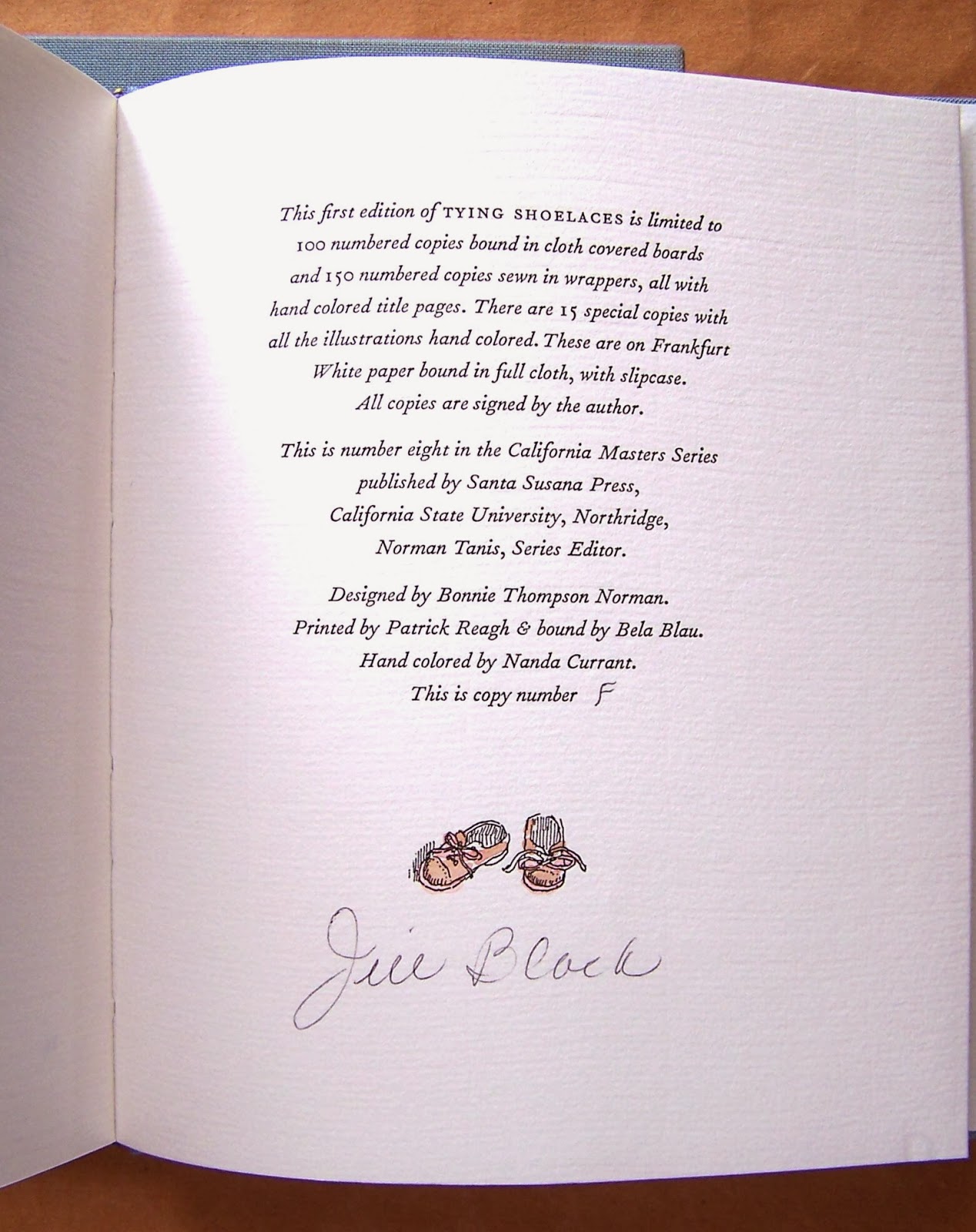 I love this book sooooooo much! Do you know where I can buy one? THX!

There's a copy being offered for sale presently by Wickham Books South in Naples Florida for $90.

You can find this listing on Abebooks.com.

It seem to be a Very nice book ! thanks a lot for sharing this ;)