Mocha was a quixotic figure in our household.

When we first brought him home, he was just a fuzzy little white kitten, whose Siamese points hadn't begun to darken. He'd had a difficult birth--the runt of the litter of a Stockton breeder--and he'd had to be given supplemental bottle feeding before we could take possession. He was thin, and had an oddly large tail, which rode forward over his back. It looked a little silly.

But we soon grew to love Mocha, who developed into a real personality. His parents, appropriately named Sadie, and Big Kahoona, gave him a mixed genetic make-up. Though his paws were unusually large, and his tail was thick and dark, and his head was wide with a "bull's" ruff around the neck and shoulders, his body was otherwise thin and sleek, and his white fur, which stayed white all his life, was smooth and silk-like. He eventually developed an aversion to liquids (particularly water), which led from time to time to periods of dehydration and a reluctance to eat. During these periods, we'd have to dropper him with water, to jumpstart his hunger reflex.

Personality-wise, Mocha tended to be a little squirrelly. He seldom wanted to be picked up or held, but would often choose to sleep on a handy lap, as long as you didn't move around much. With our other cats, he was a good playmate, but if he lost his temper, you had to be careful with him: Once his feral instincts kicked in, he could be dangerous. But usually his gruffness masked fake courage; he would back off if faced with superior force. There was something of Don Quixote in him--he often believed he was a great menacing tiger of a cat, much as his father Big Kahoona was. But Mocha wasn't a big bruiser, so the dominant nature seemed a little absurd in him. Despite his dreams of glory, he was really a little pussy-cat most of the time. 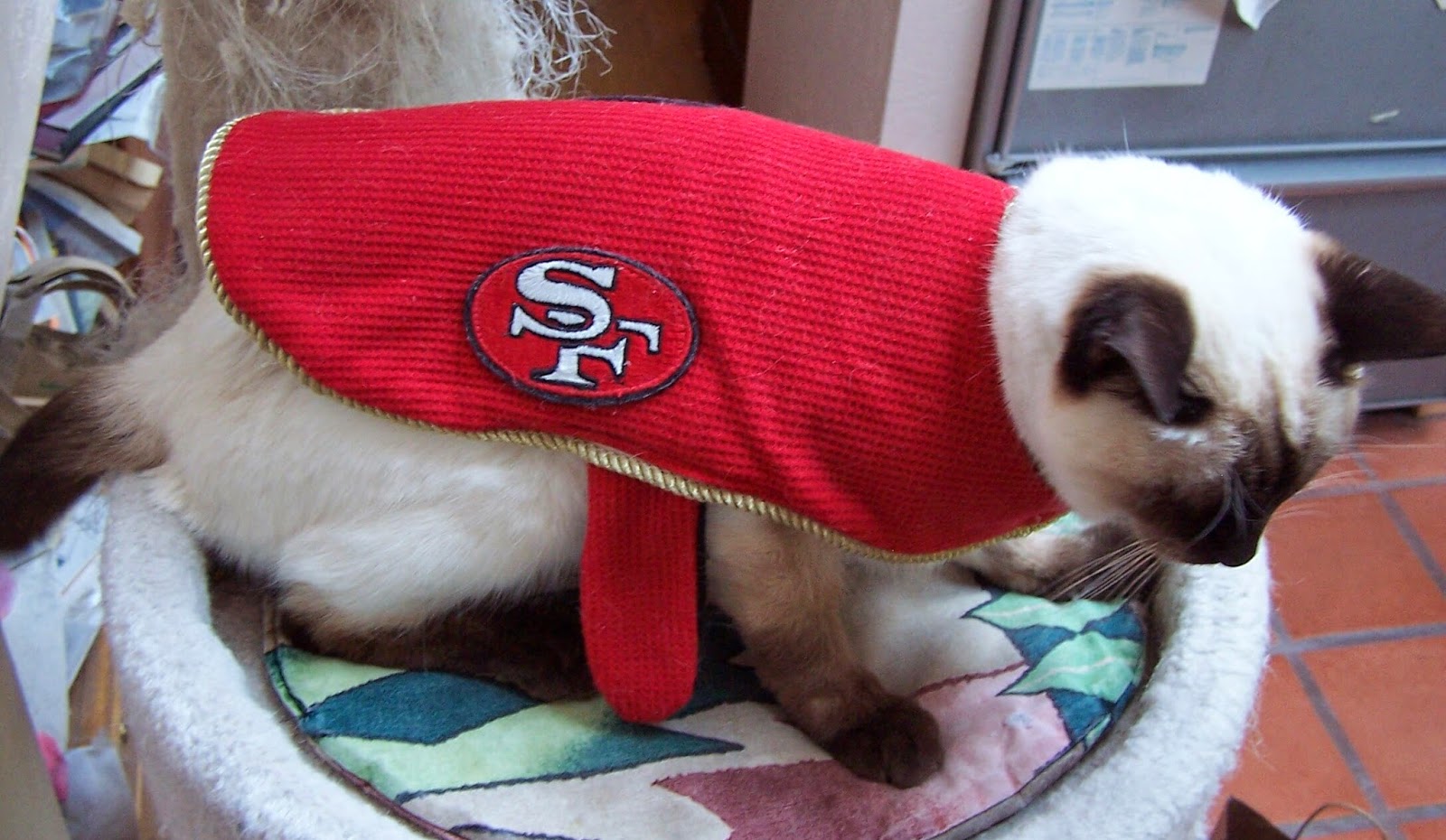 When he was still not fully grown, I got the idea to have a San Francisco 49er blanket made for him. Cats usually don't like things put on them, though occasionally I have seen little jackets on domestic cats when they're outside, to keep them warm. Cats don't usually tolerate collars well either. Anyway, it took a couple of months to have this article made, and by that time, Mocha had grown about 20% larger, so he never was able to wear it.

Mocha had a good heart, and a kind of presence that is hard to define. Perhaps it was his wildness. Domestic cats are mixtures of wild and tame, with one or another tendency stronger from time to time. Even when Mocha was at his most docile, there was a kind of power held in check in his nature, which made him seem stronger. Certainly he believed this, even if he seldom showed it overtly. His pride was his most nobel characteristic, even though it had this quixotic aspect. "I'm one tough hombre," he seemed to be saying, even if the claim wasn't always convincing.

One of his little "demonstrations" of his prowess was, when running down from upstairs, at the turn of the landing, to bounce up off the wall and ricochet back down the next flight of steps. He usually did this when feeling enthusiastic, when being chased, or just out of an excess of high spirit.

Mocha didn't talk much, but when he did it was usually for something important. He was actually very territorial. As an indoor cat, he was attuned to outdoor noises, and would often feel that order needed to be restored, if he heard an animal or suspicious sound. He would rise up and pace deliberately around the room, emitting a low-pitched snarl or moan, as if to say "What the heck is going on out there? I'm not going to tolerate this disturbance in my area!"

In his birth litter, he tended to feel like an outsider, and I suppose that was true of him all his life. He would sleep and play with his companions in the house, but he never gave his full trust and loyalty either to us, or to the other cats. I thought of Mocha--or, as I called him alternately from time to time, Mochee, or Moch-er, or Moch-us, or just Moch'--as my alter-ego, a fundamentally ordinary guy who liked to fantasize about being a knight in shining armor, or the sexy boss-chief of the tribe.

In the last few months, he'd grown more and more reluctant to eat, despite our efforts to re-hydrate him and offer the most enticing of treats, and last month a visit to the local vet revealed that his kidneys were failing, and that nothing could be done to save him. As we had with our previous casualties Lottie, and Coco, we decided to let him die at home. His decline was fairly rapid, and he died in his sleep yesterday afternoon. The photograph above, taken just a week before he died, is an inadequate likeness of the quirky little guy we lived with for 14 years.

I will miss his beautiful dark thick tale, carried high like a flag of joy or insouciance as he trotted around the house. I will miss his deep, mysterious eyes which seemed like windows to an ancient blood-line of hunters. I will miss his softness, and mischievous elusiveness when he wouldn't allow himself to be caught. I will miss his independence, and the wonderful gift of his friendship when he did choose to settle on my lap, or to chase a string across our big California King bedspread, or to fiddle with my pencil as he hid behind the Apple computer-screen at my work desk in the dining room. I will miss him. I will miss him a lot.

As a result of overwhelming requests, I am posting an additional photo of Mocha--this one taken approximately six months ago. Note the "Lone Ranger" face-mask appearance. RIP 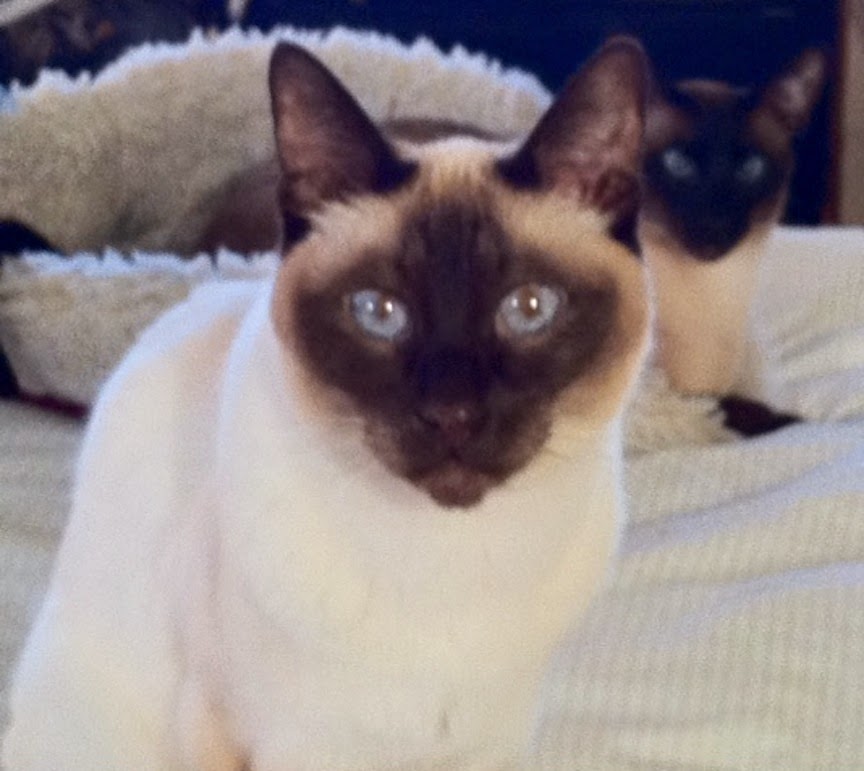 Posted by Curtis Faville at 9:20 AM

Curtis, So sorry for your loss of such a wonderful companion/friend. Mocha sounds very special. We once had a lovely cocker spaniel also named Mocha. Our pets are so much a part of our lives.

I read this with tears rolling down my cheeks...