Minimalism XVII: Huth's Out of Character 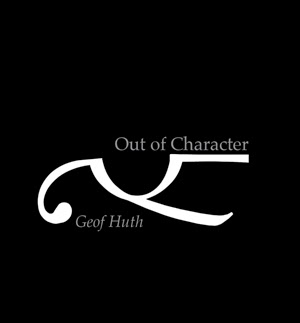 I've been meaning to discuss Geof Huth's work for some time, and I finally got around to it when I came upon the cache of things Geof sent me a couple of years back, which included a copy of Out of Character [Lancaster, Pennsylvania: Paper Kite Press, 2007].

Huth is what is known as a VisPo artist/poet. Visual Poetry explores, at least on one level, aspects of language as visual representation, hovering unsteadily between language as symbol/signage, and letters as designs in space. Our western alphabet is not pictographic, but nevertheless may be perceived to have qualities which are visually expressive. An alpha-bet of 26 letters may seem to have a relatively limited range of potential graphic possibilities, but Huth nevertheless sees in them rich combinations which he exploits through free arrangement, juxtaposition or interlockings/superimpositions of whole letters or fragments of letter bodies.

Our Western Alpha-Bet is just one possible letter series. There have been others, such as Egyptian hierglyphic--

It doesn't take much imagination to see how purely symbolic pictographic imagery like this could morph over time into more abstract shapes, which can lose their original visual identity to a more "short-"handed notation. I won't go into the history of the Latin Alpha-Bet, either in its written or print versions. The important things to note are that it (1) is what we've inherited as the descendants of ancestral usage, and (2) that the evolution of letters has involved a combination of applied utility and creative invention. Wikipedia has a fair discussion of alphabets.

As artists, poets may accept without comment the given structure of their linguistic inheritance. Most poets don't consider themselves to be visual artists, preferring to think about and use language as a convenience for the communication of content, depending upon the resources of rhythm and rhyme which have come down to us in the traditions of verse and rhetoric. There's nothing wrong with these traditions, and I have no doubt they will continue to inspire poets and writers for centuries to come.

Huth has been drawn to the visual, I suspect, in the same way that abstract artists are drawn to explore the technical aspects of pure art representation, except that his interest opens into the additional dimension of alphabetical meaning, and the whole history of what pictographic shape itself can summon in our memory of, and response to, certain kinds of visible structures of representation.

Our responses to such experiments may occur along a wide range of possible meanings. We may see such works as a kind of play, as a rearrangement of a given set of token pieces, as a conflict or struggle between existing nominatives, as symbolic hieratic warnings, signposts, pointers, or as comic satires or parodies of haunting familiars, etc. What seems clear is that the invention of such two-dimensional spatial structures probably begins in intuitive conjecture, or casual play, and proceeds to discoveries and conundra which oscillate with the hum of mystery and delightful riddle.

If such experiments "work" they probably do so because the suggestiveness of their structure connotes strong echoes of visual suggestiveness, which may seem odd or contradictory, or inevitable.

Out of Character is a small pamphlet, a perfect 4"x4"dimension, with 25 works, each with an elaborate title (in the table of contents). I think I would have preferred a slightly larger dimension, so the printed portion of each page didn't end up in the gutter, which necessitates over-stressing the binding to see each whole page. 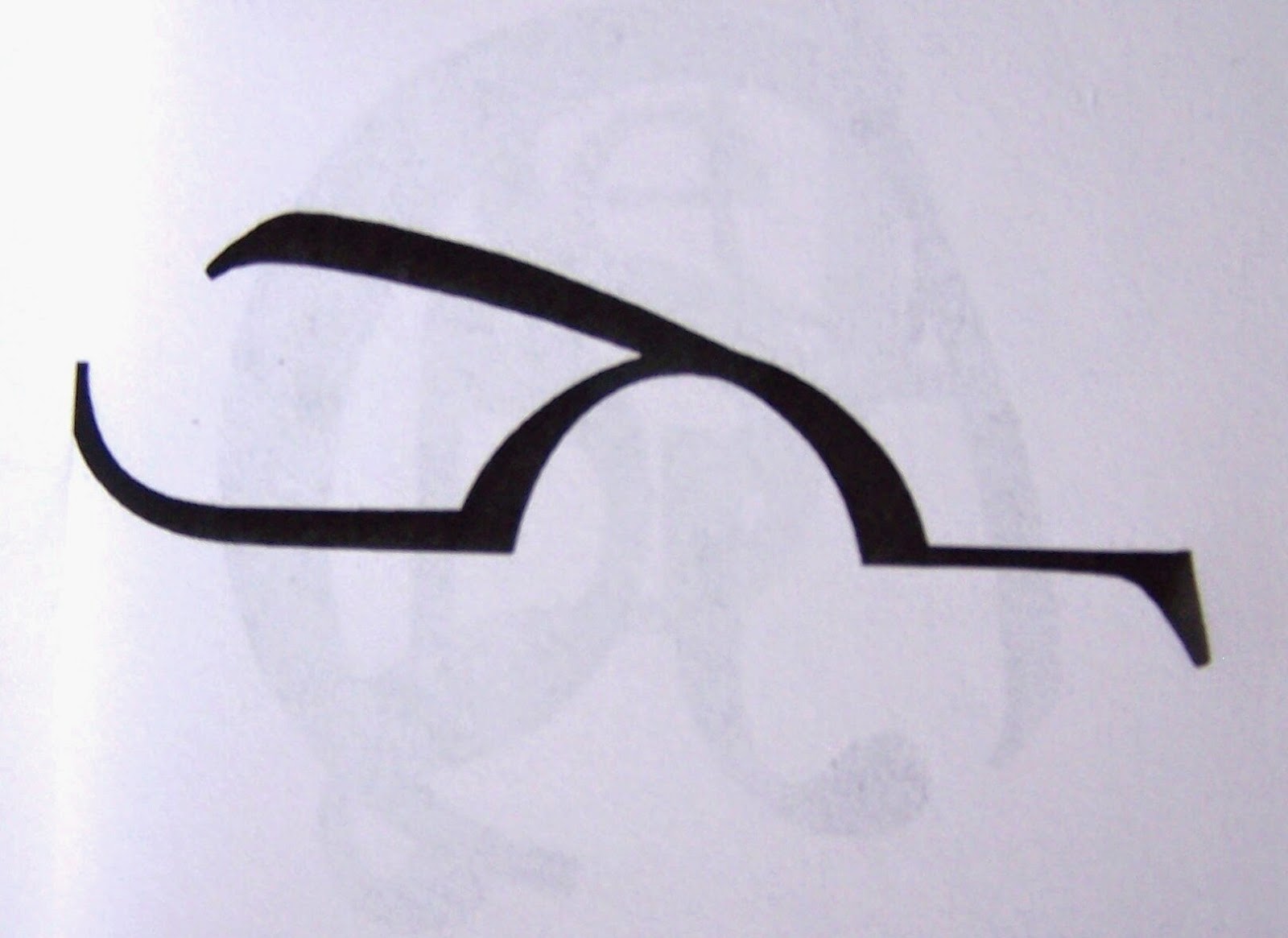 One could of course see objects like this as a kind of doodling. Nothing wrong with that take at all. But the strength and conviction with which each one is made suggests that though chance and casual variability may be starting points, the progress or performance of the making aren't the point, which seems to me to be the arrival at a finished statement that has an undeniable, adamant resistance to further elaboration. They may be found through adjustment or trial and error, but those are merely pathways to the goal. 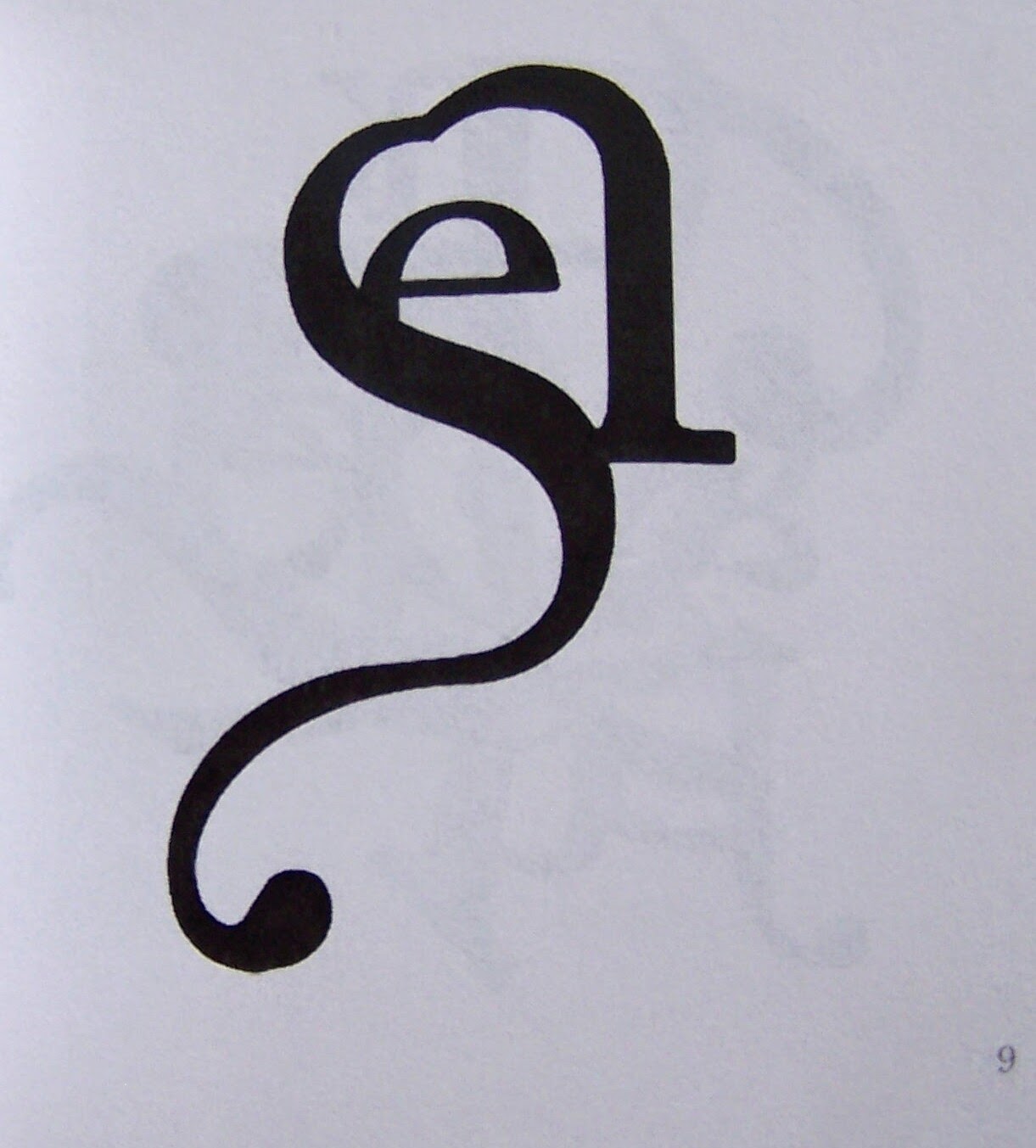 Here are parts of several letters--an A, and E, an S--as well as a serif which may be simply an undenominated flourish or fillip. We could impute suggestive shapes here--which I will leave to the reader--but obviously, on one level, faces or motions or movements or pathways are being suggested. Is the letter S a meander? A less expressive artist might draw an S to suggest a slithering snake--a cliché at best. I'm reminded of the E.E. Cummings poem which ends--

wind
is dragging
the
sea

which suggests an anchor or a cloud tentacle hanging down, "dragging" the ocean floor or the surface of the sea. Clever, and a usefully trivial kind of visual pun. It is exactly this kind of casual play that may open doors to the perception of meanings which are hidden under the quotidian intercourse of everyday verbal use. 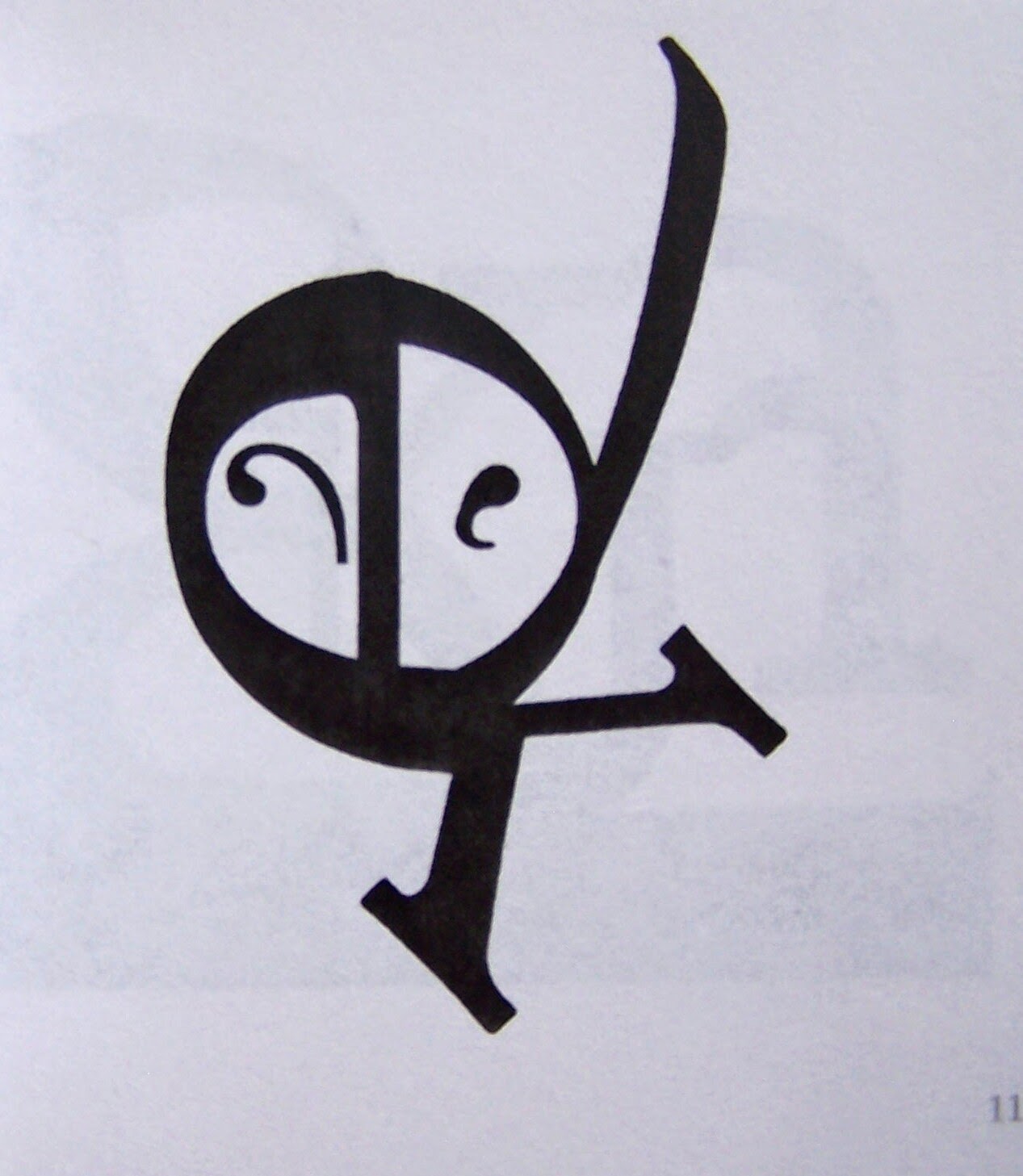 "What the Eye Sees the Eye Knows"

K and E and something else disport with a comma and a single quotation mark, locked in a symbiotic struggle which may be seen as forced or happily engaged, depending upon your mood. The ascending curved line has for me a joyous quirky spirit, the piece may be seen to spin or tumble. Perhaps these letters were just floating around like objects in the void and happened to come into conjunction in this way for a fraction of a second, but were captured before they drifted off again. Do the comma and quotation mark signify eyes? Is it too simplistic to imagine this possibility? 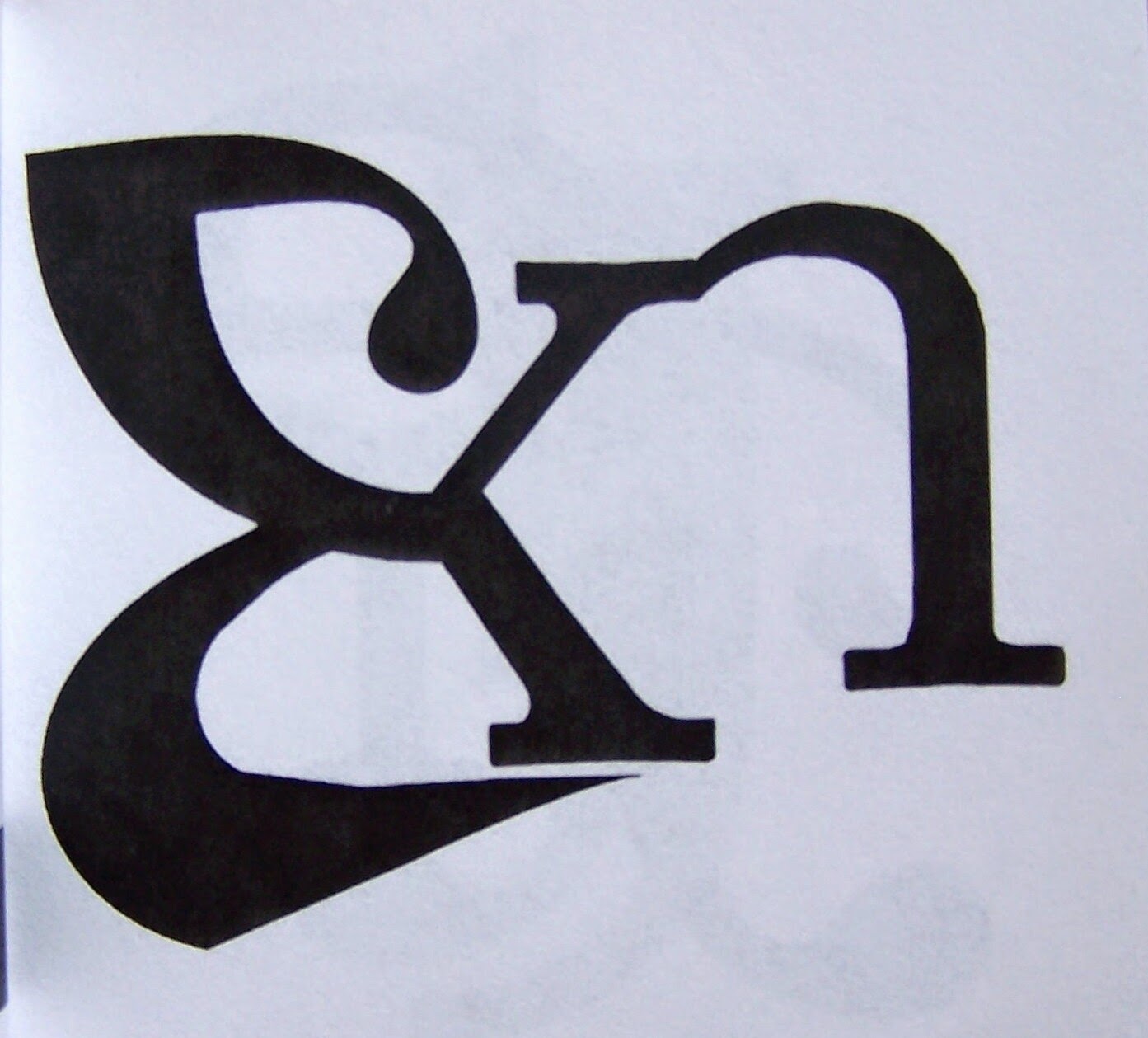 "Knowledge and Its Effects"

This piece has a sort of wedge-iness that is reminiscent (for me) of Franz Kline's black on white abstract canvases. Is it appropriate to think of these works in contrast to Abstract Expressionism? One is always unsure with these pieces, what level of suggestiveness is intended, or whether even asking that question is somehow beside the point. Is an upsidedown J merely the broken off fragment of an N? Can a K be commandeered into service by a . . . what? Does size matter? Is this a variation on the jolly roger or a Gadsden design? Is it threatening? Absurd? Are the interlocking bars and loops a commentary about the effect of, or the expression of knowledge? What is knowledge? Is it in space, or in the mind? Is it unstable, like a subatomic particle that lives only for a fraction of a   millisecond? 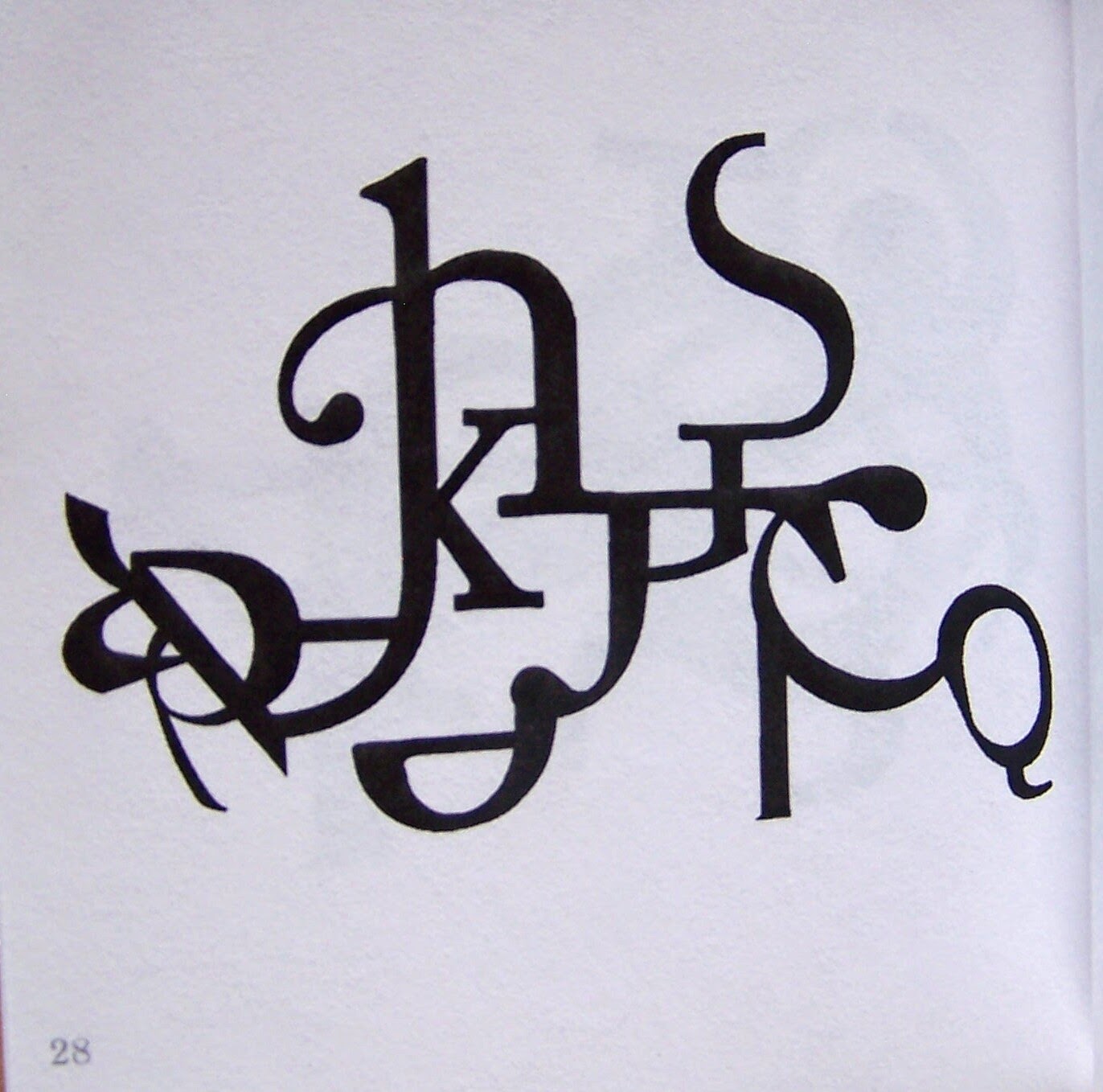 "The Structure of Memory"

Here there is an arrangement of vertical and horizontal lines intersecting with curved and looped shapes. In the imagination, do such alphabetical arrangements occur naturally, the way that events and architectures and echoes are arranged in dreams? Do letters combine and recombine like organic molecules, grand interlocking helixes or vortices, not syntactical or grammatical, but exhibiting a different (new) kind of relationship to each other? Obviously, in Huth's works, or in his mind's eye, they do.

I'm moved to question the relationship between the titles and the works. It struck me initially that the works don't need titles, and may indeed be unnecessarily limited by serving as pointers to an intended meaning. But of course we're free to accept or reject the suggestion the titles offer. The titles aren't really interpretations of the works, though they may be taken as such; still, I think the titles come after the works, not the other way around. The works aren't illustrations of ideas; the titles are possible angles from which to see them.

Geof Huth runs an interesting blog, and his interests extend far beyond the works I've considered here. Check it (and him) out. He (it)'ll repay your interest with interest. 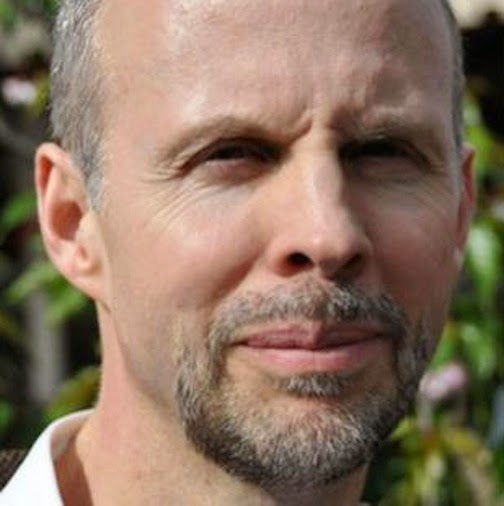 "One is always unsure with these pieces, what level of suggestiveness is intended, or whether even asking that question is somehow beside the point."

I think, Curtis, that it's this purposeful 'suggestiveness' that gives Huth's body of work meaning and significance. His letter-fragments, rather than paying attention to their outward fragmentariness, rather seem in some delightful way to mount, cascade and evolve into potential meanings. In this sense Huth is Saroyan's true successor. I once did look rather carefully at a 'pwoermds' series of his collected in a work entitled "ntst" ( comprising generally of "one word poems, visual plays, portmanteaus, abbreviations and cuts of regular words"), and uncovered there the same meaning persistence behind the arbitrariness and flux of words themselves. Everywhere this delightful tension in Huth's work between the visual (in whatever one of the above-listed forms his vispo practice may happen to take)and the textual space that gives it free play. It's always a rich dialectical play of eye, fragment and space.

Thanks for giving Huth attention here. He's a contemporary master of the minimalist poem.

In that 1967 interview with L.S. Dembro
"On the New Poetics"
Robert Duncan speaks (exactly) to this... to this
&
much, much more. Here is a bit from it:

LD: But how is this idea related to your theories of form?

RD: Well, the poem has its composition from intuitions that are not only like normal intuitions but have behind them the fact that we are thrilled by the patterns of our actual chemical being. They are intuitions about balance, movement, and so forth.
Now our consciousness wants to participate in things, but form exists and it is through form that consciousness must actually participate. It's certainly curious that we pose chaos of formlessness, because it so happens that all our areas of consciousness proceed by form. Seeing is form: you're somehow aware there's a lot of data, but the eye happens to make a form out of it, and consequently we see. We have intuitions that could be of chaos - and yet we really can't experience chaos, because we have no apparatus for it - because experience itself is only form."

then we go-on for another 20 pages of this interview...

I could continue ... however, I would have to re:duce "things" to a mere:

enough about Robert Duncan, let's talk about me

well, not exactly "me" ... but the writing/drawings... as drawings/images
in imagination
always precede words...