Back at the beginning of this season, I wrote a blog about the status of the Giants, one month in. At that point, the Giants were leading the division, with the Dodgers close on their heels. As the Spring wore on, the Giants built up an impressive, dominating lead of over 10 games over their hated rivals to the South.

As we now know, this lead evaporated in mid-season. Marco Scutaro never recovered from his back condition (and his career now looks to be about over, given his age), and there were other problems. Angel Pagan's back also went bad (and by September, he had gone on the disabled list, opting for season-ending surgery to repair a bulging disc). Michael Morse, whose career has been marked by injury, went down in late season with a hip condition, and is apparently lost, even for the playoffs. Brandon Belt and Hector Sanchez both had serious concussions, and Sanchez is also out for the season, Belt only returning in the last week of the regular season. 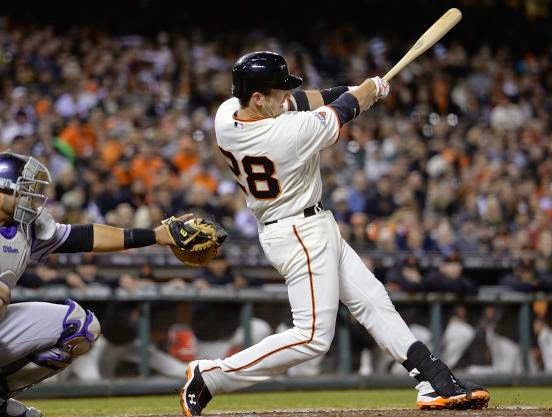 Buster Posey getting a hold of one

When the season began, the starting line-up looked like this:

Second base was a problem all year, with Hicks, Adrianza, and Arias sharing part-time duties, until Joe Panik emerged as the rookie sensation of the year. Morse and Posey split duties at first base when Belt went down, and then the team acquired utility specialist Travis Ishikawa (his second tour with the team).

Meanwhile, Cain's season fell apart and he had arm surgery in a lost year. Lincecum, whose ups and downs are now becoming routine, suddenly, after throwing his second career no-hitter, couldn't get anyone out, and dropped out of the rotation in favor of Yusmeiro Petit, a journeyman middle reliever. Late in the season, they acquired Jake Peavey from Boston, who filled in for Cain, and he has been vitally important down the closing stretch. Vogelsang has been uneven too, but not unexpectedly, given his history. It's obvious that Bumgarner has become the ace of the staff, finishing the season at 18-10, which could easily have been 22-8 if the team had given him even ordinary support. In addition, he became a dangerous hitter in his own right, batting .258 with 4 homers and 15 RBI's, better than most part-time players on any team.

It's no surprise that the Dodgers rose to late season dominance, given their pitching (Kershaw, 21-3, Greinke, 17-8, Ryu, 14-7, and Jansen, 44 saves). The surprise is that they didn't break away faster, since the Giants were so riddled with injuries and unexpected slumps (Romo, Lincecum, Sandoval, Morse).

Last evening the Giants persevered in a record-setting 18 inning affair over the Washington Nationals, in which the Nats did not score for 15 innings, finally capitulating when Belt went yard in the top of the frame. Now up 2-0 in the best of 5 series, they look good to make it to the League playoffs, against either the Dodgers or the Cardinals (who are 1-1 in their series).

All in all, the Giants have fared well, securing one of two wild card spots, polishing off the Pirates (in their park), and jumping on the Nats, who were favored by everyone over San Francisco.

At this juncture, it appears the team may actually make it to the Series, and could even win it. A month ago, when the team was mired in a long slump, who would have predicted this? In a season of injuries and uneven performances, they appear to be peaking at just the right moment. With Belt back, and Peavey pitching his heart out, it just might come true.

first games of this entire season that I've listened to... and on the radio.... which was very neat.... like when I "watched" the Senators on our radio back in the '50's.

anyway... I listened
to every play/pitch
and came away w/

that these two teams
were amateurs

not good baseball, as far as I am concerned.

seems like everything connects with D.C. implodes. Good thing that our leaders up the street (on Capitol Hill are "winning" all the War Games that they are playing: no runs, no hits, no errors: RIGHT !