In T.S. Eliot's famous minor poem The Hollow Men, there is a repeated refrain,

This quatrain has entered the culture as a kind of proto-Modernist formula, defining a certain weary cynicism characteristic of its time (the complete version was first published in 1925). As an emblematic heresy, antithetical to the reigning pieties of its time, it stands as an echoing watershed moment in the progress of Western Culture--dry, exhausted, camp, rejecting the aspiring "suit" of respectable armor of the knights of industry and finance (hollow men). European civilization may have seemed decadent, going through the motions, in the years following the disillusion and devastation of the First World War.

Meanwhile, 13 years later, a young Serbian boy is born in Belgrade. Sixteen years later, 1954, he emigrated to America. His first two books, published by George Hitchcock's Kayak Press, were described as among the "ugliest" books ever, illustrated in Hitchcock's signature amateur surreal-collage style, printed on cheap colored paper, crudely stapled or glued together. But in a way, Simic's work rather belonged in that format, given its formal manner. Hitchcock liked surrealists, and Simic's work was then, and has always tended to be, surrealist in its approach to subject-matter.

Given his background, it's no surprise that Simic was heavily influenced by the literary traditions of his original native language, as well as by the events and experiences he had lived through in Yugoslavia before coming to America. His translations of Yugoslav poets have appeared with regularity right beside his own poetry collections.

His poetic style has been consistent throughout the 50 years since he began publishing, and it has brought him successive honors and awards, including a stint as America's Poet Laureate, as well as a Pulitzer Prize for his collection The World Doesn't End [1989], a collection of short prose-poems. Though the prose poem hasn't been Simic's primary form--most of his work consists of relatively short poems, narrow lines--his work has always been expressed through short, grammatically simple declarative statements. Formally, he isn't an innovator, isn't interested in playing with or altering syntax, or in rhetorical flourishes. His vocabulary is elemental.

Simic could be, and has been, called primitive. This primitive quality derives I think not just from his subject-matter, but from the deliberately unadorned and "naive" way he presents it. There is no showing off in Simic's work; he's not trying to impress you with his facility or his ability to construct complex structures. He usually presents himself as a simpleton, who's tapped in to a deep stream of imagery or event, crudely humorous, or violent, or mysterious. I think of Simic in the same context as Jerzy Kosinski, both men as witnesses to a kind of primordial, semi- or pre-civilized European folk memory--in Simic's case, his experience of the distress and dislocation brought about by World War II in Yugoslavia, during his impressionable years as a child and young teenager.

The cover of The World Doesn't End shows a photo of an untitled collage by Joseph Cornell, a very appropriate image for the kind of poems Simic writes, which tend to be collections of small objects or events whose only connection to each other is their metaphorical relationships he is able to set up. 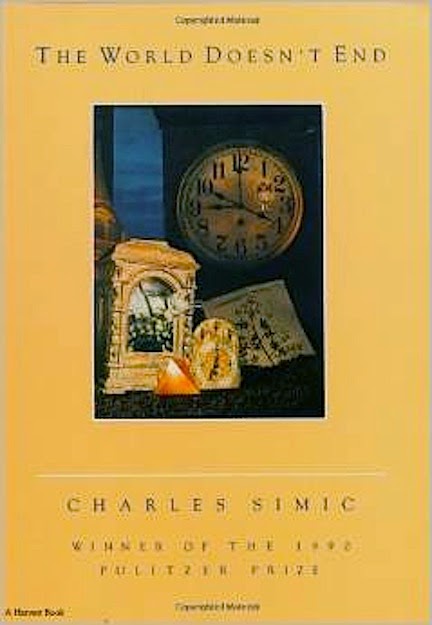 It's a store that specializes in antique porcelain. She goes around it with a finger on her lips. Tsss! We must be quiet when we come near the teacups. Not a breath allowed near the sugar bowls. A teeny grain of dust has fallen on a wafer-thin saucer. She makes an "oh" with her owlet-mouth. On her feet she wears soft, thickly padded slippers around which mice scurry.


A piece like this reads as a kind of surreal child's story, abbreviated and altered to suit an adult mind.

I am the last Napoleonic soldier. It's almost two hundred years later and I am still retreating from Moscow. The road is lined with white birch trees and the mud comes up to my knees. The one-eyed woman wants to sell me a chicken, and I don't even have any clothes on.
The Germans are going one way; I am going the other. The Russians are going still another way and waving good-by. I have a ceremonial saber. I use it to cut my hair, which is four feet long.


All the pieces in the book are untitled, except for five (which are set out in lines, as poems). Simic's imagination runs to the macabre, the odd, the absurd. People and things simply appear, without explanation or context, and magical, improbable events and visions occur without warning or continuity. They might seem like Magritte compositions, with a tuba on fire, or a bird of stone floating above a cubic ocean. Simic's poetic world is one of continual surprises, constant upheaval and squirrelly intrusions. His is a language of images, constructed in the way dreams are, like journeys through slightly familiar--though often suddenly unfamiliar--surroundings.

One feels that these little stories--or whatever they are--are like half-remembered (or imperfectly recovered) mythic fairy-tales, conjured up during the dark ages of European pre-history by slavic ancestors living in tribes among dense forested regions. Religions tell us that the world is born and the world ends, but what if the world was never born, and what if the world doesn't end, but just goes on and on forever, the living begetting and getting and dying forever, without any reckoning? That has the ring of desperation or hopelessness about it.

The dead man steps down from the scaffold. He holds his bloody head under his arm.
The apple trees are in flower. He's making his way to the village tavern with everybody watching. There, he takes a seat at one of the tables and orders two beers, one for him and one for his head. My mother wipes her hands on her apron and serves him.
It's so quiet in the world. One can hear the old river, which in its confusion sometimes forgets and flows backwards.


If the violence and humor here seems crude, that may be the underlying message. Nature, and the primitive communal life of pre-civilized humanity, were indeed harsh, and unforgiving. We know that in pre-historic times, human life expectancy was less than 35 years, and without medicine or dentistry, pain and suffering and disability were nearly universal. Sex and reproduction began in the early 'teens, and conflict among groups was rife. Superstition and fear reigned supreme. Technology may have taken mankind "out of the woods" but perhaps may not have taken the "woods" out of mankind.

As we mature, do we outgrow the stories of our childhood? Are children's tales really innocent diversions, or do they serve as  passage-ways out of innocence into the terrible nightmare of real life--its strangeness and mystery, its suffering and hopelessness and death? If the surrealists wanted to tap into the deeper levels of consciousness, where reality and unreality jostle uncertainly together, would they find there the evidence of our madness, or the keys to a brilliant paradise of possibility and ecstatic enlightenment?

Simic speaks in the same common language of post-surrealist surrealists, a poorly defined group which might include James Tate, Mark Strand, Philip Lamantia, Robert Bly, Richard Brautigan, Stephen Dobyns, Russell Edson, James Wright. A poetry straightforward in its syntax and rhetoric and locutions, but very free with narrative continuity, using fantastic or absurd imagery and event as ciphers in a language of intuitive apperception. Most effective when most convincingly profound in its probings of "secret" connections among objects, symbols, or impressions. Comic or serious elements co-existing in the same head, even in the same poem, with unpredictable results.

Simic's gift seems to have been to combine the primitivist's raw earthiness with the surrealist's dexterity in the use of improbable imagery--its drollery and bizarre humor. It often feels almost like a translation from another language, and like translation may sometimes seem alien or foreign in expression. And with Simic, it's always important to remember that he's essentially an emigré--a mind poised between different cultures--Serbo-Croatian and American--and different languages. His work doesn't feel American, and its alien quality seems deliberately cultivated, to charm and mystify his American audience. His is an American success story, the foreign immigrant who rose to the front rank of literary prominence, to attain the post of Poet Laureate of his adopted country. 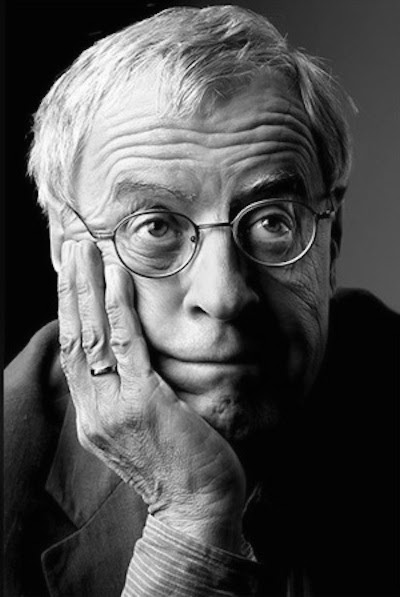