Lately, I've begun to have some symptoms of early arthritis. Out of the blue, my right elbow has begun to ache and stiffen without any immediate trauma.

I've always been fairly complacent about how much stress I put on my body. I lift heavy objects and over-exert frequently. I've begun to think, after 67 years of active life, that I must be indestructible.

Over the years, I've damaged the cartilage in both my knees, but I have almost no symptoms from that, unless I try running long distances, which can lead to discomfort. As we get older, we tend to become somewhat more sedentary, which may mask oncoming weaknesses in our physiology.

I guess, someday, I may end up having to use a cane or other ambulatory appliance. I don't dwell on such things, so when and if that day comes, I'll just have to deal with it then.

In the meantime, I encountered my very first walking-stick.

Returning home from work in the later afternoon, I was closing our redwood gate, when I noticed a sliver of wood leaning from the edge of the vertical frame member. I looked at it intently, and realized to my utter surprise, that it was in fact an insect.

Partly aged redwood has a reddish-brown tinge, and the Walking Stick--which is what this insect is called--could easily go unnoticed unless you were really looking for one. If it had been on the fence, I would never have seen it. 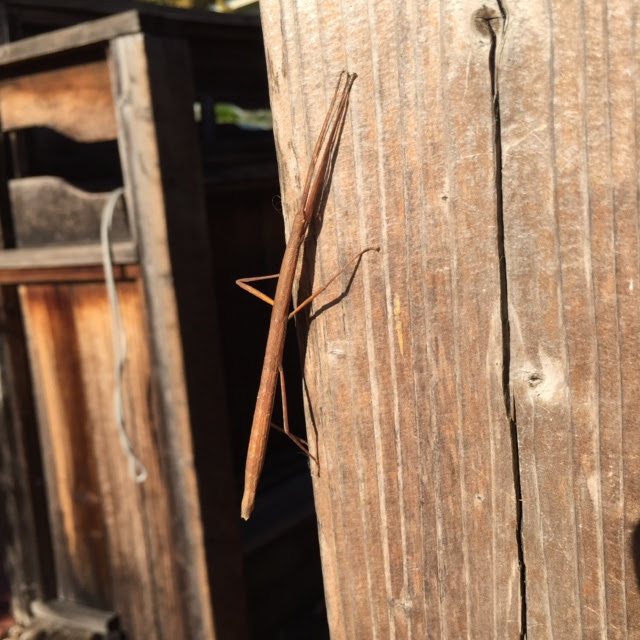 Photo of Walkingstick on our front gate

According to what I've been able to find online, this should belong to the Northern Walkingstick family, except that the typical "long antennae" seem to be entirely missing--unless I'm seeing it wrong. I'm thinking this must be a damaged bug, since it has only four of the usual six legs. Maybe it got its head caught in the gate-edge, or a hungry bird bit off a piece?

These are rare insects. I don't know many people who've reported seeing them here in California, but I've read about them before. At first, I thought it looked like a big brown Praying Mantis, and I suspect they may be related to mantises.This one appeared to be about six inches long, and probably much longer with its head and antennae. It wasn't moving, but you could see very tiny adjustments of the legs--it was definitely alive, but probably without its head, it was just clinging out of muscle tone or something.