After initially establishing himself at the beginning of his career as a talented poet with a rhetorical style--marked by a dense, rich dose of metaphysical formalism--Robert Lowell "thawed out" in the 1950's, and produced two books leavened with autobiographical detail, and a relaxed manner, which belied the obligations implied in earlier efforts. 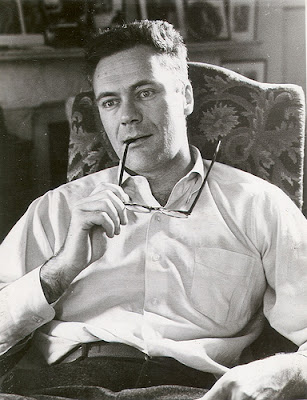 Among the poems in the second of those two volumes of verse (Life Studies, 1959 and For the Union Dead, 1964), is this little elegy, notable for its brevity and seeming simplicity. Without knowing more about its subject than what we learn in the poem itself, any reader might suppose that Clark was likely a public figure whom the author had once known in adolescence, one seen rather from afar. The poem's justification, then, would derive either from the depth of grief which the speaker feels, or from the keenness of detail which he uses to evoke his subject, or both.


This poem has always resonated for me. Though I was raised on the West Coast, not among the Boston Brahmin culture that was Lowell's birthright, I can still feel the generic sense of loss at hearing of the death of comrades known in youth. The people we had known in childhood, or adolescence, are a select group whose fates are involuntarily bound to ours. There is usually no reason to suppose that we should regard them either as special, or as important, simply on account of the circumstance of our shared ages or condition or proximity. People who become famous may be remembered by those who knew them "when they were unknown" though in the case of very rich, or very talented, individuals, it may become obvious early on, that we will have a reason to remember them eventually.

In the case of Lowell, and Clark, there is the underlying social presumption of privilege. Though Alfred Corning Clark is easily identified, as the grandson (and namesake) of the co-founder of the Singer Sewing Machine Company, there is little detail that I can locate online to flesh out the character Lowell describes in the poem. As scion of one of the great industrial giants' fortunes passed down from the latter half of the 19th Century, Clark's inheritance would have meant he would never have to work, and would bear the burden of that privilege according to his nature.

Formally, the poem employs a simple rough three beat line, essentially prose chopped according to the natural rhythms of phraseology. It's an "easy" poem in that sense, which seems to ask very little in the way of complex comprehension, its ironies held in delicate suspension between simple description and the tantalizing suggestions of ambiguity. Lowell, as an adult, looks both forward from childhood, and back, through the lens of his vicarious adolescent gaze, and his later adult cynicism.

The details we're given--what Clark wore, the bare lineaments of his character,  the games of chess that form(ed) the basis of their interaction--would suggest they weren't intimate. Indeed, it is precisely Clark's diffident character ("triumphant"), his refusal of exertion, and an intelligence that "pulsed" in the "pale concavities of [his] forehead . . . too bored, quick and cool to laugh," that the speaker recalls. It is precisely Clark's cool remoteness, his "reluctance" to "unite" even while playing an "unconventional illegal" game of chess, that attracts Lowell. Lowell, the powerfully precocious young poet-to-become, admires Clark's unflappability, his serene assumption of disengagement, without responsibilities, without obligation, without embarrassing passions. Or at least that is how Lowell wishes us to think he feels. It's a strategic choice, one that puts Clark in the cross-hairs of the ironies Lowell can't help expressing.

The details--the wintergreen lifesavers--the "pale concavities"--the "cool" laugh--and that denouement, "motionless as a lizard in the sun"--all suggest a chill, clear as ice, all the controlled reservations of upper class superiority, barren, impotent, remote, selfish, streamlined, decadent, dry, enervated, dull. Yet it's just this emotionally impoverished sterility which inspires the poem.

Elegies may be the occasion for an outpouring of grief, or of amusement, or of rancor.  We can't change the past, especially our childhoods, which were the given context of the lives we were born to. We may sense a shared bond that is irresistible, or inescapable, or best ignored and forgotten. In this case, we may feel that Lowell's embrace of his own past, filled with all the complexities of ambiguous affection, embarrassment and pride, is merely symbolized by his eulogy for a childhood companion. We can tell from the way Lowell describes him, that Clark was almost certainly NOT the warm companion we associate with friendship, or shared exploits. The Clark of the poem is someone seen from a little distance, with the same cool detachment that is the central significance of his character.  How might Clark have felt about Lowell's version of him? 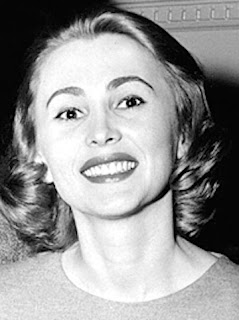 Interestingly, Clark, whose sixth wife inherited his fortune, had only been married to her for 13 days before "dying in his sleep" of "natural causes" at age 45! That sixth wife, born Alicja Kopzynska [aka: Alicia Darr] in Poland in 1935, had been raised in Lodz, but was allowed to emigrate to the U.S. in 1950 under the so-called Displaced Persons Act. Soon thereafter, Kopzynska's exploits as a notorious playgirl and fortune hunter commenced. Initially linked to young John F. Kennedy, in 1951, with whom she may have become pregnant, she would later be linked socially (and romantically as well) to British actor Edmund Purdom [a British matinee idol specializing in "sword and sandal" epics], to whom she was married (1957-58)-- 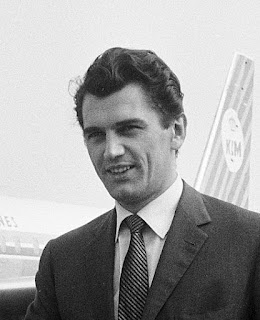 --as well as Tyrone Power,  Richard Beymer, Stewart Wallach, Roberto Rossellini, French guitarist Oliver Despax, James Fox,  Omar Sharif, Marco Borghese, Norman Gay (her husband for a time in Nassau), William Holden, Gary Cooper, etc. Following Clark's death, at which point she scored ten million, in addition to a regular $100, 000 annuity pay-out, Darr/Clark would enter the jet set world of European capitols, Caribbean high-life, and engage in numerous affairs and liaisons with the rich and famous, and would make regular notorious mention in the gossip columns of the period. At one point, apparently, J. Edgar Hoover told then Attorney-General Robert F. Kennedy in 1963 that the FBI had information his brother John had paid a $500,000 settlement and had court records sealed in lawsuit brought by a woman who claimed to have been engaged to marry the former President in 1951; allegedly the money was paid to drop the case in 1961; Ms. Darr couldn't be reached for comment. It almost makes one wonder whether Clark's death in 1961 can have been so "natural" after all. 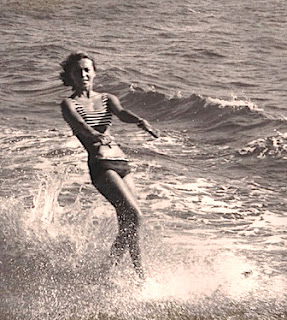 The jet-setter in the Bahamas

Of the previous five wives, I can find nothing online.

The closing picture of Clark, as a "motionless . . . lizard in the sun" has always stayed with me.  Lizards are cold-blooded reptiles, which is to say they don't preserve their own body heat, and must soak up heat from the sun by resting outdoors during daytimes.

Lowell's reputation as one of America's best poets has always been somewhat colored by the fact of his presumed "entitlement"--as a function of his having descended from one of the famous "founding families" of New England. It is as if we ought to regard Lowell as having benefited, as an artist, by his associations--male, white, upper class, connected, intellectual, elite, safe, propelled by position and recognition into a natural, if undeserved, advantage.

But people can't choose their inheritance. This is one of the ironies of our politically correct contemporary literary world, that we should demand that our writers and artists reflect the philosophical and religious and sociological pieties of the moment. Yet there is no evidence that the kind of advantage we identify with privilege should ever guarantee genius, or ability, or the effort required to make the best of one's means. Lowell's early work demonstrated that he was first interested in a religious poetry that expressed the conflicts and dilemmas of a tragic world view. It was only later, after he had suffered some serious personal crises, that he undertook to explore his own life in the crucible of his art. And as his reading public came to know, that life was anything but secure. Beset from the beginning by mental demons, difficulties with his parents, conscientious objection and imprisonment, multiple hospitalizations for bi-polar episodes, broken marriages and affairs, lapsed appointments, radical political resistance,  etc.,  Lowell came to see his own artistic life as a public drama carried on in full view of the literary world. But the accomplishments of his work could not be "excused" or "exonerated" by his life. In large measure, he may be said to have "invented" Confessionalism, the literary trope that played such a large part in the poetry of the Sixties, Seventies, and still exerts a powerful influence today in the work of Frederick Seidel, Sharon Olds, among many others. The notion of addressing the facts of one's personal life in poetry in a frank, uncompromising manner has something of the exhibitionistic about it. Personally, I find poetry which does only that, and nothing more, suffers a poverty of invention. But one could never say that of Lowell's work, even when it veered uncomfortably close. The ode to Clark is one example of how a direct response to real personal events, or connections, can be managed, without recourse to mawkish obsequy, or vicarious prurient revelation. I can share Lowell's sadness, at a certain moment in time, without in any way sharing the nature of his grief, no matter how ambiguous it may have been, or how conflicted his expression of it would be. Is wealth or privilege in the possessor prima facie evidence of decadence?

What Lowell seems to be implying is that the qualities which privilege bestows, may be aesthetically inspiring, but still be arid in themselves.  The vanity or nonchalant negligence implied by cycling through six marriages may simply be a reflection of individual temperament, rather than an expression of class arrogance. Yet Lowell is able to have it both ways, since the tone of the poem is clearly not slavish, but measured, and deeply ironic in its regard. The speaker is fully implicated in the world he describes, which is what we want from writers. Not the easy condemnation of the smug ideologue, nor pathetic apologetics, but compassion mixed with rueful modesty.

Posted by Curtis Faville at 8:36 PM