I've written previously about George Oppen's Discrete Series, in a blogpost here under Minimalism Part IV, on July 30, 2009. As an example of an approach to verse that employed a reductive, spare concision to convey unusual effects, it has always struck me as an ideal example of the form. I loved that book, long before I knew the back-story of its composition and publication, and appreciated its value without realizing the context of its initial emphasis, or why it would eventually become symbolic in its temporal isolation in the middle of the 1930's. 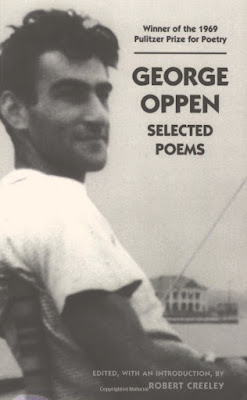 I recently came upon a copy of Oppen's Selected Poems [New Directions, 2003], edited by Robert Creeley, with a Chronology of Oppen's life by Rachel Blau DuPlessis, a book which for reasons I can't explain I'd never seen before. Published well after Oppen [1908-1984] had died, it's a telling, though perhaps unintentional, piece of evidence about how Creeley saw the elder poet, a figure who had explored some of the same literary territory that the younger man would, thirty years later.

As the Chronology makes clear, Oppen's earlier life was unusual in a number of ways. Born into a comparatively well-off Jewish family, his Mother committed suicide when George was only a toddler. Early difficulties in school lead to a restless youth, and much travel. While still in his 'teens, he meets and marries Mary, his life-companion, and together they commit to political principles that align them with the Communist Party, which they join in 1935, becoming active in union organizing and relief efforts. 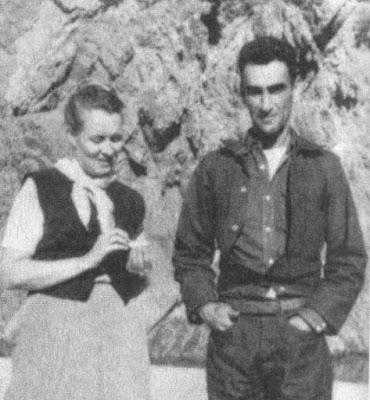 A young Oppen with the wife Mary

Creeley, born in 1926, is only 9 when Discrete Series is published in 1935. Oppen is a full generation older than Creeley. According to the Chronology, Oppen had virtually completed the book by 1930, when he was just 22. Discrete Series, then, is in fact a very young man's book, written at the end of the 1920's, just before the Wall Street Crash, at the beginning of the Depression, by a man whose political sympathies are, from an early age, Left. The young author decides at this key juncture, that the artistic life must be set aside, in favor of social awareness and action, sets aside writing altogether, and by the beginning of the War, he is working in an automobile factory in Detroit. Drafted into the Army, he serves in Europe where he is severely wounded in the field, and leaves the service a highly decorated veteran. During the early 'Fifties, he comes under pressure from the FBI for his political activity, and decides in 1950 to live in Mexico. The Oppens don't return to the U.S. until 1960, when he begins once again to take up his pen. In close succession, he publishes three books of poems [The Materials, 1962; This in Which, 1965; and Of Being Numerous, 1968]. This outpouring of work (he wins the Pulitzer for the third book) leads to a general recognition by a new generation of readers, who for the most part are unaware of the author's earlier incarnation as a 'Thirties activist. Though the first book is reprinted in 1966, the context of its original appearance, and the meaning of the long hiatus of publication, remain largely unknown.

It would take a whole book-length study even to outline the literary developments which occur between 1935 and 1960, but suffice it to say that how Oppen's work was initially viewed during the 1960's, and later, must be understood as a part of a larger struggle taking place in American art and literature during this period, between the Depression and the beginning of the 1960's. Oppen's "underground" self-exile and prohibition effectively removes him from the time-line for 20 years, a period during which socialism is rejected, the country fights and wins a world war, then undergoes a tortuous period of anxiety and paranoia (The McCarthy Era), while experiencing its period of greatest broad economic prosperity.

In the meantime, Creeley, who comes of age as a writer during the notoriously quiet and tradition-bound 1950's, begins to achieve recognition and success at precisely the same time as the "later" Oppen. Their respective careers run parallel through the 1960's and 1970's, each participating in what we now understand as the period of the New American Poetry, initiated by the publication of the anthology of that name [Grove Press, 1960] edited by Donald Allen. Ironically, Oppen cannot be included in that selection, because he hasn't yet written the poems that will place him among its company! 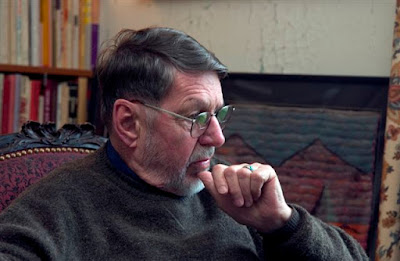 Looking back once again, one notes that Oppen had been a key member of the Objectivists group, which included Reznikoff, Rakosi, Zukofsky, Pound, Niedecker and Carlos Williams. (Discrete Series is, in effect, a self-published book, since Oppen is the key funder to the Objectivist Press.) The associations thus formed, in the turmoil of the world-wide Depression (a period of radical political and aesthetic engagement) will be repudiated or abandoned by these writers, after World War II, effacing the memory and effect of their earlier commitments, only to be rediscovered, as if for the first time, by the younger generation of the 1960's. 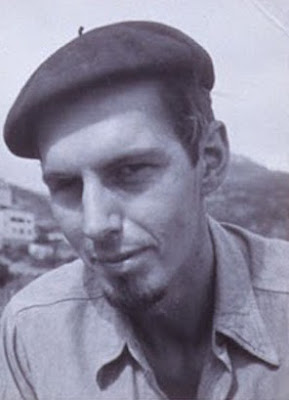 For Creeley, Objectivism was an historical artifact, whose causes and concerns had faded from memory. Like Oppen's first readers in the 1960's, he understood the older writer as a survivor from an earlier period, recollecting those life-experiences in a calm, meditative style. The marked differences between the method of the poems in Discrete Series and those written after 1958, suggest not just the transformations wrought by time, but an aesthetic about-face which undercuts the meaning and value of the earlier work. The divide between the earlier and later Oppen isn't linear, following the clear descent from a sharp eye to a thoughtful reappraisal, but a reemergence from nearly total obscurity. 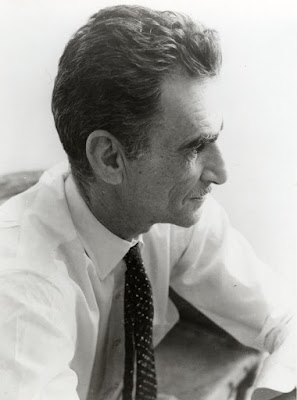 Turning to Creeley's selections, it is astonishing to see that he chooses only two poems from Discrete Series--"The knowledge not of sorrow, you were" and "The edge of the ocean"--as if that earlier volume were an afterthought, only to be remarked with a couple of small snapshots for the family album. Why, one might ask, would Creeley's appreciation of Oppen be so narrowly focused on the later writer, instead of upon the youthful (30 years earlier) revolutionary of 1928? 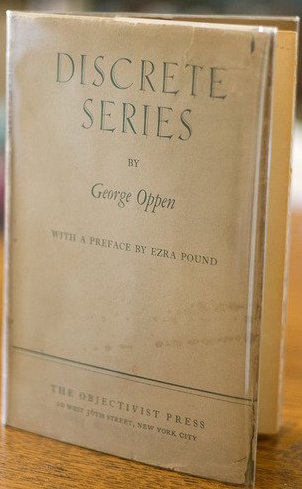 The 1st Edition of Discrete Series

It's intriguing to wonder why Creeley would choose to de-emphasize the younger Oppen in favor of the later. Perhaps it's because he felt that the issues and concerns of the earlier writer were no longer pertinent to a later audience. Perhaps those early, "objectivist" priorities (sincerity and objectification) were no longer valid measures. Oppen had said (in retrospect) "a discrete series is a series of terms each of which is empirically derived, each one of which is empirically true. And this is the reason for the fragmentary character of those poems [in Discrete Series]." It's instructive to place the poems in Discrete Series beside those of Creeley during his own "minimalist" phase--Pieces [Scribner's, 1969]. There can be no doubt that Creeley's indulgence in the minimalist form is parallel to Oppen's, yet there are clear differences in style and approach. While Oppen's poems are "fragmentary" and use parataxis freely, Creeley's are invariably grammatical and even narrative in progression, frequently reducing poems down to singular grammatical units, but never breaking them apart. Oppen's poems in Discrete Series are rather molecular, while Creeley's are constructive, using what lies to hand.

Did Creeley's de-emphasis of the earlier Oppen also signal a political dismissal? It's a question that I leave open for the time being. I can only say that it's strange that he would choose fully 44 pages of work from the end of Oppen's career (the poems from Seascape: Needle's Eye [1972]; Myth of the Blaze [1975]; and Primitive [1978]), reprinting only two poems (two pages) from Discrete Series. In my view, the poems in Discrete Series are not merely stronger than nearly everything he published later; they are so much more original than anything that had come before, and driven by a vision which is so much clearer and and better defined than the poems after 1958, there is hardly any comparison.

If we wanted to write the alternative literary history of America, we would certainly have to mark the publication of Discrete Series in 1935 as among a handful of signal events, many times more vital and predictive of later developments, than anything else that was being done at the time. Perhaps the point is that Oppen's earlier book had been so thoroughly effaced from literary consciousness that its discoveries and explorations would have to be completely reinvented by writers such as Eigner, Creeley, and others of the post-War generation; as if--as if!--Discrete Series had never happened! It is almost as if Creeley's deliberate suppression of that work were a new kind of repudiation of an earlier exploration and accomplishment--not on political grounds, but on aesthetic ones.

The self-abnegation implied by Oppen's abandonment of verse as a kind of irresponsible activity in face of widespread social distress, is matched by the chastening after-effects of political suppression following the McCarthy Era. It is possible, perhaps, to deliberately "forget" the unfortunate events of a generation or two back--and the part played in them by active participants--but the written artifacts can't be so easily set aside. Creeley sees Discrete Series through the wrong end of his telescope, and judges it to have been unformed and relatively minor.

Why is it that each generation tends to see the efforts of preceding ranks as the work of "old men"--and not the vigorous, hopeful, brave experiments of young men, just starting out, fresh and untamed, unswayed by caution, or fear of rejection?

Discrete Series is the writing of a very young man. That tells us a great deal about the work, and about those who do or don't care to acknowledge the fact.