Frank Lloyd Wright's career was a long one, and it divides chronologically into distinct periods.

Born in the middle of the Victorian 19th Century, he lived to be 91, and even at the end, he was still actively producing works which would be among his most noteworthy. The impressive early works can still be seen on Oak Park, Illinois, a suburb of Chicago. He developed a design principle which he called his "Prairie Style"--which emphasized strong horizontal lines, inspired by the flat, gently undulating Midwest countryside. All of his work demonstrates, as well, a strong geometric feeling, often credited to his childhood play with Froebel blocks, a kind of toy used in kindergartens of the day.

During the 1930's, Wright designed a series of residential structures which came to be known as the Usonian Houses. Unlike the earlier Prairie structures, these designs had no basements or attics, were primarily single-story buildings; they continued his focus on long, horizontal sight lines, with banks of horizontal windows, and also exploited open plan layouts; and were always well-integrated (fitted) into the landscape where they stood. Among the most successful and satisfying of his Usonian houses, was the Hanna House in Stanford, California, begun in 1937, which employs the application of the 30-60 degree angle--roughly, the angular dimensional arc of the honeycomb. 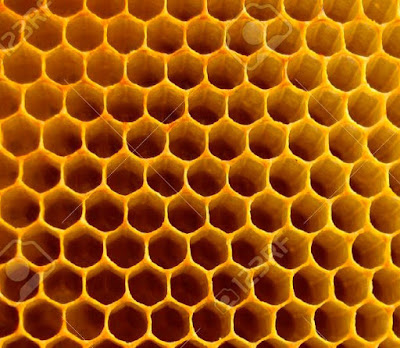 Once, during my class-work for the Landscape Architecture degree studies, I had an encounter with a TA about a project we had been assigned. Remembering how much I liked Wright's Hanna House, I remarked that one very good way to make an interesting design, was to select a strong visual or structural principle, and apply it to a specific site. The TA looked at me quizzically, and replied that "that isn't what design is about at all!" and proceeded to tell me that only through inductive, incremental consideration of each feature and limitation of the site, along with the functional requirements of the structure, could one arrive at a successful design. I said, in reply, that such an approach would produce something that had no character, since it would be nothing more than a hodgepodge of adaptations to a host of unintegrated aspects. In other words, I felt that taking her approach would yield results that had no inherent beauty, only functional parts somehow pieced together like a puzzle. 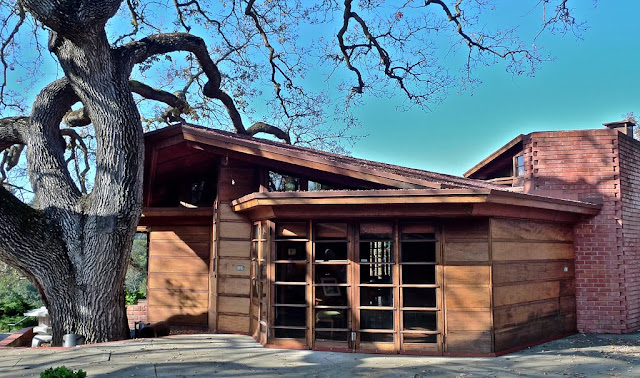 If we follow this dialectic too far, we end up in a theoretical quagmire. No two individual designs are ever completely equivalent--though if they are, they're row houses or "tract" houses, cookie-cutter structures with no variety, and without a specific response to site. Of course, architecture is not a "pure art" branch of aesthetics. Every building is a combination of form and function, and involves the compromised intersection of the two principles. Nevertheless, remembering the Hanna House, it's possible to appreciate how "forcing" oneself to appropriate a strict geometric figure onto an "organic" locus is one way to generate creative solutions. One limitation may be the shape of the land, another may be the "artificial" structural principle brought to bear upon the given context. Here is a schematic of the project-- 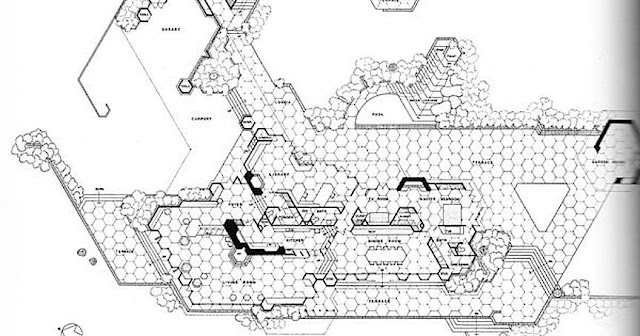 The "germ" of the design is visible in the hexagonal terrace tiles, which fit perfectly into the perimeter wall angles. This visual queue is probably not initially obvious to a visitor to the site, but it becomes more and more confirming as you move around, and inside the structure. The idea of imposing a design principle onto a site, while maintaining the functional organization of space, is like the golden section. It makes the existence of such a house almost a natural expression of the land itself, almost "inevitable" in its realization of possible form(s).

There are, of course, many other aspects to the structure. By contemporary standards, the house possesses a luxurious consumption of area, and would be beyond the means of most clients. It's a demonstration of the possibilities of an ideal single family dwelling, exploited without regard for a more limited budget, or the surrounding real estate. When the house was originally commissioned, it literally stood alone in the landscape, but was eventually surrounded by the Stanford University campus, and it eventually became the property of the institution, now open to the public as an historic landmark, and used occasionally for official functions. 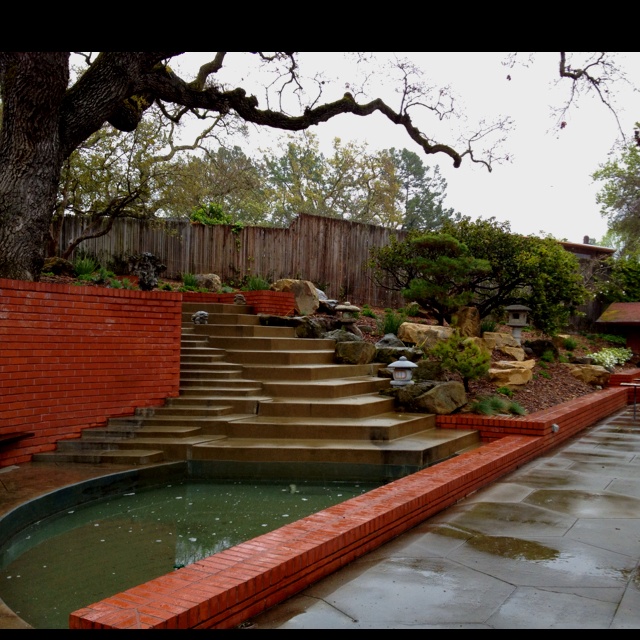 Is there anything "logical" about 30-60 degree angles? In other words, are corners and edges and intersections at that angle less "efficient" in terms of spatial use? 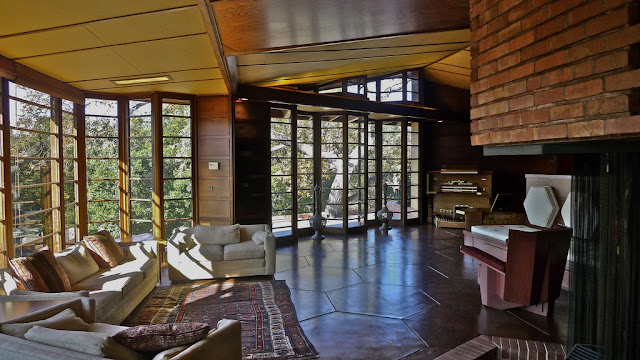 These interiors seem filled with light, largely as a result of making most of the exterior walls glazed with clear glass. There are disadvantages to having this much transparency, not least of which is you need sufficient insulation (or distance) from your neighbors. But it also brings the outside inside, an interpenetration that is inviting, or disquieting, depending on your temperament. 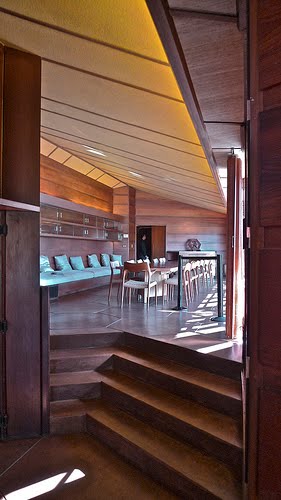 Another aspect of the odd angles is tight corners. Philip Johnson believed in what he called the "processional" quality of architectural design, by which he meant the incremental unfolding of views and proprioceptive awareness of space, as in a procession. As we move through a space, our sense of how we feel, is a process, i.e., not a static, fixed point of reference, but a constantly shifting perspective. Transitions from one point to another allow a structure to be perceived kinetically. In the Hanna house, our movement through the house presents a constantly changing view of the outside, such that there's a continuing conversation between external and internal areas. There's an insistence upon this exposed quality, which some might find intrusive. The whole house itself is an escape, but once within its limits, there seems almost no privacy.

In most Wright houses, landscape plays a crucial part. The contrast between the hard-edged man-made materials and the softer, twisted, gnarled, fluffy, gaunt shapes of trees, leaves, shrubbery and ground-cover makes a very pleasing effect. In any Wright house, you're likely to feel alternately as if you're in a kind of cave, or up among tree limbs, or floating in a water-way. This interpenetration of wild and built, nature and made precinct is now one of the hallmarks of modern design, though as recently as the 19th Century, inner and outer worlds were considered discrete, and nature was something to be pushed away from the ordered, safe interior of artificial space. 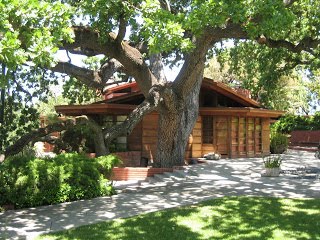 In scenes from this property, it's clear that the natural and human spaces have been integrated into a symbiotic whole, where both are meant to belong. 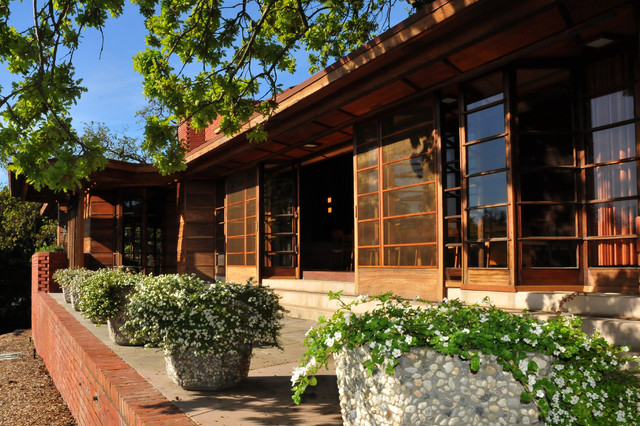 It's an architecture of conviction, but Wright's projects were not without their problems. Builders and owners nearly always had issues with his structures. They were almost always considered "beautiful" but not always completely thought through. Roofs leaked, walls cracked, rooms might seem too narrow or cramped, sometimes the heating didn't work, and too much sunlight might fade furniture and furnishings. Like most prima-donna designers, Wright sometimes seemed more interested in how his structures would be perceived in magazine layouts, than in how well they worked as homes. And some of them have not held up well over the decades.

But how much do we care about the comfort of the inhabitants? Mies van der Rohe said that women didn't wear high heels because they were comfortable, but because they thought they looked beautiful. Which sounds like a smart retort to pretentious design critiques, unless you acknowledge that women are unlikely to wear high heels at home to wash the dishes or read a book. Home isn't for show, it's for daily living.