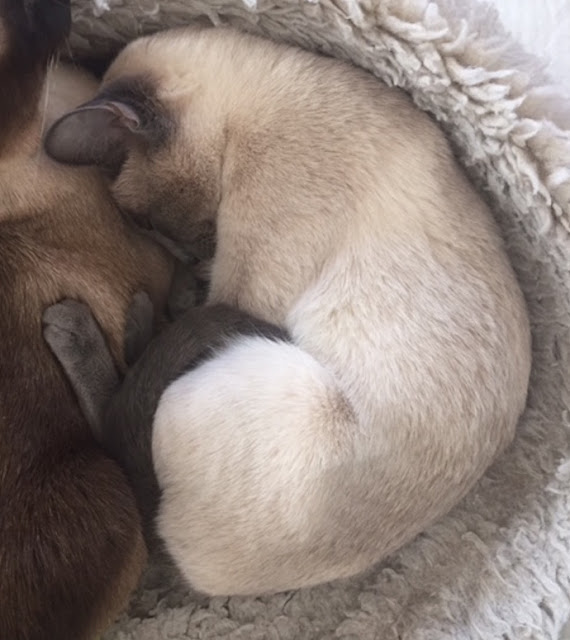 Lily Sabine, sleeping, so curled around her intent, dreaming no doubt of escapades and adventures, from the past, or soon to come.

Do dreams serve some purpose in the riddle of survival and genetic mutation?

Since we can't know what it feels like to be "inside" another animal, another being, we can only guess what they dream. We assume that other mammals dream, since they exhibit the same twitchiness, rapid eye movement, and distraction which we have learned to associate with active "unconscious" narratives during sleep.

Are dreams a passageway into our secret meditations, conduits to the unknown? The surrealists thought so, and psychology and psychiatry are both founded largely on an analysis of the involuntary impulses that generate dreams. We live in the "real" world, while conducting a private series of stories or incidents in our imagination, which are parallel to the real but also creative reinterpretations  of it. Perhaps, as has been suggested, dreams are a testing ground or a rehabilitation center which exists to work out problems or try out ideas. The brain may be said to possess a certain autonomy with respect to actual experience, in a sense "acting alone" without our conscious direction.

As I get older, my dreams seem to be getting more involved, more tangled with plots and counterplots. I'm not sure why this should be. My life was certainly more eventful when I was younger, and yet my dreams then tended to be briefer, less complex, though often more lucid and powerful in their immediate effect.

Many people report that they can fly in their dreams--an astonishing proposition since humans have never been able to fly--except artificially, with balloons, parachutes, or in planes. Is it possible to imagine that humans may someday mutate, naturally or artificially, into bodies that could fly? What an amazing thing that would be.