I have been a fan of the 49ers, off and on, for over 60 years. My stepfather, Harry Faville, had followed the team from its inception in the late 1940's, and by the time television arrived in the mid-1950's, he'd become a confirmed armchair athlete. As a boy, I dreamed of becoming a star receiver or defensive back, but I wasn't built physically to be a football player, and that idea quickly dissolved by the time I was in junior high school. In those days, people didn't worry about the fate of professional athletes. They might be injured from time to time, but it wasn't a concern. Similarly, the political opinions of professional athletes was never something fans or the media paid any attention to. In those days (the 1950's) public figures such as athletes, Hollywood actors, artists, or national heroes might have personal beliefs and sentiments, but they weren't considered important to the general public. Fame itself wasn't a credential.

All that has changed, of course, over the last half century.

Today, in our media-drenched world, everyone is supposed to have an opinion about everything, and what celebrities, and private citizens think or feel about any issue, is presumed to be newsworthy and important.

If Y.A. Tittle or Joe Perry had had opinions about Senate races or race relations, the media in those days would certainly not have considered it worth reporting, and hardly anyone would have cared if they had been. We didn't expect celebrities or high profile athletes to advise us about politics and public relations issues.

Today, we expect Barbara Streisand and Sean Penn and Meryl Streep to tell us what they think about political candidates, and important public issues. They have a lot of capital, and they can make an impact not just with their pocketbooks, but with their public personas. Today, professional athletes may presume to offer their opinions on any subject, and we're expected to listen seriously to them, as if their fame, and their accomplishments on the field of play, made them qualified to speak with authority. 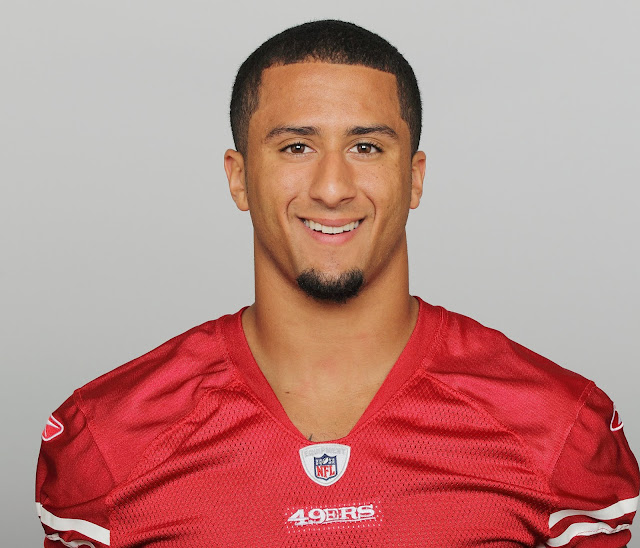 Colin Kaepernick came to the 49ers as a rookie in 2011. In very short order, he established himself as the team's star quarterback, leading the team to a Super Bowl berth in 2012 (which he missed winning by a whisker on the last play of the game), and to a 12-4 record (and a play-off appearance) in 2013. Kaepernick was tall, strong, fast and presented defenses with the quandary of having to cover his runs as much as his passing. Following the 2014 season, team management ushered head coach Jim Harbaugh out the door, in what must be one of the stupidest moves in the history of sport.

After two stellar seasons, Kaepernick was faced with having his role redefined by an unqualified line coach who understood nothing about guiding an NFL offense. As the team tanked under Tomsula (in 2015) and Kelly (in 2016), Kaepernick was blamed for much of the team's lack of success.

Kaepernick was not designed to be a traditional pocket passer. Harbaugh understood that, and used him in such a way as to maximize his gifts. The frustration which hung over the team the last two years, came increasingly to be focused on his shortcomings, rather than on management's failures to find a suitable coach. Owners who blame good players for their teams' poor performance, are scapegoating, and that's exactly what happened to Kaepernick. 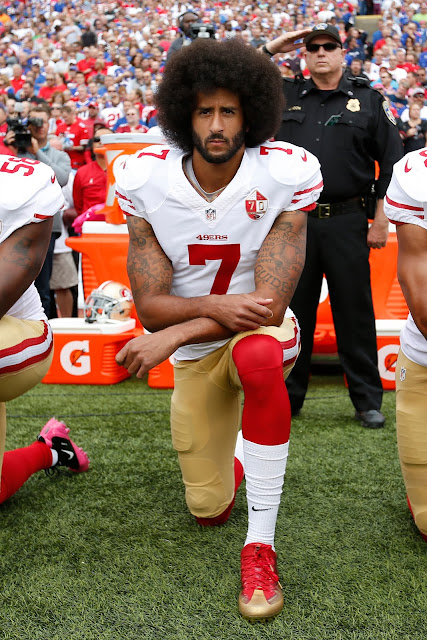 Some of the frustration of the team during the 2015-16 seasons inevitably rubbed off on the players. It can't have been easy for Kaepernick, who had basked in the limelight of a Super Bowl appearance at the age of 25, after only two years in the league, to deal with the negative publicity aimed at him and his team.  In 2016, he began "taking a knee" during the National Anthem played before games.

I have mixed feelings about the purpose and importance of our National Anthem. On the one hand, I resented having to parrot the "under God" clause in the Pledge of Allegiance. My stepfather Harry, once said that he felt playing the Anthem before every professional sports event, actually diminished its value and weight. Does playing it in this way--over and over (162 times for each game in a major league baseball season!)--really reenforce patriotic feeling and commitment, or is it just a distraction and cliché, going through the motions for the sake of appearance?

Patriotism is a mixed bag. In any democracy, we have the right and obligation to form our separate, various opinions about issues, and to be suspicious and skeptical about what is expressed or advocated in the name or spirit of patriotism. In wartime, patriotism serves to unite and reenforce our devotion to the nation's cause. In peacetime, it may have other purposes.

The idea that a protest of social or political conditions should be directed at the government, and its symbols (including the flag, or the National Anthem, or the Pledge of Allegiance) is a hotly debated topic. Context is very important. If Arabs burn an American flag in the streets of Cairo, that is a very different thing than kneeling during the playing of the National Anthem during a sports event.

Public sporting events are not underwritten by our government, and they aren't by any stretch of the imagination an expression of patriotic feeling. They're entertainment, presented for the enjoyment of their audience(s), and for the sake of profit. The National Football League is a private league, a collection of very rich men and women who invest in teams and facilities as a pastime to generate financial gain. The same is true of the players, who are paid handsomely for their service.

But why should we think that star players such as Colin Kaepernick, or Tom Brady, or Steve Young should be any more skilled or qualified to advise the general public about important political or social issues than anyone else? Does their ability to play a game well suggest that such figures deserve to be regarded as experts? Though most of the players in the NFL went to college, no one would suggest with any seriousness that as a class they have anything interesting or persuasive to offer about important issues.

When Colin Kaepernick first began to be seen in public as the face of the 49ers franchise, he didn't even look to me to be African American. With his short haircut, and typical midwestern speech, he seemed a well-balanced fellow, neither excessively vain nor modest. But over time, he began to change. He grew big "Afro" hair, and had an air of resentment which was obvious on the field, and in front of the microphone. As the team's fortunes declined, he seem to want to transform his persona from one of talented athlete to that of a rebellious malcontent, as if to compensate for the decay of his reputation.

Personal resentment can sometimes get mixed up with a false sense of entitlement. Kaepernick never struck me as particularly intelligent, so his increasingly "politicized" stance seemed to me to express an unfortunate confusion of opportunity. He ought to have let his commitment to his job, and his success on the field, be his statement. To use his celebrity and visibility to harangue the sports audience with his personal protest, was impertinent.

If Kaepernick and other professional sports figures want to express their opinions about politics, they should do so in print, or in other venues. While I'm not personally invested in the notion of the public display of patriotism, I'm also inclined to view the opportunistic expression of personal opinions in sporting events as grossly inappropriate.

Since professional sports franchises are business ventures, there is no legitimate appeal to the league for personnel decisions. If owners want to sign some players, and not others, that's their choice. If they wish to express their political or social opinions through their running of their franchises, that's their right. Owners are not required to hire or fire according to racial quotas, or to fulfill some idea of social justice.

Personally, though I abhor Kaepernick's political antics, I think he's a very good player, and deserves to play. But he's responsible for his behavior. He may have the right to kneel during the National Anthem, assuming his boss(es), the team owners and management allow him to do so, but that doesn't in itself entitle him to be hired to play on the field. And it doesn't suggest to me that he's due some extraordinary esteem or admiration.

Kaepernick has made a choice, one which you may or may not admire. But that doesn't suggest that any owner is obligated to hire him to play quarterback in the NFL. Kaepernick may eventually come to regret his career choices. There's a risk in taking controversial positions in public.

Resentment politics of either the Nazi or the other socialists, seem to dominate now. You'd think that sports would be the one place where merit still mattered.