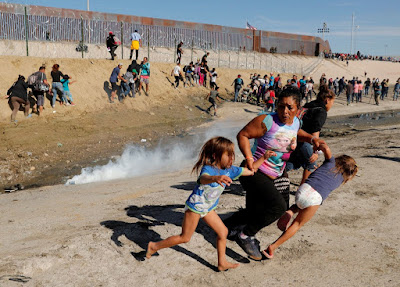 Meanwhile, volunteers have come forth offering to "adopt" Mother and child. Luz is taken the next day to a detention center, where her claim of refugee status is recorded and she is given a hearing date and released. Because she already has multiple sponsors, and an assigned lawyer, she's allowed to relocate to her new home in Minneapolis at once. "It's like a dream come true," Luz confesses, "I knew God would hear my pleas, now my son will grow up in the promised land, and we can live in peace and harmony forever."
Posted by Curtis Faville at 11:24 AM

the consensus i came to understand was things were fine when the border was generally open people walked back and forth to work for a day for a week for a month for a year...these same people sent money to their loved ones back home...most of the discontent came from people who owned land near the border from gated communities and golf course managers who were horrified when small groups would camp out for a night in a shaded protected area and take water from the sprinkling system and poop in the sand bunkers

the crime is truly this:
the price tag we put on land


i admire your persistence