Going Material: The Recklessness of Not Being Mistaken [2019]

It was a busy year, mostly devoted to my book business, with this one big project, undertaken at the end of 2018, and completed in July.

I've always had an ambiguous position with respect to publication. As an aspiring poet in the early 1970's, I was often disappointed that the works I got published were invariably those which I felt least represented who I was as a writer. Of course, the act of publication is as much a process of self-discovery as of pure intention and will, as you are always finding out what your work means through the projection it creates in a variety of settings.

When I took Harry Duncan's typography course at the University of Iowa in 1970, I was attracted to the aesthetic and physical qualities of type, paper, binding--those manifestations of "literature" that both are and are not the essence of language art. At the same time, I was influenced by the poetic innovations that my teacher Robert Grenier was making in textual space. The underlying implication of his presumption was that a writer must be willing to claim the spatial and physical limits of his medium, lest he cede part of his creative impetus to typesetters, editors, publishers and book designers. Though I've always been generally traditional in my apprehension of the book, I eventually came to believe that the more control I could wrest over a text I made--its final realization as material text--the better I would feel about the finished product. 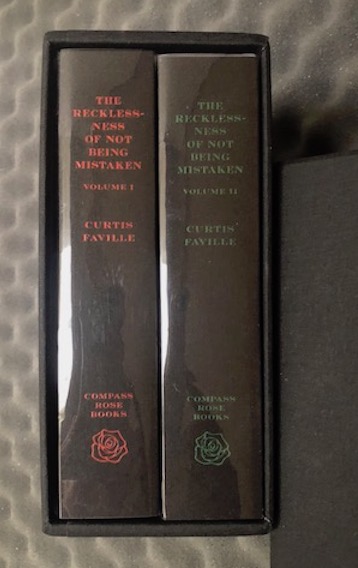 I started this blog, The Compass Rose, in January 2009. Over the course of the next 9+ years, I'd compose over 900 entries, covering a wide range of subjects and preoccupations. It wouldn't have occurred to me when I began, how many there would be, or how much text I'd eventually generate. And it didn't occur to me until somewhat later, that this growing body of essays might comprise something like a meaningful whole, a statement of something like a consistent point of view. People who write diaries certainly share the same kind of accrual of material as a regular blogger does. Indeed, the diaries of famous writers constitutes a whole segment of literary remains (think of Virginia Woolf). 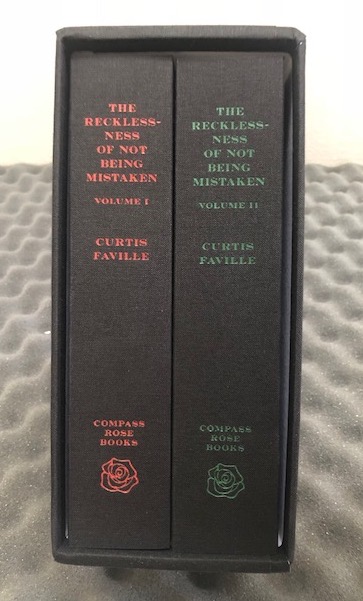 As a professional bookseller specializing in rare first editions and desirable collectible copies, I routinely see elegant and custom printings and bindings. There are kinds for every taste, though paper and leather and cloth and glue are not, in and of themselves, magnetic objects, even if cleverly put together. Though I well appreciate the true antiquarian item, perhaps bound in sheepskin vellum or treated kid, my taste also extends to contemporary book art. 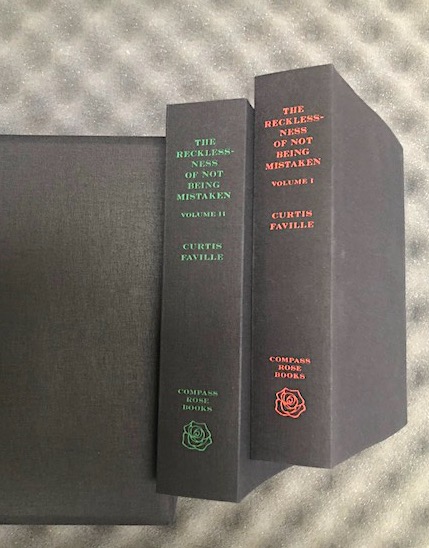 When it first occurred to me to make a selection of my blog essays for publication, I imagined that the resulting volume would be perhaps 500 pages. That seemed to be a fitting dimension, and I set out to edit the 900+ essays I'd posted online over the years. I had vague notions of order and preference, but as this process progressed, it became harder and harder to whittle it down. That single volume grew to 700, then 800 pages, but in due course it became clear that a second volume would be necessary. There are some 200 essays in the set, about 20% of the total number posted online. I was somewhat astounded at the number of pages (or words) this represented. If someone had suggested to me when I was a younger man, to set out to make a ten thousand page document--of any description--this would have been daunting. Yet the actual work, spread out over a decade, was not taxing. 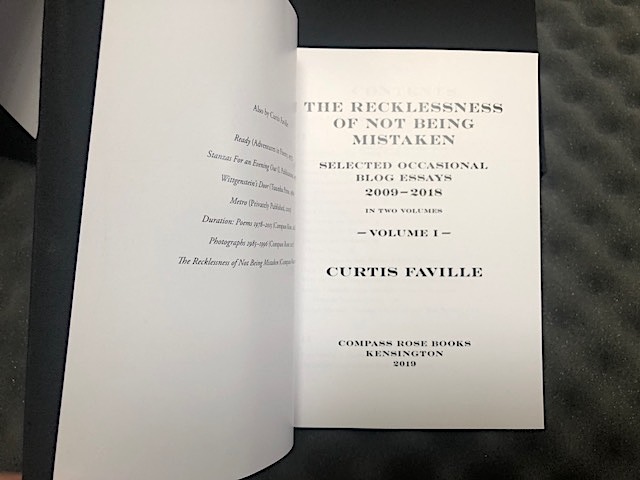 Just as I had known when I started the blog, that I wanted to extend its range of subject matter broadly enough to encompass many different aspects of culture, I wanted the book version to reflect that same eclectic mix. The Compass Rose was not a literary blog, per se. It had no specific target audience, though those who shared my history as a sometime contemporary poet, would clearly find things familiar or of interest.

What major New York, or secondary literary house, would be interested in publishing a collection of casual essays by an unknown blogger living in the San Francisco Bay Area? I had thought a great deal about this question over the years, even before the digital age began in earnest. Popular book markets have undergone some changes over the last half century, but the presumption of official taste-making still hangs over our literary culture. I've dealt with this question in one of the essays included in this set, "Vanity, Saith the Preacher, Vanity"--which addresses the question of private, author-generated publication. Indeed, the internet itself has opened a whole sphere of "publication" beyond the control or approval of the old publishers' establishment of printers, editors and agents. My blog is one manifestation of that new window, the World Wide Web of media transmission. Is it self-delusion for any writer or artist to believe that fronting the presentation of one's work, without the intercession of a professional publisher or exhibitor, might be a worthy exploit? 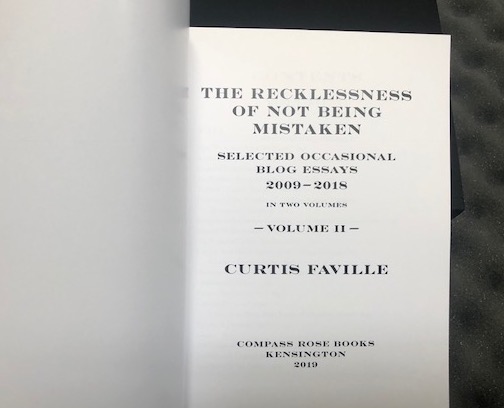 How many deserving toilers have been discouraged by the army of editors and agents, overcome by a wave of rejection? How many works of genius have fallen into obscurity or disposal through misguided or naive criteria? Perhaps such questions are really defenses fronting the armies of mediocrity which are constantly striving for acceptance or legitimacy. 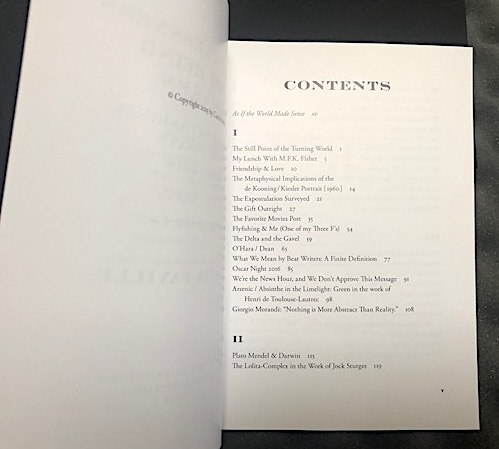 While the writings contained in this 1500 page collection are for the most part traditional in manner and subject, their medium is not.  I'm unaware of any other books of blog essays on the market. Certainly there are non-fiction collections of works that appeared first as newspaper or magazine pieces--I'm reading one right now by Janet Malcolm. What strikes me about many of these more "public" efforts is their marked similarity to what I've been doing online. The internet has been, as much as anything else, a democratizing influence upon the culture, allowing thousands, if not millions of "ordinary people" to "publish" their speech or writing out in the open, where anyone with a computer can access them. It's leveled the playing-field of what was once a closely monitored game. 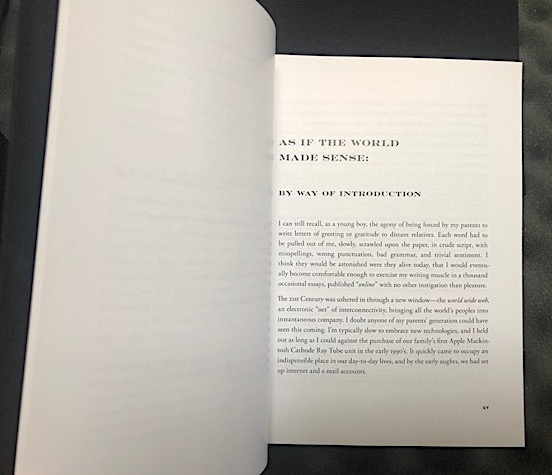 You could describe this publication as a proprietary entity, as it's limited to just 200 copies, 5 of which are hardbound (the rest paperbacks as shown here). The binding is an hybrid black cloth-facing stiff paper, which is resistant to wrinkling or curling. I had originally planned to print the titles and so forth directly on to the acetate dust wrappers, but that became impractical. The edition was printed by Edition One in Berkeley, on coated paper (which enabled me to reproduce the illustrations (many in full color) with complete fidelity. This meant heavier volumes in the hand, but a high quality art book feel. 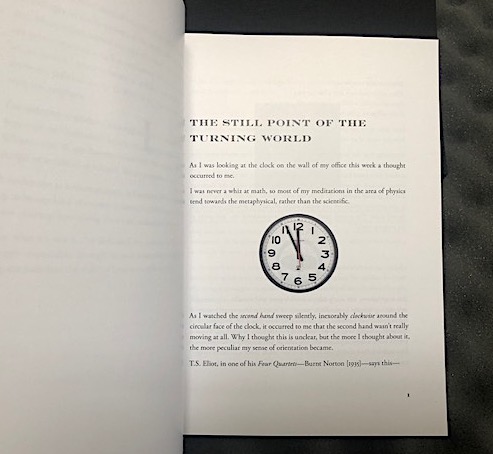 Distribution will essentially be private. I'll give copies away to those who may have expressed interest, or whom I think might find it diverting. Nominally priced at $100, I doubt anyone would seriously consider paying for it. Which is all fine with me. It's an act of pure indulgence. One thing I noticed in the editing process, is that the contents as a whole tells enough about my life that it might be described as a back-handed autobiography, especially the introductory preface "As if the World Made Sense." 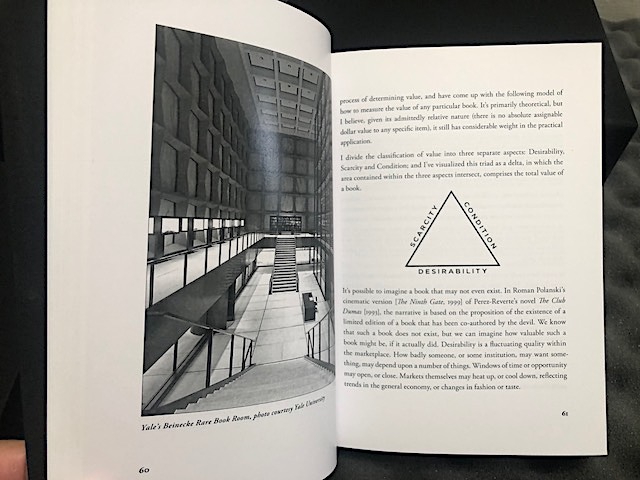 As I say in the preface, I've always liked books--the material text--as opposed to recorded speech or digital display. Ironically, the book couldn't have been as efficiently (or reasonably) produced without the contemporary digital printing technology. That made the production of my book of photographs* possible, as well as The Recklessness of Not Being Mistaken.  People ask me what the title means. It's taken from a poem I wrote over 45 years ago, a series of line fragments written in a disconnected sequence. To me, it's another way of saying that no matter how sure you may be about something, there's always the possibility that you're wrong--a kind of conscience, I guess--and that you may embarrass yourself with excess presumption.

We can never be 100% convinced of anything, so it pays to reserve some modesty for the time when you may be proven wrong. Was it a mistake to publish this collection of casual, occasional blog essays? Maybe. But the pleasure I derive(d) from the exercise more than makes up for the risk of making a fool of myself. Go, big book.

Posted by Curtis Faville at 9:42 AM