Back in April 2014, I wrote a blog piece about abstraction in art, prompted by my finding what seemed to be a stray painter's plywood covered with random spills and can impressions. That got me wondering about the critical meditations people often have written, about the meaning and significance of non-representational art over the last half century or so. Last week three more such plywood pieces appeared at the dump, though these obviously had been "intended" as art. The pieces were unsigned, and I had the feeing their owner had just decided they were either worthless, or had grown tired of having them around the house. Could the owner have been the artist? Hard to say.

Though these are clearly "reasoned" attempts at creating a semi-organized field of color design, they feel weak and "random" in a way that true Abstract Expressionist paintings don't. I've included a couple of Jackson Pollock's horizontal canvases to compare-- 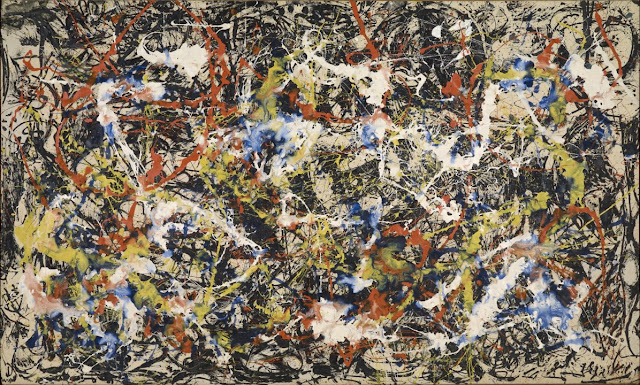 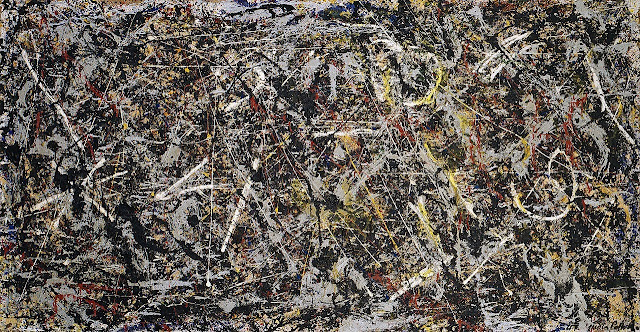 Since the early 1950's, there have probably been countless imitations produced by lesser artists coming late to the party, genuinely attempting to explore or exploit the possibilities first posited by the Ab Ex movement. Most will have been ignored or treated the derision commonly accorded to those who appropriate, borrow, or simply steal ideas from superior hands. Some have probably been encouraged by their contemporaries.

The debate over the value and purpose of making representational versus non-representational art has been going on for at least a century. "Realistic" depictions of scenes or figures rarely rise to the level of photographic accuracy or candidness, though the recognizable aspects of what we know from our own eyes may be re-organized or augmented through the creative use of arrangement or design. Renaissance painters focused largely on classical or religious subject matter, seldom or rarely on day-to-day scenes of the life they experienced in their immediate reality.

Textures and compositions composed primarily of masses of matter are certainly as common to our apprehension as familiar objects, such as faces, structures, events, etc. The image of a rock face, a length of fabric, a folded field, a curling ocean wave, or a piece of weathered wood should be as common to our awareness of the visual spectrum as the "theater" of narratives that constitute the "story" of history, or the tapestry of nature. And yet we're never quite sure how to place them in the pantheon of valuation that preoccupies those for whom such matters are crucial. There is the restless urge to put things in their place, to gauge them and evaluate their importance within the historical time-line of our timed descent.

As man arose from mere subsistence to the settled leisure of making representations with a permanence beyond the merely ephemeral, we began to wonder what it was for. The history of art is a very large topic, and who would pretend to comprehend it all? What seems certain is that the act of making an artifact, the impulse and attraction of doing so, was never more in doubt than when plastic artists began to challenge the notion of "copying" nature, and to imagine alternatives to the depiction of things that might stand as examples or metaphorical versions of recognizable things, with names and templates that viewers could easily accept.

The Dada-ists, Surrealists, and later Abstract Expressionists challenged the connection between representation and denotation, freeing artists from the duty of the familiar function of illustration, de-coupling meaning from its object-status, investing the artifact with an integrity it had never before enjoyed.

If mere "design"--squiggles and loops and shadows and points and blobs--might constitute the whole content of a single work, then almost any surface might qualify as directed seeing, as an aesthetic act. Indeed, the very act of making a work of art could itself become the whole point, its process and duration and immersion in dimensions. Accidents, failures, dead-ends . . . all these things might, through the redefinition of the act, become values, or valued entities.

The question seems to revolve around the notion of a time-line of successive plateaus or pinnacles of definition. After Abstract Expressionism, what would be, what could be, the natural progression of aesthetic development? We had Pop, Op, Performance, Post-Modernism, etc. Each age trying to figure itself out, to put a name or a meaning to the haphazard, piecemeal outpouring of stuff.

If we could establish that the top three canvases had in fact been painted in 1935, would their discovery, now, suggest that the accepted record of the evolution of aesthetic thinking had been skewed, simply wrong? Are the early Renaissance painters pathetic beside the ancient Greek sculptors, who created magnificent, accurate, and deliberate versions of the things of this world? Have we, in the last 150 years, "learned" to regard representation as an obsolete act of slavish devotion, akin to a belief in superstitions and prejudices, neither more nor less entitled than the elaborate finger-painting of the major abstractionists?
Posted by Curtis Faville at 9:08 AM