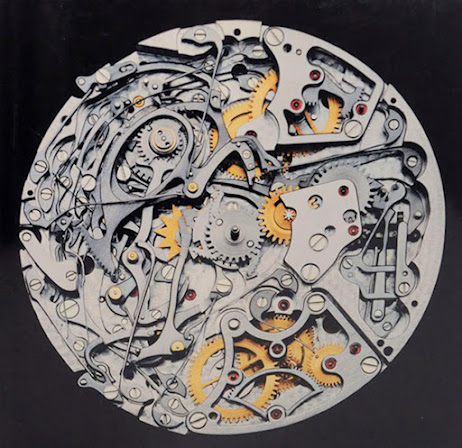 What kind of a mind creates an interlocking configuration such as this?
I suppose, broken down into its subsets, it's a completely logical and straightforward arrangement of parts, coordinated into movements and settings and increments that exactly mark the progress of time. A time piece. A piece of time. A device for the measure of the passage through a dimension.
In the digital age, humans can now create electronic circuit boards that probably make this picture primitive in comparison. It's just an integrated "circuit" made from metal (and perhaps some jewels) designed to move at precise divisions, whose duration is in turn based on the movement of other bodies, i.e., the earth, the sun and other heavenly bodies.
Philosophers of the past might once have thought such an instrument as being almost supernatural in its qualities, just as they surely would have been astonished at the digital technology that drives our interactive techno-culture today. In our time, science and philosophy have merged increasingly together, as speculation has been overtaken by discovery and empirical proof. As theoretical physics becomes more and more abstruse and even metaphysical in its implications, what we think of as miracles seems more and more to resemble reality.
This watch mechanism is diverting to the eye, but it's also a crude attempt at mimicking what has developed naturally in the universe. Bodies are clocks, just as astronomical bodies in motion are. Our hearts beat at a certain rate, though with constant small variations.
Can we eventually create computers that have their own motivations and desires? Or are we mistaken in thinking that our free will is more than an illusion, and that the mechanisms through which we exist have always been determined, by the designs themselves?

Posted by Curtis Faville at 9:47 AM