The Homo-erotic Poem Part I 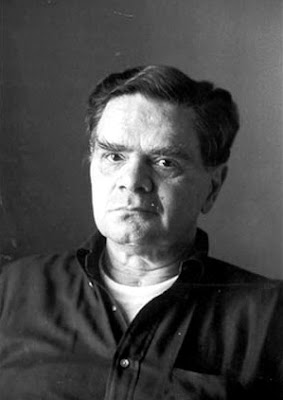 It has always struck me as peculiar that love poems by Gay men are almost always more erotic and specific than those written by straights. There are, I know, countless exceptions, but the general rule seems to be to be generally true. I just finished going through the whole of The Faber Book of Love Poems, Edited by Geoffrey Grigson [London: Faber & Faber, 1973], and my predominant impression is that heterosexual love poetry tends towards the abstract, the merely decorative, whilst the homoerotic is more focused and direct. I'm thinking particularly of examples such as Whitman's "When I Heard at the Close of the Day" or Sir Philip Sidney's "My true love hath my heart, and I have his" which seem more specifically tender and frank than one is used to seeing in traditional (male) love poetry.

Perhaps it is because of the historical idealization and ikonic personification of woman as a pure object (or vessel) which passes down, specifically, from the Renaissance, gathers steam during the Romantic Age, then is chastened by Victorian inhibition. The male object tends less towards the generalized, and more towards an individual.
The following poem by James Schuyler [1923-1991] (photo above) I first read in a pamphlet I found in 1968, May 24th Or So [Tibor de Nagy, 1966]:
A Head
A dead boy living among men as a man
called an angel
by, me, for want of a word,
spaniel-eyed: wet, with bits
of gold deep in the eyeballs
hidden, like a mysterious ingredient
(c'est la, le mystere)
fringed with black and with black,
thick-grown, delicately thumb-smudged eyebrows
and brown cast on the face
so the lips are an earth red
and the rings or pouches under the eyes
are dark, and all the blue
there is hovers in the hollows
under the ridges of the cheekbones
as, in fall haze, earth,
broken into clods, casts shadows on itself:
except what, in the small hours, shows
the razor's path, its wide swaths
along the cheeks and down below
the strong and bluntly heart-shaped chin
where the taut flesh loosens and softens,
heaviest at the corners of the mouth
turning petulantly down from the fold
that lifts the upper lip and points
to the divider of the nostrils.
This so-called angel
who steps back into the shadows of an empty door
and staggers on short flights of stairs
is filled with a kind of death
that feeds on little things:
fulfilled plans that no longer suit the hour,
appetites that sicken and are not slaked
(such as for milk shakes)
lost or stolen handkerchiefs,
invisible contagion
(such as the common cold).
Within this head where thought repeats
itself like a loud clock, lived
the gray and green of parks before spring
and water on a sidewalk between banks of snow,
a skylit room whose windows were paintings
of windows with views of trees
converging in the park all parks imply;
in that head a million butterflies
took flight like paper streamers and bits of paper
a draught lifts at a parade.
Then they went away.
They went away in a dance-step
to the tune of "Poor Butterfly"
played on a wind-up phonograph
of red mahogany stuck with bits
of gold: right stele for him.
When night comes and lights come on
after the colors fade in the sky,
may he minister as he can to whom he may,
himself or other, give what grace
all the little deaths he stands for,
to me, have left him. He is an angel
for his beauty.  So what
if it fades and dies?
This poem is filled with ambiguities, most notably the contradictory mixture of sentiment towards an x-lover, for whom the poet continues to feel an explicit romantic tenderness, but whom he still regards with a half-sentimental, half-amused, pity--one might even call it bitterness. There is a clear condescension towards the boy's immaturity, mixed with a lingering solicitude:  He is "filled with a kind of death/that feeds on little things" as if fussiness, or triviality, were a mortal affliction. The line "right stele for him" seems a very elegant turn of phrase, saying (if I understand it) that the mahogany wood record player with gold inlay is a fitting stele (or "ancient" monument) to the departed "angel" which is also, of course, linked to the "bits of gold" "hidden" in the brown irises--that's it, the mystery. There's one very awkward bit of footwork he performs, in the last stanza.
may he minister as he can to whom he may,
himself or other, give what grace
all the little deaths he stands for
to me, have left him.
Give them what you stood for to me, is left. Or something. It sounds almost courtly in its intricacy--a locution that Donne might have tried. The ironic/pathetic "so what if it [his beauty] fades and dies?" seems fairly straightforward, a send-off, or tip of the cap. The rueful close to a temporary commitment.

This is a graceful poem. Poetry is often about love, but it seldom rises to this level of seriousness, without seeming overly formal, or stiff. Schuyler was a master of the ordinary. He could take a daily occurrence, and turn it into the stuff of elegance and resolution. It's an unique gift.

The next post will be devoted to a similar kind of poem by Jonathan Williams.
Posted by Curtis Faville at 5:15 PM

Mabye because the heterosexual love poem focuses on another soul, and the intertwining of souls, or worlds, in marriage, there is a focus on meaning, as opposed to a focus purely on the body, as a temporary thing in transit, without a soul, or without the mention of a soul (this poem ends with a deliberate denunciation of the soul, and it's only a body, which will die, so perhaps at least for this poet, there is only the body, no soul, no world view [we find out next to nothing about him except that he gets colds]), so perhaps that explains it. There doesn't seem to be any sense that the narrator feels in any sense responsible for the young man. It's rather amazing. There's no sense at all of any kind of mutual caring. There's a kind of admiration for his physique, and other than that, nothing. (Maybe I missed something?)

I love your readings of individual poems. Keep going!

I left a comment but it disappeared, I think.

I think what's interesting about the poem as opposed to a heterosexual love poem (it seems very much arrayed as a kind of battle-figure against the heterosexual love poem), is that he calls the boy an angel (but not a ghostly angel, without a body), instead he's got a body, and in fact is all appetites: for milk shakes, and whatever else he might want. He's a head, emphasizing his physicality, with each part described, and he gets colds.

There's a little bit about the parks inside of him, but no real relationships of any duration. He "ministers" to whomever he pleases (again seemingly to strike against religious heterosexual marriage, and the concept of monogamy), and yet, we don't find out anything about him much at all.

He will die (he doesn't have a soul).

Heterosexual poems often emphasize the soul that two will build together. That it is a merging of worlds, and so on.

This is about how they will remain separate, and he doesn't care if he dies much at all (this is also seemingly arrayed against sad love poems about the death of a loved one). In this case, he's just happy to have had him, I think, and if he dies, too bad.

He was beautiful, physically, and that's that.

I like how you read individual poems. I can usually follow what you're saying, and it interests me.